Setting Goals – How I decided on 2:37 for My Marathon Target

Earlier this year I picked running a marathon in under 2:37 as my challenge for 2016. Because this challenge is very specific, I wanted to spend some time discussing my thought process behind it. I think it will help add context to this particularly goal and how I approach goal setting in general.

Deciding On A Level of Difficulty

The first thing I do when setting a goal is decide on how difficult I want it to be to achieve.

I am an extremely competitive and motivated person so I like to pick challenges that will stretch me. I like to be scared that I won’t be able to achieve it so that I have to be resourceful in order to succeed. I like the process. Standing at the peak isn’t the end that justifies the means for me, it is the means for me justifying the end that is the hard work, ingenuity & learning along the way.

The problem with setting really challenging goals is that they can eat up a lot of time, money and other valuable resources. Last year I discussed the problem with escalation and it was something I thought about again this year. I wanted to have something that challenged me but that wouldn’t eat exorbitant amounts of time, my most limited factor right now.

On the opposite side of the spectrum, the problem with setting goals that are too easy is you don’t take them seriously enough. I realized about two months into my Ironman training in 2014 that I could have finished the race right then. Without a higher goal in sight, I would have had a hard time justifying more training. I would likely have just done a bit more casual training until the race and then retuned a mediocre result. I’ve done that before with other things, and learned that doesn’t satisfy me. It misses out on the process, which is the best part of setting goals that are often arbitrary and ultimately meaningless.

On top of all of this, when setting a challenge it is important to consider context. What else do I have going on this year? How will this be affected positively or negatively by other efforts I’m undertaking. For example trying to have a baby, launch a new product at work, surf Mavericks and complete an Ironman all in the same year would be unwise. (also known as 2014)

For this year I decided I wanted my challenge to be really difficult, no matter what it was. The main reason being that I’ve succeeded at my last three. That might seem strange, but the measure of good stretch goals is that you periodically fail. If you don’t, you’re likely not stretching yourself to your maximum. I’ve decided that failing 1 out of every 4-5 is a good litmus test. That means that if I succeed at this, next year’s challenge will have to be impossibly hard.

I narrowed down my list to a few challenges but ultimately decided on running a marathon due to a few things:

Having decided on running a marathon & wanting to take full advantage of my marathon running peak, I decided to shoot for a really fast time. This might be the fastest I ever clock.

So what should I shoot for?

For some context, I’ve never raced a marathon before. If I had, I would likely have based my goal on my past performance – perhaps aiming to improve by 5% or something.

Without the benefit of that experience I have to use other methods to first understand what was reasonable for me, and then to set a goal that would be a stretch.

During the training for that race I did a 20 mile run at 7:30/mile the day after a 90 mile bike ride. Had I done 6 more miles at that pace it would have put me 3:16:30. I was confident I could do that again if I got into similar shape. If I was running fresh off of a taper, I would estimate being able to break 3:00.

The second thing I looked to was information to help me compare past races I had completed to this distance. Fortunately there are some great tables, unfortunately, there are a few and they don’t always disagree. 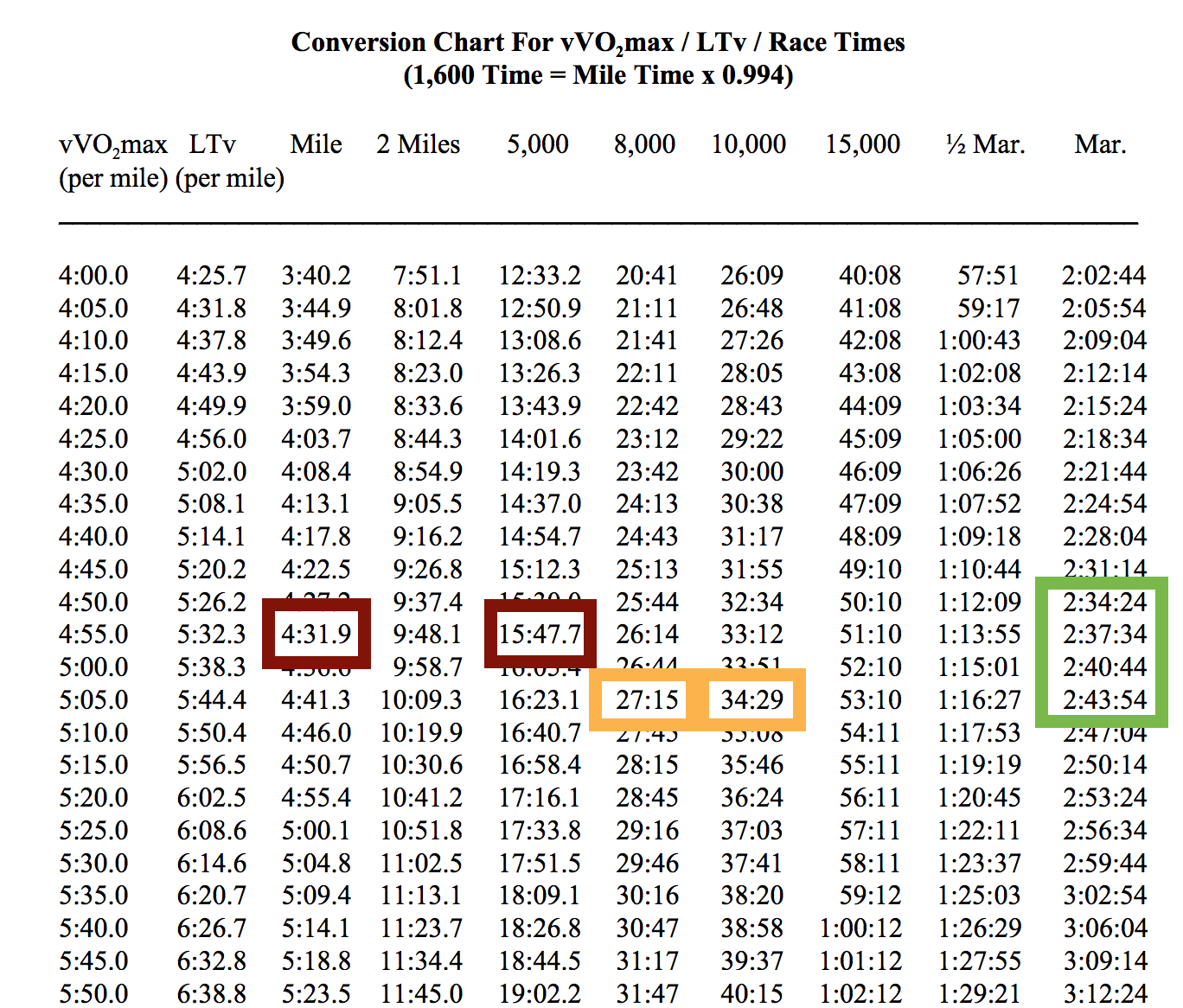 The next thing I did was similar to the above but more anecdotal. I thought about a few friends I had raced a lot with and their peak performances.

Josiah, referenced above was always a few notches faster than me, ~20 seconds a mile in the 5k, and recently ran a 2:29 marathon. Chris, another college teammate, is someone who I still argue with about who was/is faster (I’ve got the PRs, championship races, and local newspaper cover on my side). He ran a 2:46 a number of years ago (though I misremembered it as 2:43 when I was planning).

This puts my target somewhere between those two times, likely closer towards the latter.

When setting goals, it is always nice if there is a significant milestone to aim for. The New York Times showed that people really like aiming for arbitrary round numbers, which has its pros and cons, but clearly affects performance as indicated by the various spikes.

As I looked at the marathon, a few milestone times came to mind for me

As I reflected on this list 2:59 felt like a safe bet – something I should be able to do barring any injuries or unplanned setbacks. 2:53 and 2:46 an appropriate challenge. I would be excited to hit between those marks. 2:37 to me is a major stretch – I will probably not be able to do this in my first year racing marathons. That is why I’m so excited about this year.

As I shared this goal, I got some comments that shooting for too fast of a time might hinder me – that being more realistic would ensure I didn’t crash.

I wanted to emphasize two things.

3 thoughts on “Setting Goals – How I decided on 2:37 for My Marathon Target”