I detailed my 2020 focus here (read that first if you want more context). Here is how I’m progressing.

This theme is all about accomplishing as much as possible with as few resources as possible. It is basic economics – scarcity & objectives. For me the limited resource, at this point in my life, tends to be time and so that is my focus for the year.

I’m using ‘action economy’ a concept from boardgames as a paradigm to think through this theme. With that in mind, I’ve been playing a lot of board games over the first three months of the year. I learned a new game called Twilight Imperium, which is one of the more complex & involved boardgames, and can take 5-10 hours to play. I attended a weekend board game convention, setup a biweekly board game night with friends, plus have a few groups at work I play with (in person previously and now online during the lockdown). This is appropriate for the theme of the year but also part of my winter coping strategy. This early part of the year is usually long, dark & wet so staying indoors and playing board games is something I can look forward to, which helps me deal wit the time of the year I don’t look forward to.

I intend to start taking this board game thinking and applying it more to life in the coming months.

I’ve done some light thinking on this, enough to start recording data about a few tasks, but not enough to evaluate them. The crux of this issue will come down to how much I value time. Often I find that achieving a goal is a simple tradeoff between time & money. Should I build the thing myself over two hours or pay someone $400 for a pre-built one? That depends on how I value my time.

From some light thinking on the value of time I know that it should somewhat correlate with my hourly rate & my earnings potential. It should also likely relate to what I will learn by doing the task myself and how much I enjoy doing the task. I need to formalize all of this a bit more and build in a model that allows me to tweak some assumptions. One of the trickiest parts of this is that the value of my time will be impacted by future things I have no control over or can’t yet foresee. For example if I were to get laid off, my time would become much less valuable very quickly as I’d have more of it available but if I were to suddenly adopt three more children, I would have a lot less time and thus my time would likely become even more valuable, certainly in the short term. I’m not sure that either of those will happen, but either is a possibility.

As mentioned above, I haven’t done much thinking about the model yet, so I haven’t put this into practice much yet either. I’ve taken two very concrete and simple projects and recorded data about them though, to help me evaluate them once I do have a model.

The first related to my fitness watch breaking. One day in January it suddenly fell off my arm when the rubber strap tore. I use my watch for helping me actively maintain my health – tracking sleep, activity & runs – so replacing it was important to me. The question was, how best to do it? I could do any of; buying another of the same watch online, take time to research if a newer and better model had been released, try to fix the rubber strap, contact the company that made it and see if it was under warranty, etc. I actually did a few of those so I could measure the real time and money it took to do each. Now I have data, but it is still hard for me to answer which one was the better path without having a model to compare the value of time, money, energy, etc.

What a fun year to pick Warren Buffett as an exemplar. 2020 has started out with the fastest (and one of the largest) stock market crash in history. Buffett is famous for beating the market in times of growth and contraction. Most of that is due to how he values companies and his involvement in them. I’m getting a real time load test of things I’m learning about him and getting to watch him in action.

Tangibly, I’m 1/4 of the way through the best regarded biography about him and I’ve chosen to take a financial stake in his company, Berkshire Hathaway. When I decided to invest with him, to give me some more stake in following along with him, I was surprised to learn that a single share of BRK-A sells for $300,000 – meaning that is the smallest amount you can invest. Thankfully at some point they released a series B of their stock (BRK-B) that trades for only $200, allowing me to buy in at a much lower point. I would love to one day own a share of BKR-A though, something to put on the bucket list.

What an interesting time to plan an adventure.

It is unclear if I will be able to do this, as many parks are closed due to social distancing rules right now. The waterways aren’t closed though, so this might end up evolving into more SUP and less running.

That said, if things return to normal, I’ve picked the location for my adventure. A worm-shaped lake on the border of the US & Canada called Ross Lake. It is a glacial lake, cut out of a mountain by a river of ice. The turquoise surface, 1.5 miles wide, stretches 20 miles in length through the North Cascades, a remote wilderness area of rocky, glacier capped mountains. There are remote peaks that usually require days of hiking to get to on either side of it. I think I can string together a course that lets me cover a peak on each side (North, South, East & West) including two countries (US & Canada) by running 100+ miles and SUPing another 50+. I’m super excited about it.

In order to prepare for it, I’ve been updating my gear this winter. Since this push will likely take me multiple days, I started research a new sleep setup, that is lightweight but much more comfortable that sleeping in the dirt with nothing but my clothes, like I did last year on my Mt. Rainier adventure. As part of that I learned a lot about insulation, heat loss and equipment materials. My basement has been a combination REI & science lab of sorts – I’ve been conducting research on the gear, weighing it & testing it out by sleeping nights on various combinations with the basement windows open to see what provides the most comfort for the least size and weight. Would I rather have a warmer mattress pad that weight 4 oz more or 4oz more down in my jacket to keep me warm? Or both but have a heavier pack overall? These are the fun sorts of questions I’ve been answering this winter.

I’ve landed on a simple setup of an inflatable mattress pad + pillow, a heat-reflective bivy sack and a down jacket. The whole sleep setup only weights ~3 lbs, (just a little more than the fleece + rain jacket I brought last year), takes up even less space, but provides much more warmth and comfort. It is warm enough that I can get decent sleep for 3-4 nights but light enough that I will still be able to run with it on my back. I also found a few other ways to cut weight, by buying lighter gear (ex. a 1oz pocket knife instead of my 4oz one). Overall I think I should be able to keep my pack weight under 10lbs, especially if I design the trip in a way that I can restock food periodically – I’m thinking of doing that by alternating between running & SUPing and keeping my full supply of food with the paddle board, stashed on the shore while I run a loop/peak. That will give me a chance to restock with each paddle, meaning I only need to carry 2-3 lbs of food at a time. 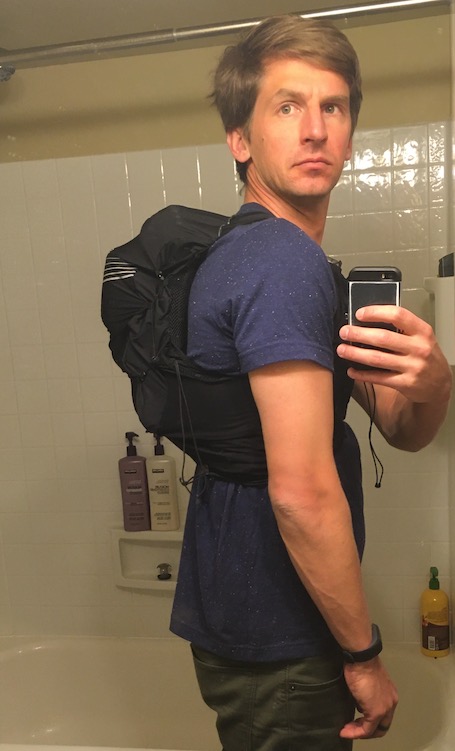