On Saturday June 19th, 2021 I did not finish the Gulch Countdown race, getting disqualified after ~30 miles. Out of 46 runners, I finished 7th overall. This is the race report. 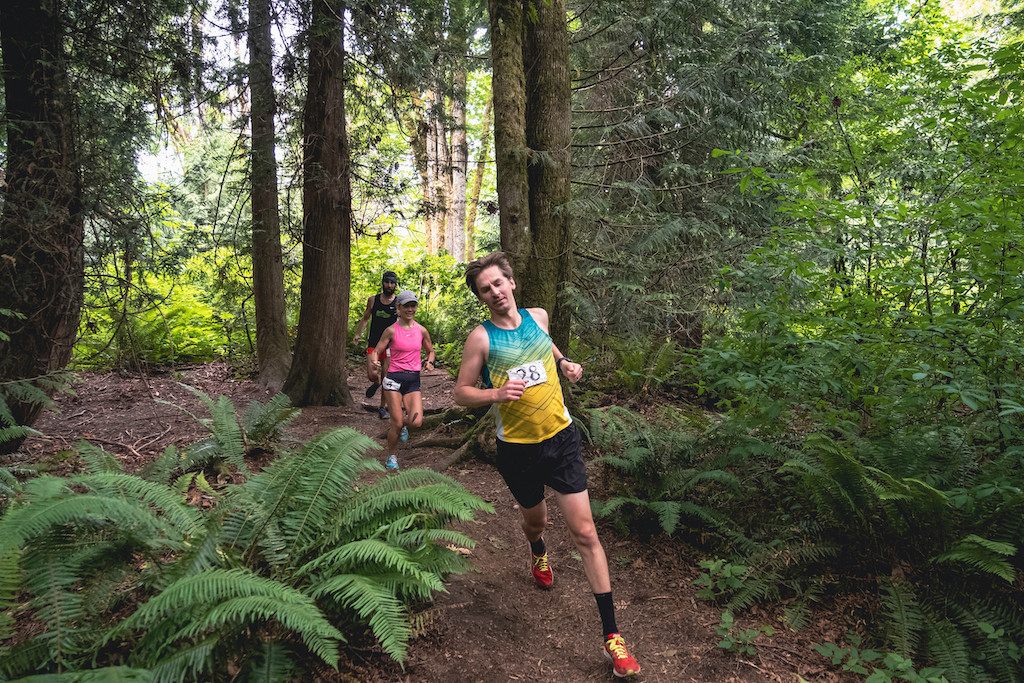 I ran this race in 2019 and wanted to beat my result there, where I was DQd on the 12th lap

For those not familiar with the race, it is worth a quick note as the format is pretty unique. It consists of 2.2 mile long laps on a muddy, hilly single-track trail that start and end at pre-set times of decreasing duration. Anyone who finished the last lap before the cutoff is allowed to start the next one. Finishing a lap early just meant you had to wait around for the lap to finish, you’re welcome to eat, change clothes, visit the bathroom, etc. but there is no real advantage of finishing early. The pace of the first lap was ~15 minute miles, by the time I got eliminated the pace was closer to 9 minute miles (a flat ground equivalent of ~7:30 miles). 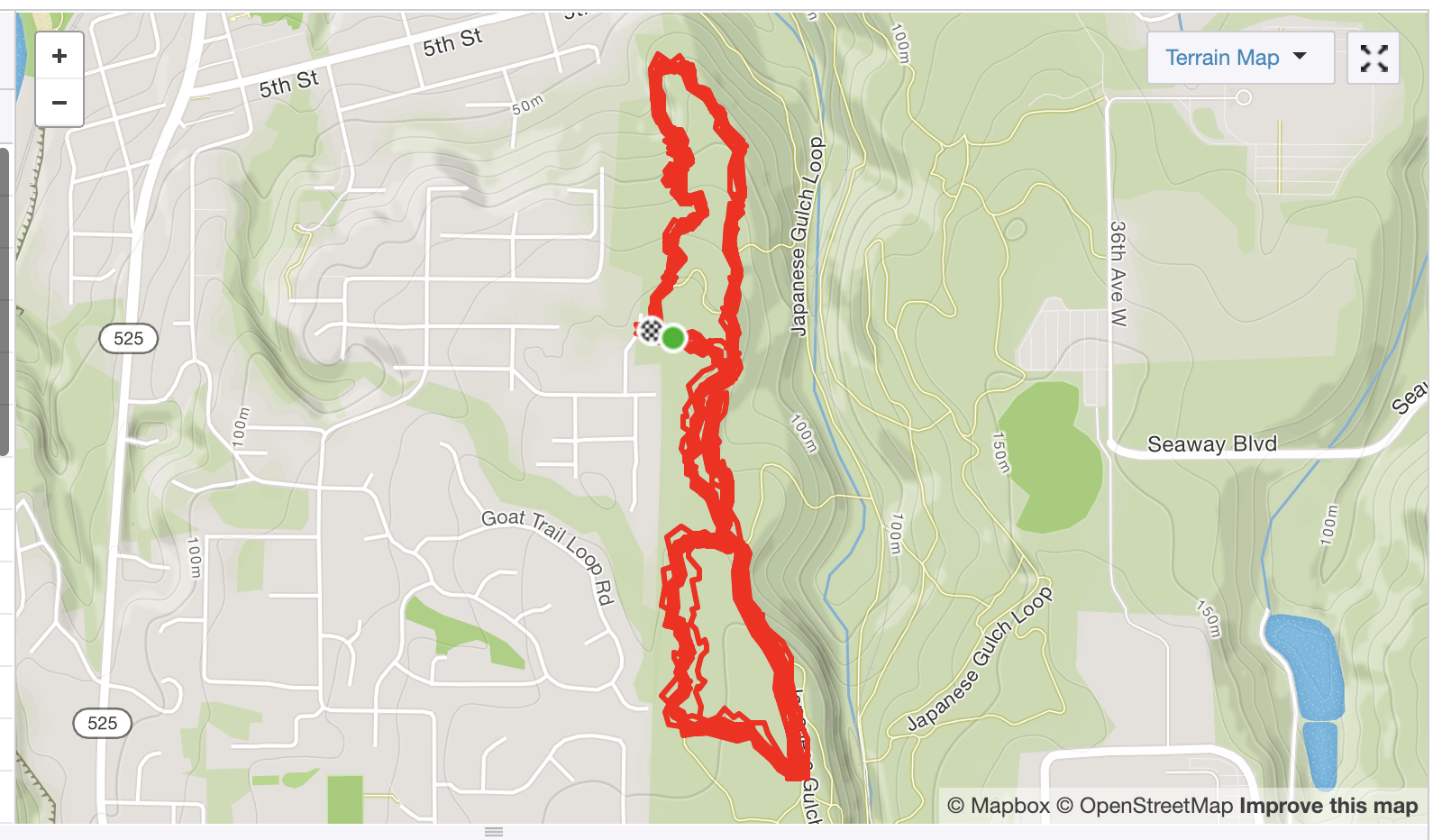 I planned to use this race as a tire kick for the trail 100 miler I run in August. I’ve been training a decent bit, although unconventionally (see my training plan here), so I thought I’d be in pretty good shape and able to do better than previously. If my training wasn’t working well, this race would be a good way to find out as a number of the other racers will be running with me for the 100 miler in August.

Having learned from last time, in which I brought way too much stuff, I had a pretty simple setup with some food I could grab between laps and a few pairs of shoes in case I felt like running in something else. 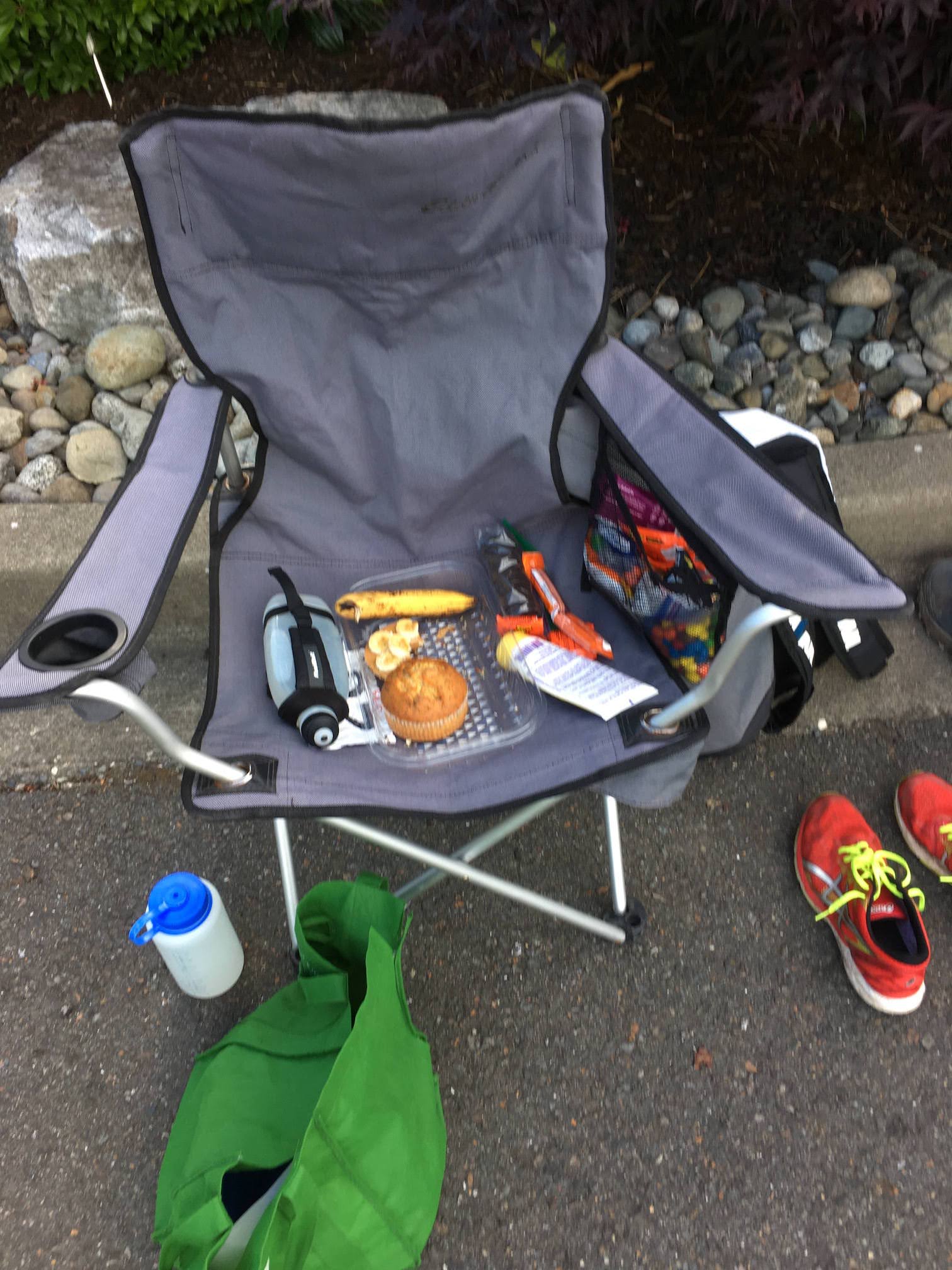 I had planned to split the race into three lap chunks where I would have a different strategy. Because of the cutdown, each lap is really unique in its requirements, but I found having batches was easier to remember. 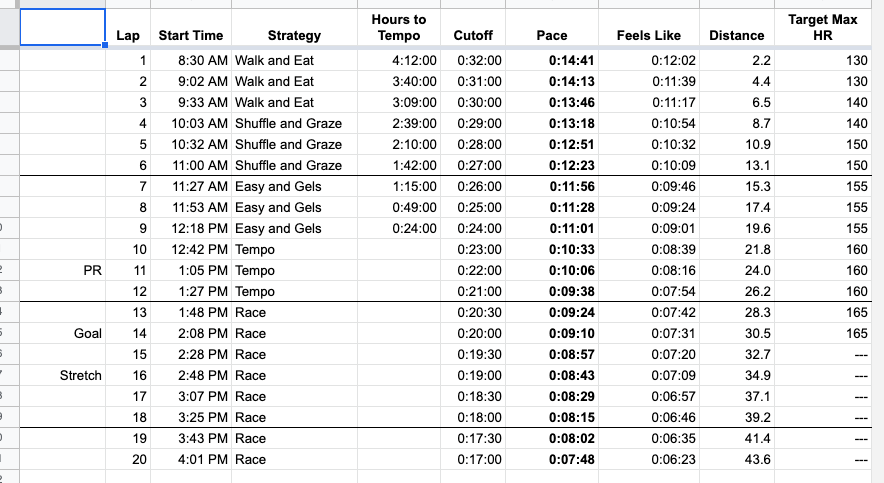 My strategy for the first three laps was ‘walk and eat’. I tried to go as slow as I could without getting disqualified and was shoving my face with food so my glycogen stores would be full when the real running started 5 hours later. I managed to do a pretty good job going slow – the first three cutoffs were 32:00, 31:00 and 30:00 and I finished the laps in 28:53, 29:45 and 28:38. I’d say I walked 90% of the lap but I did jog a little bit in parts to make sure I wasn’t cutting it too close. My average heart rate was 127bpm which meant I was saving a lot of energy.

I found a few runners that liked my strategy and I led a pace group of ‘just barely beat the cutoff’. In the end, we all set PRs for the race, so I think this strategy worked really well. 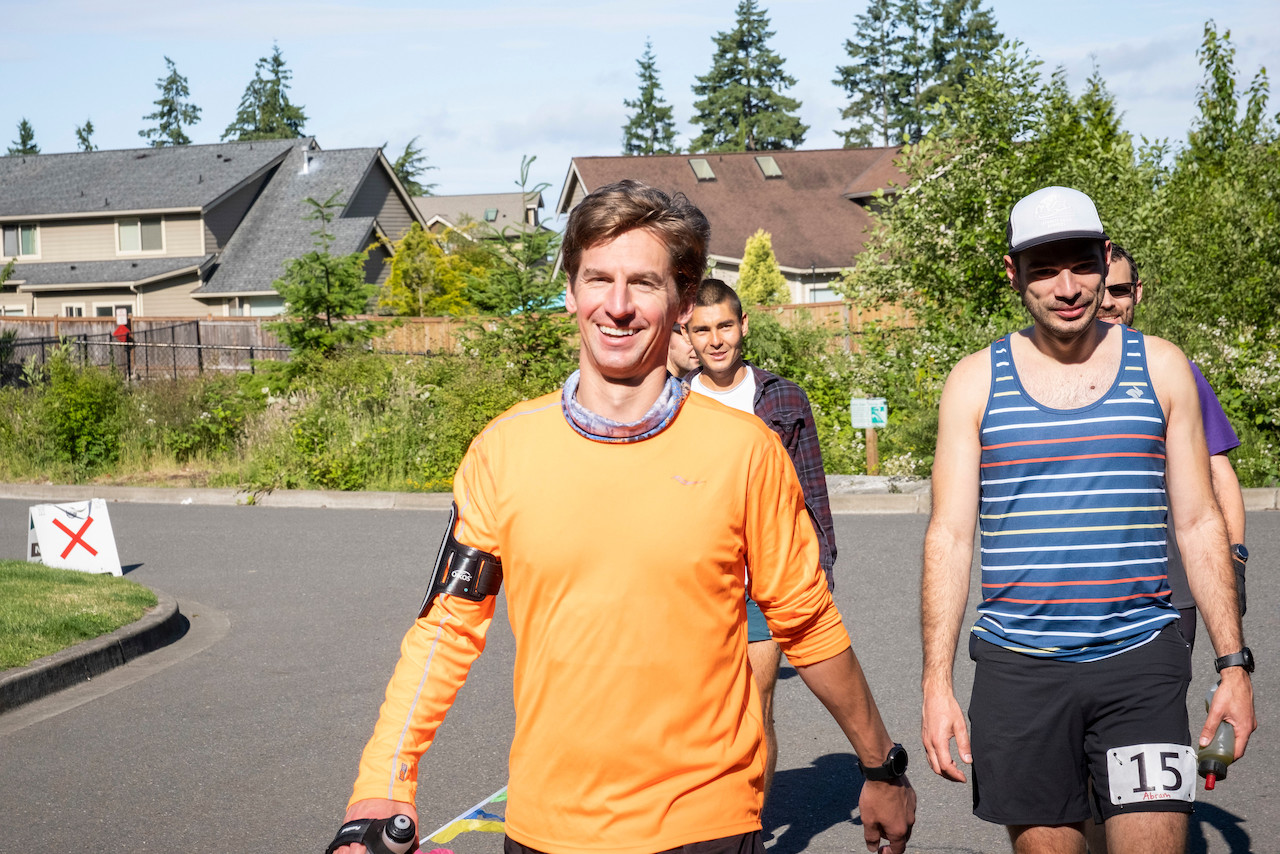 For laps 4-6 I shifted my strategy slightly to ‘shuffle and graze’. I figured I’d have to do something that looked more like a jog to hit these marks. For the first lap I planned to go a little faster to give myself a longer break to visit the bathroom and change my shoes. In past years the course has been muddy but it was in great shape for this race, so I decided to switch into racing flats to save the extra weight. 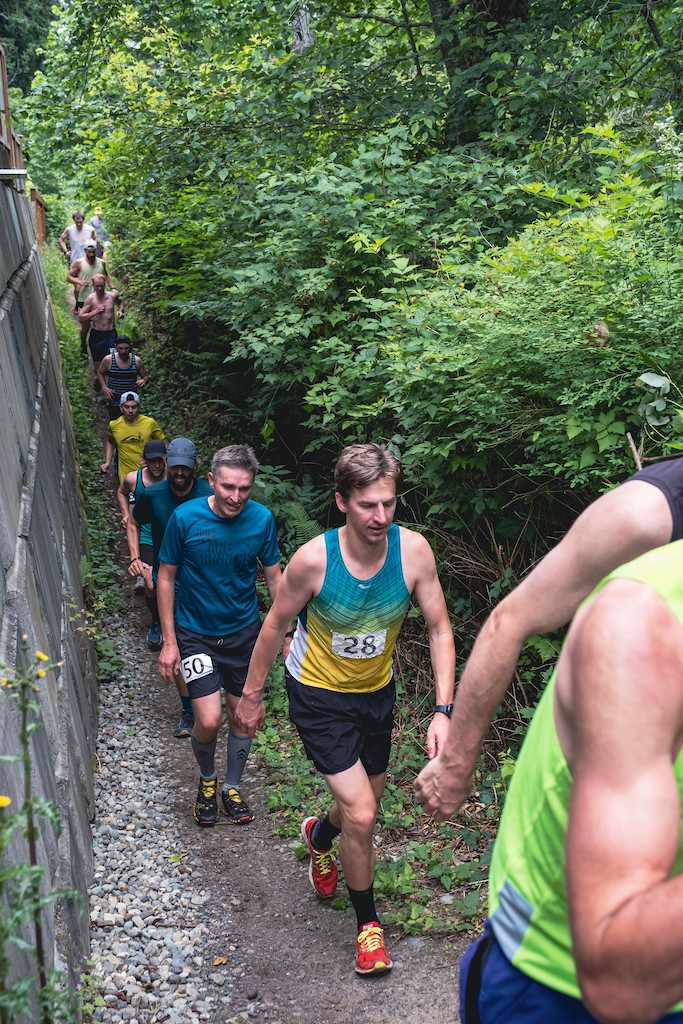 The end of lap 6 marked the half marathon was a marker in my mind at which point we’d start doing some real running. I figured here I’d be in easy run mode, taking in gels rather than solid food and likely in the 150bpm range. My strategy was ‘easy and gels’. 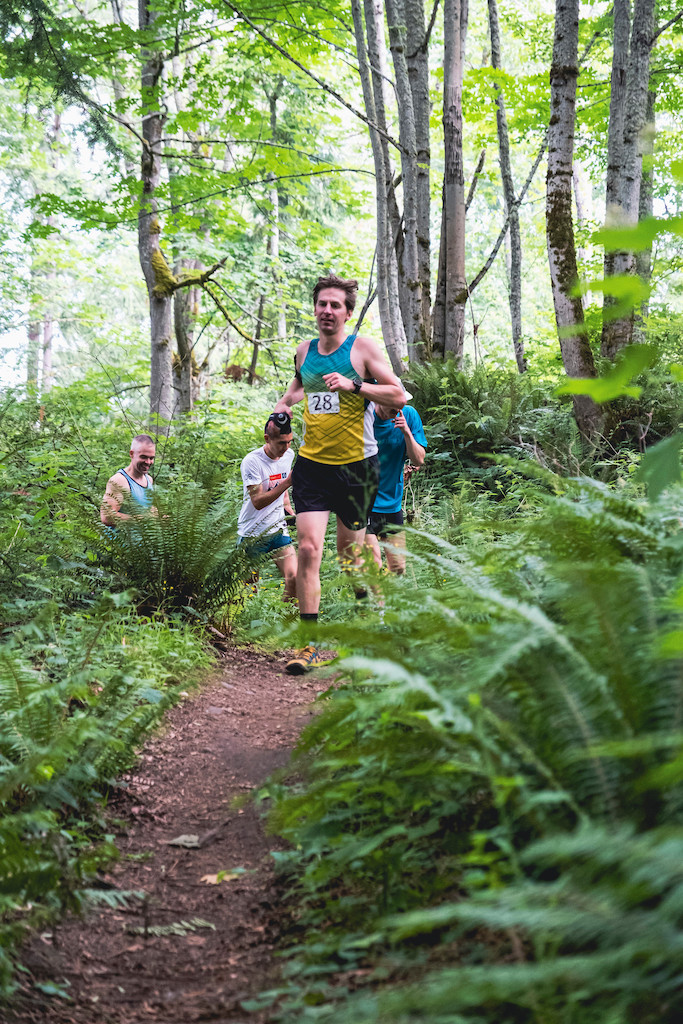 I logged 24:11, 23:59 and 23:21 on lap targets of 26, 25 and 24. That final one was the closest I had come yet to cutoff, finishing with only 40 seconds left. In all honesty, I should have cut all of them that close, I would have saved even more energy that way. I had expected to get close to 155bpm here but logged 144bpm for all of them. I was pretty far under my heart rate expectations, which made me think I would be able to hit the high end of my goal.

Last time I ran this race, lap 10 was where I started feeling it. The crowd starts to thin, the pace gets faster and you start the lap nearly 20 miles in, a point known as ‘the wall’ in marathon circles. 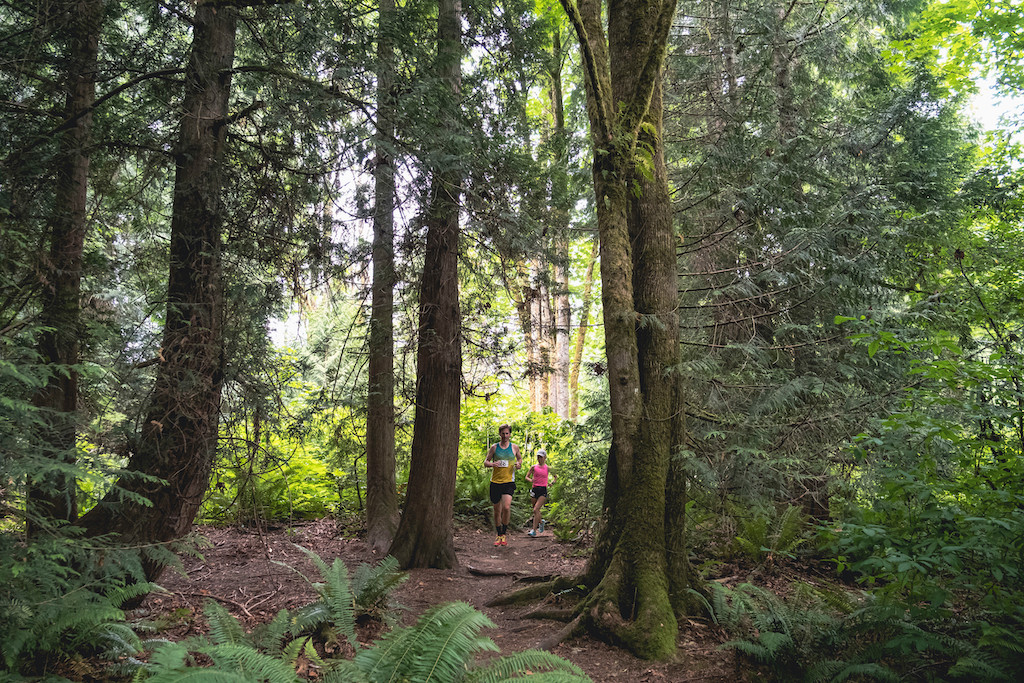 For lap 10-12 my strategy was ‘tempo’. I figured this would be a real workout and I’d have to dig deep to get through these laps. I was surprised how easy lap 10 was, I hit 147bpm and was feeling great, even as others were starting to talk about hurting. Last time I raced this I ran a three laps in the 150s, three in the 160s and then finally crashed. If I were able to do the same here, it seemed like I could hit 16 laps, my stretch goal. This was especially true because after lap 12, the laps started dropping only 30 seconds per lap as opposed to a whole minute.

It was at this point as well that the whole group began running the same direction each lap, alternating clockwise and counterclockwise. Up until lap 10 I had run every lap counterclockwise. I liked the hills better in that direction and saw no reason to alternate. It seems like most people were alternating some as I picked up the Strava Local Legend award for running the lap that way more than anyone else in the last 90 days. 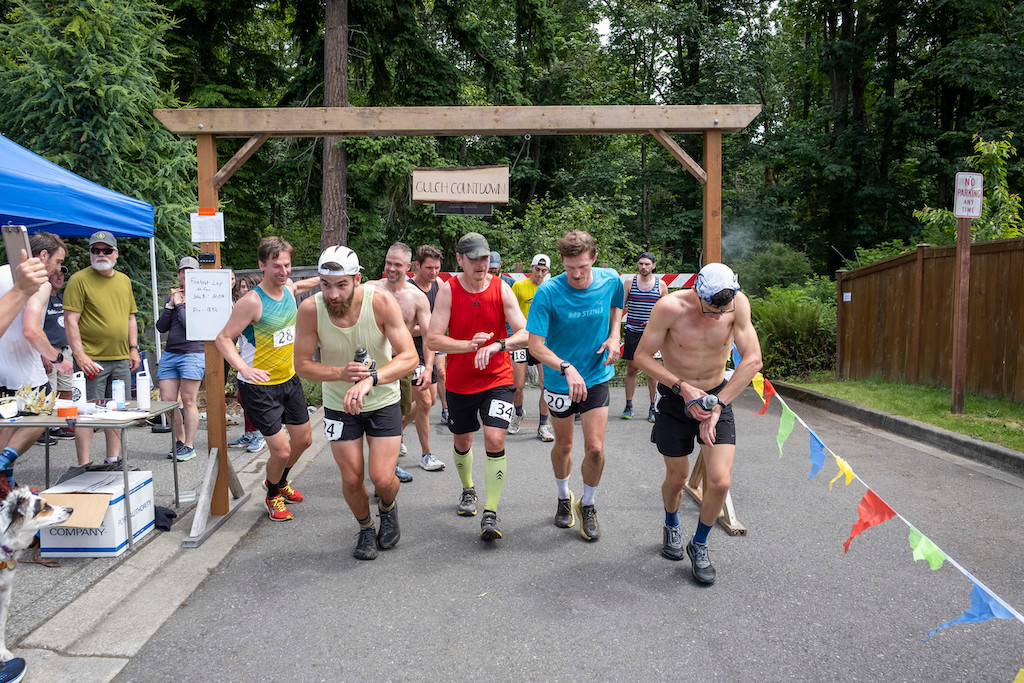 It was now 1pm, starting to get hot and this is where I made a big mistake. At the refill station I put Gatorade in my water bottle. I figured some salts and calories would be good and that was and easy way to do it. I usually never mix hydration and fuel – I drink plain water, eat food and take various pills to manage salts, etc. In this case, I ended up taking a bit too much liquid in and was feeling a bit bloated. I figured I could course correct by just hanging onto the group and letting digestion take place, which would probably put me in a good spot for when the laps got faster.

Lap 12 was a turning point for me. The hiccups certainly didn’t help, but what really surprised me was my heart rate. I finished averaging 161bpm. Remember, up until lap 10 I hadn’t even left the 140s and I figured I’d be good for a few laps in 150s before having to grind it out in the 160s. But just like that, I was in the 160s and realizing my race was probably closer than I had hoped to over. 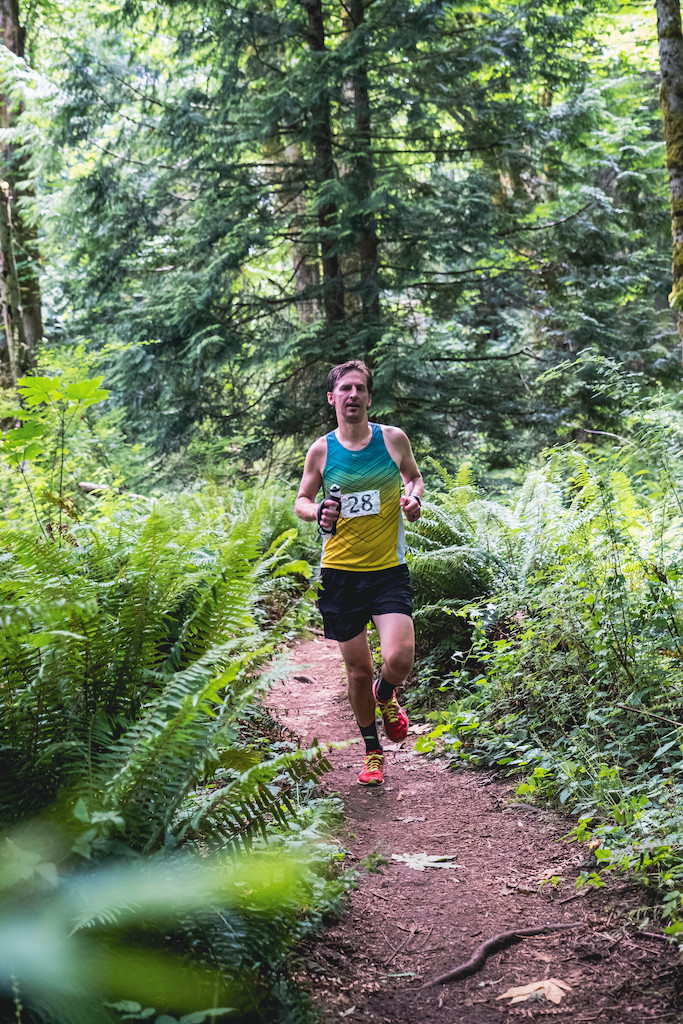 My stretch goal was 16 and at one point in the day, it was seeming like that was achievable. 18 laps even felt possible. By now, I was realizing the end was near. 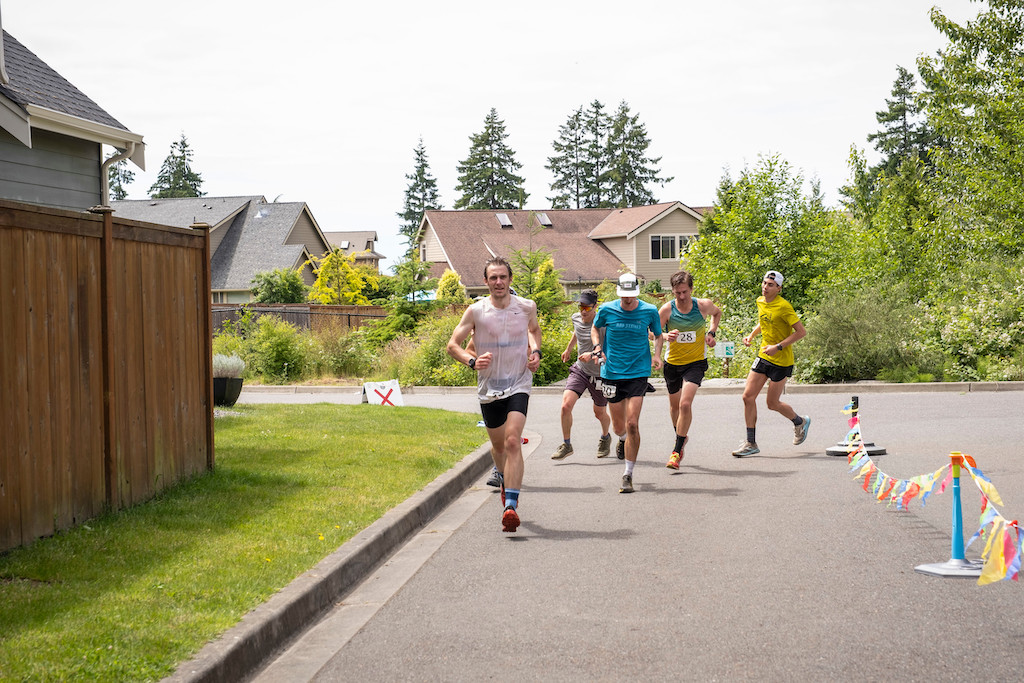 I figured the odd laps, which went counterclockwise would be pretty safe as the way the hills lined up going that direction works well for my running style. I knew the even laps would be what got me though.

I knew lap 14 was going to be tough. I figured I had to give it everything I had and that if I made it, even if I just barely finished in time, I could probably keep it rolling into lap 15 and have a chance to recover on the flats before digging deep for the big hill at the finish.

My (Did Not) Finish

The clockwise lap has a big hill you run down and up, then a slow steady hill you grind up, followed by a false flat downhill to the finish. What that ends up meaning is you will cross the half way point behind pace and need to make it up on the steady uphill, but you’ll think you can still make it up on the flat. It is much harder for me to run and skimming through the results, it looks like of the final 20 racers, 15 were eliminated going that direction, while only 5 going the other direction, so it seems like it is harder for everyone.

I made the same mistake I did last time where I tried to save something in the tank, ended up on my own behind some runners that also wouldn’t finish, eventually realized I would have to run 5 minute pace to finish in time and then just gave up. I should have held onto the top runners at all costs.

As I heard the whistles blowing and realized there was no way I could finish in time, I resolved to jogging it into the finish. 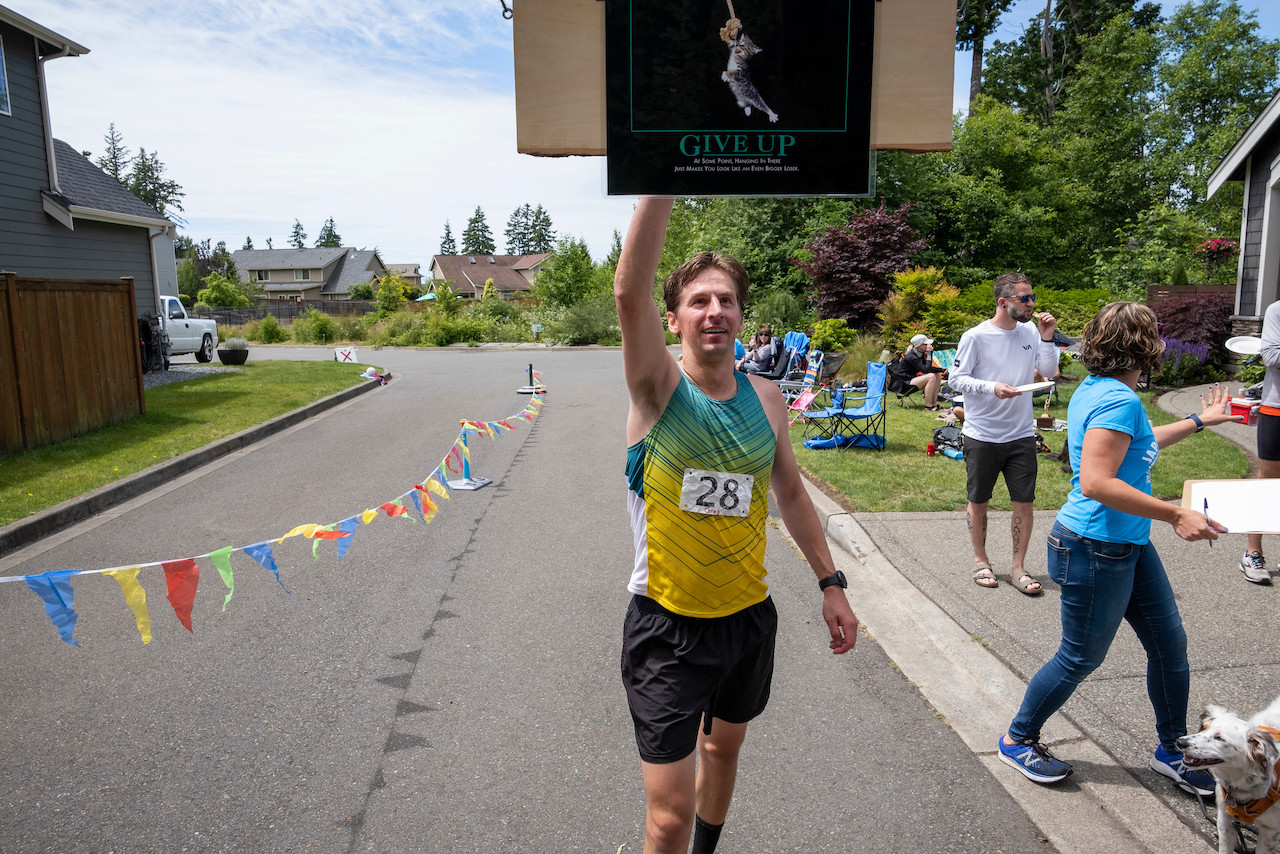 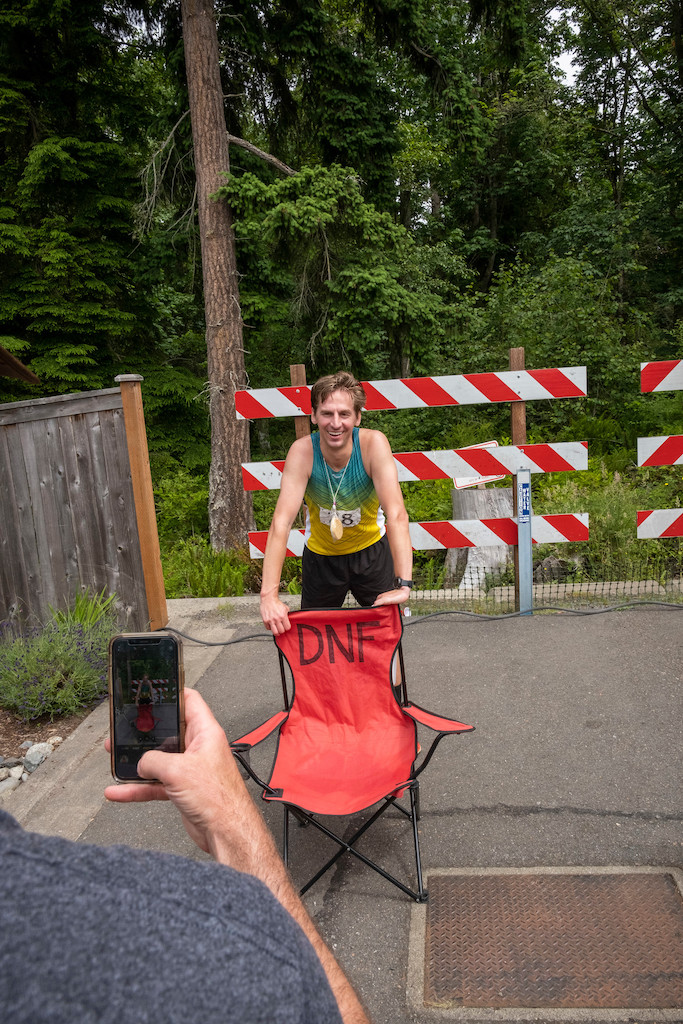 I was in rough shape. I could barely walk on account of a huge blood blister on my big toe and I ended up losing 4 toenails from that race. I guess using my flats on a trail course wasn’t the best idea. 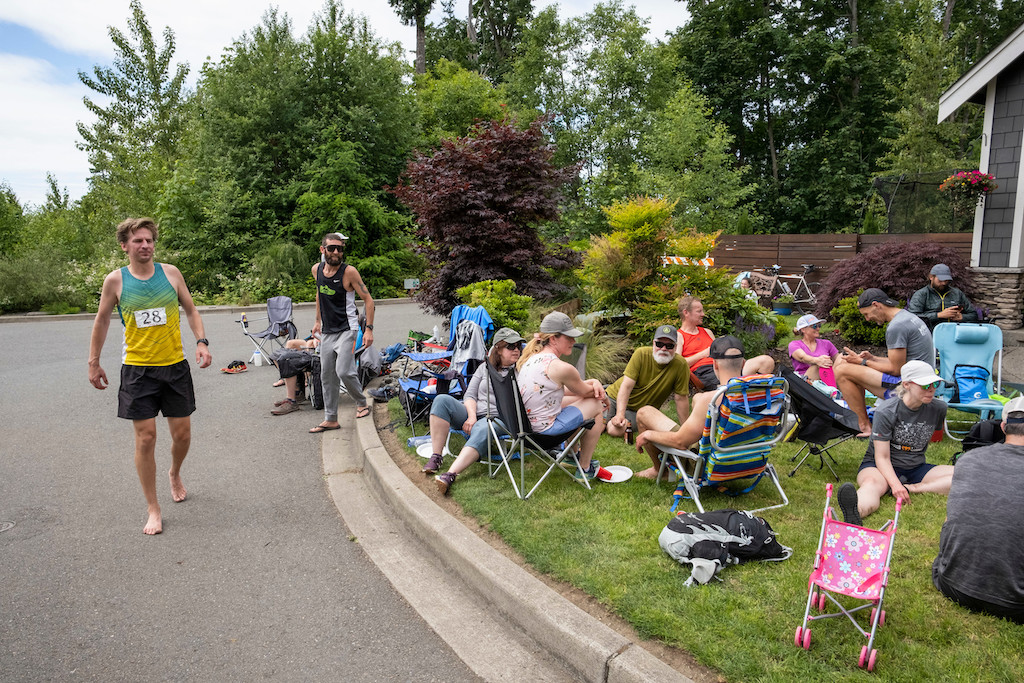 Thankfully our host is a nurse and had supplies handy to bleed out the blister and set my on my way. 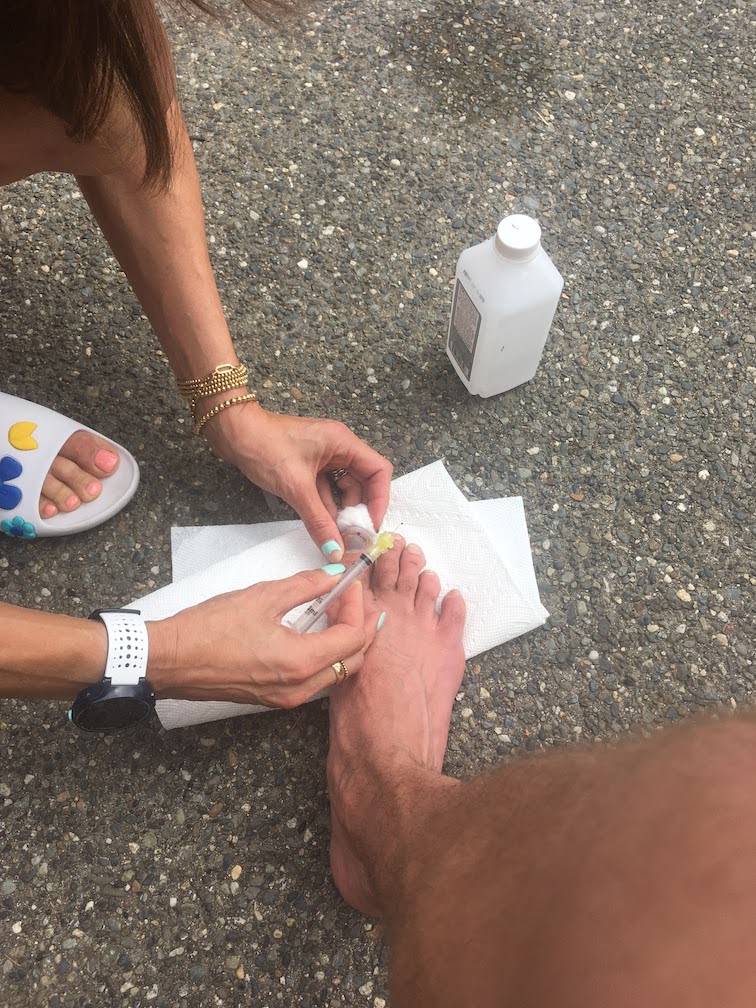 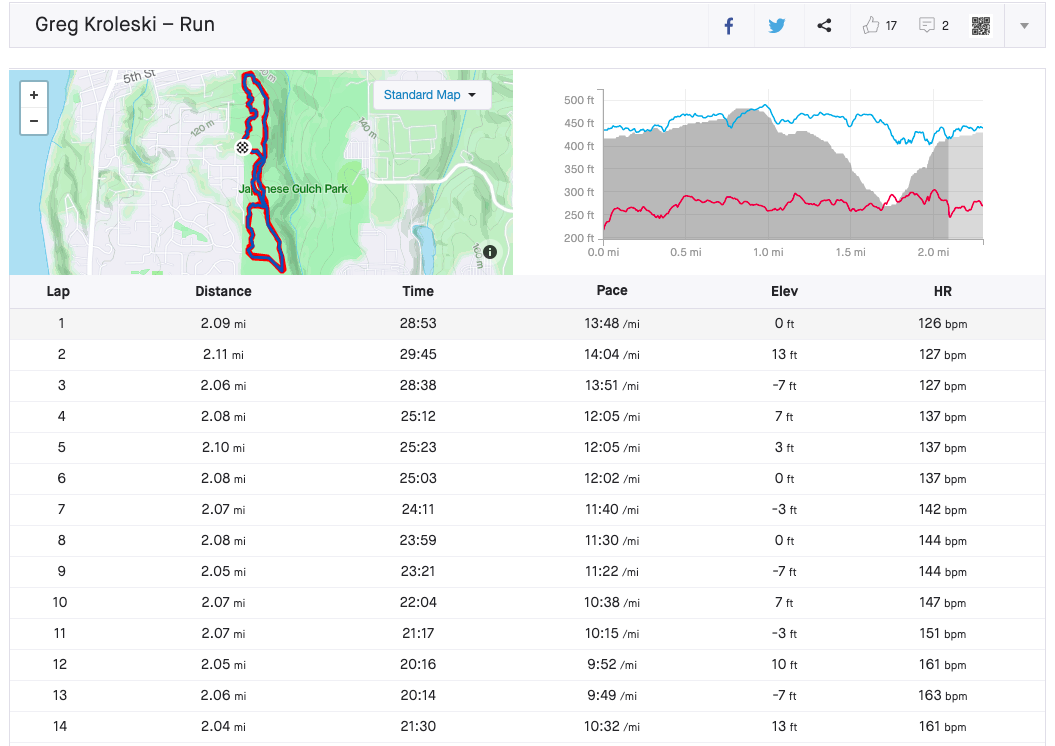 I’ll be back to do this race again if they host it another time. It is a great event, regardless of what shape you’re in, since everyone gets to run together early on. 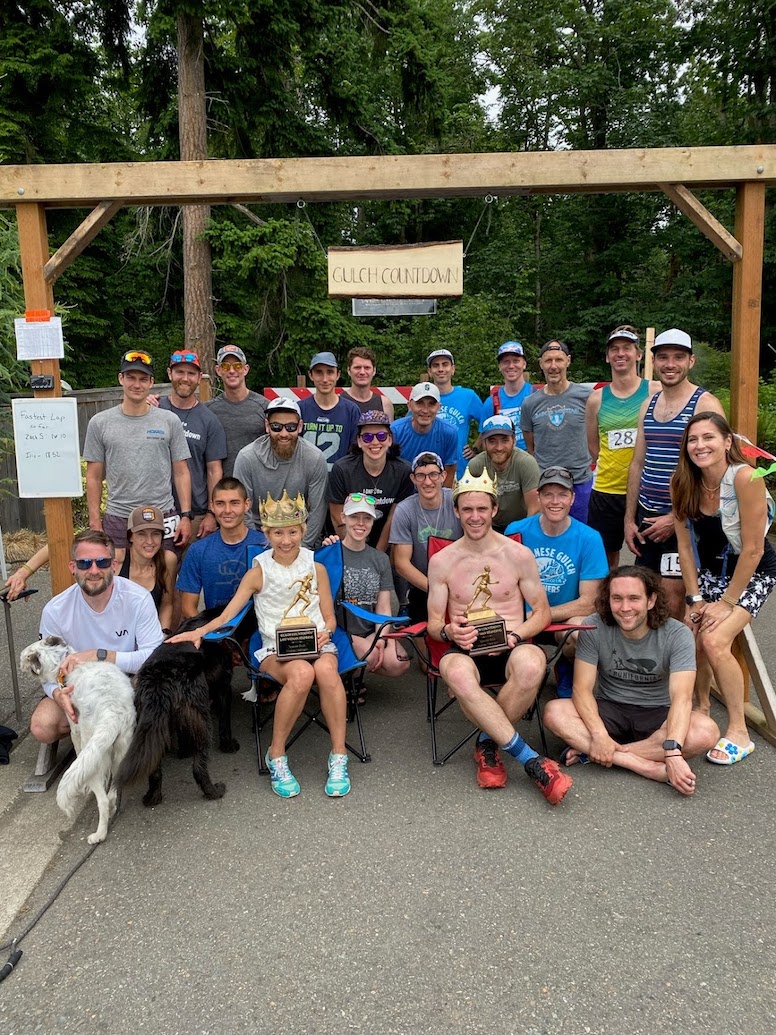 I feel a bit nervous about my goal of a 24 hour ultra after having run this. To hit that result I’d need to average what equates to 26 minute laps on this course. That would put my heart rate in the 130s range, which feels a bit high to hold for 24 hours. Sometimes heart rates slow down for the easy stuff with fatigue though, so perhaps the pace that gets me 130s fresh will actually get 120s tired as my body works to conserve energy. 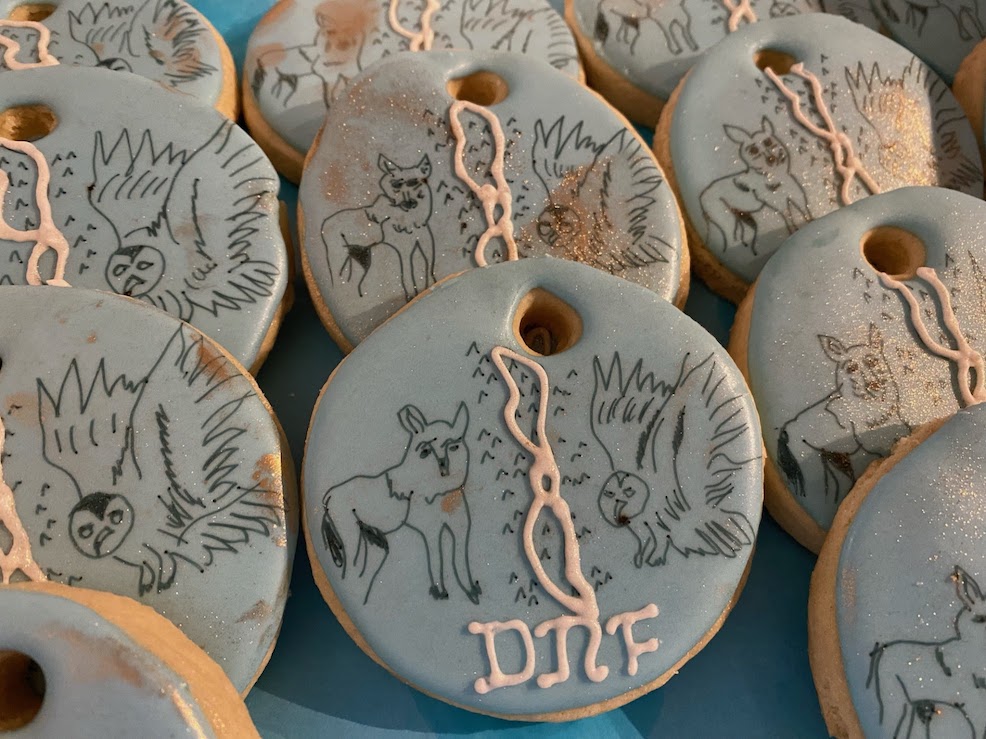