I detailed my 2019 focus here (read that first if you want more context). Here is how I’m progressing.

It occurs to me that the nature of suffering is deeply related to how much one cares about the task. One hundred miles walked for a purpose can feel shorter than a single aimless mile.

I’ve done some reading on wilderness fasting and vision quests. The concept seems shared by many seemingly divergent walks of life but it generally includes some common elements; alone, undistracted, hungry and unprotected.

I’ve secured backcountry permits for two different mid-week excursions this summer and will pick one based on how the weather and my schedule shakes out.

This quarter was a bit of a regression, despite the bar being raised. I decreased my weekly target from 3 hours to 2 hours. Despite that my average went from 137 minutes per week up to 180. This was mostly due to three particularly screen-timey weeks – I did manage to stay under the threshold in 9 out of 12 weeks, but those three really pushed it over.

Of the three weeks that racked up a lot of minutes – one was a trip in which I watched a number of things with the people I was visiting and a whole lot on the plane ride back. I should have slept on that plane ride, which would have minimized the impact. The other week was a bit of an outlier, the newest Avengers movie came out and not wanting the surprises spoiled, I saw it on opening weekend. That movie by itself was over my weekly target but I also watched Captain Marvel, the previous movie in the series the night before in order to catch up. The third big outlier week was one in which I had the flu and was out of commission for ~10 days. I’m actually surprised I kept my total as low as I did during that time, usually sick time results in a lot of screen time but I tried to sleep and read more this time. 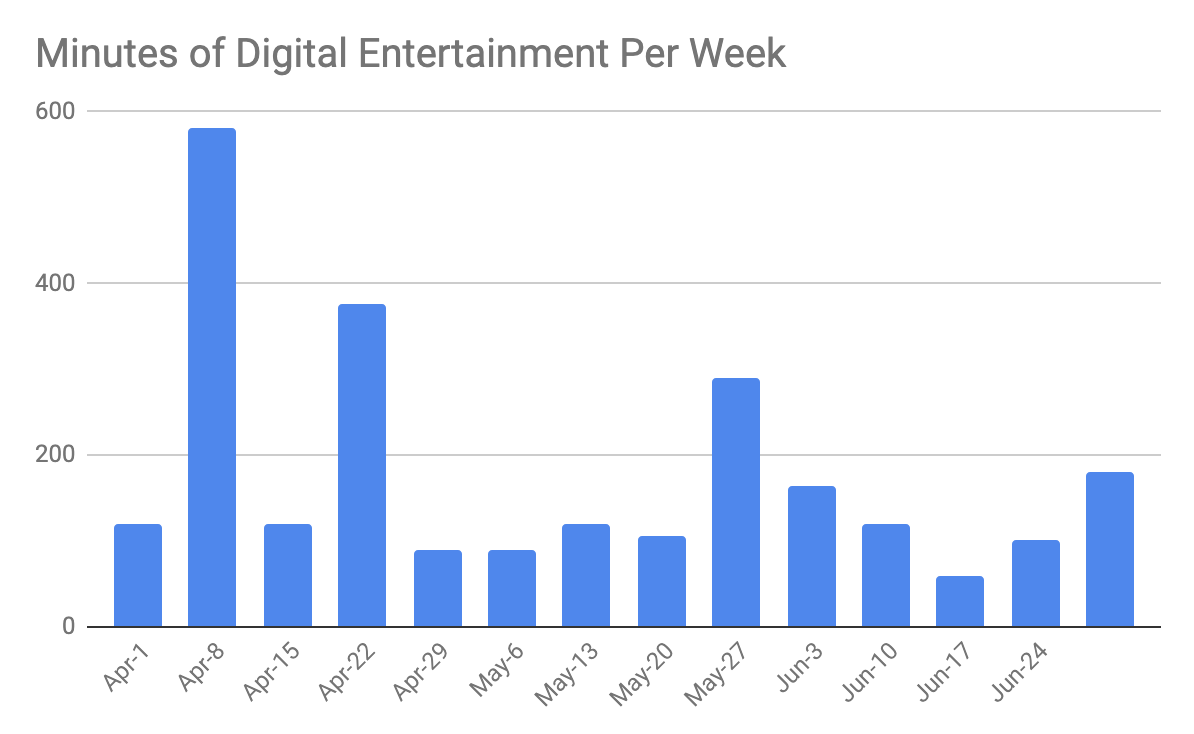 Reading, boardgames & LEGO have continued to be my favorite non-digital entertainment. I’ve read 4.5 books this year, played 46 boardgames & sorted through a few thousand pieces in order to re-assemble sets for my kids to play with (I’ve built a few of them myself as well).

I recently finished Mandela’s biography and watched the movie based on it. I still need to complete my exemplar review but feel hesitant to do it without first reading a biography of him. I found his autobiography was so humble and un-antagonistic that it forced me to read between the lines to get towards the truth. I’d love to hear the thoughts of a historian that is willing to boast on Mandela’s behalf when necessary and condemn his flaws with equal strength.

I’ve been getting a bit nervous lately. This is a really big run, I’m not at all prepared for it and the dates are getting closer.

I started thinking back to a 20 mile hike I did last year that wore me out pretty good. I’m pretty confident I could do double that much, but I have no idea how I’ll do 5x that much. I’m going to need to go to a place of exhaustion I’ve never been before.

I’ve broken in the shoes I’m going to wear and collected the gear I’ll need so I could start to do some training runs with the actual weight I’ll be carrying for the run. I’ve also done enough research that I feel like I’m not just winging it – which is probably best when trying to run 93 miles in the wilderness, alone, without sleeping.

At this point I am fairly confident that there is a 0% chance this will be an uneventful run. It should make for a good run report at the least.