With the start of a new year, I take the time to set my focus for the coming year. I believe that by focusing on fewer goals, I can achieve results that are exponentially greater than the sum of the results from doing many things.

I detailed my 2017 focus here (read that first if you want more context) & did a quarter year update as well. Here is how I’m progressing.

My sabbath year will be launching on July 13th, 2017. After about five years of considering, exploring and planning, we are finally here.

I recently wrote about our general sabbath year principles along with specific plans we have for this year’s iteration. With those completed and the launch forthcoming, it looks as if this challenge will be completed shortly.

When I picked seven hours as the goal, it seemed achievable yet difficult. I did it based on a bit of data I had from previous years that I collected during an unrelated tracking experiment. During the first quarter I achieved about a 50% success rate, which suggested to me that the target was pretty good – possible but hard enough I had to work for it.

The second quarter has been a different story. I’ve been successful 100% of weeks and my average is actually over 10 hours – with the progression showing a steady climb up to 15 hours during the last week of the quarter. 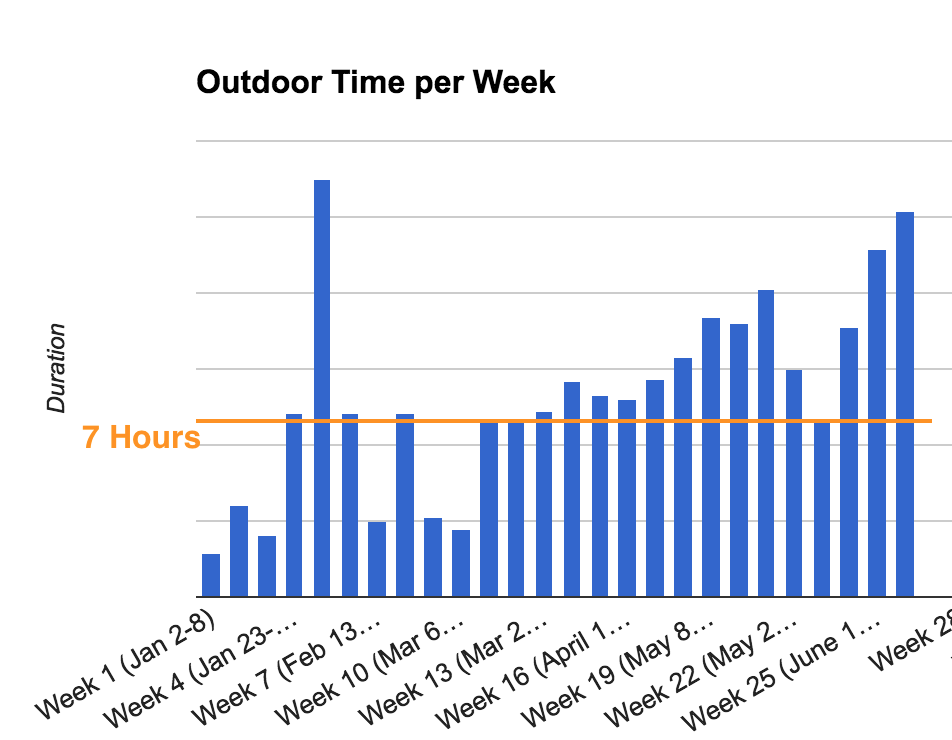 What changed? It turns out, it is in fact a lot easier to be outside when it is warm, light and dry than when it is cold, dark and wet.

In the second quarter, the daytime temperature hasn’t dropped below 50*. The days have stayed in the 50s and 60s – more recently climbing into the 70s and even the 80s a few times. So far, as it has gotten warmer, the amount of time I’ve spent outside has increased. It only got so warm that it was hard to be outside once, when it hit the 90s and even then we just stayed in the shade. I defend that 70* is the perfect temperature and 50-90* is the ideal range to be in 95% of the time.

Along with the weather changing, the days have gotten longer. To give you an idea about how dramatic the difference in light is – look at this chart showing the type of light. In the summer in Seattle there are only about 1-2 hours of real night level darkness where as in the winter it is above 10. That makes a huge difference in the number of activities it is possible to easily do outside after work.

In fact, due to all of those changes, it is so easy to go outside that it is getting harder to tack our outdoor time. It used to be easy because there were such clear barriers between inside & outside time. We spent 10+ minutes getting ready to go outside between chasing down jackets, hats, gloves, etc. for 2-5 of us. Now we just wander in and out – not having to change layers at all – which makes accounting for time trickier.

Here are some data about Q2.

For activities, the leaders from Q1 remain popular – walks, the park & running. The new addition is hanging out in the yard which is our second most popular activity by frequency – thanks to a slide, trampoline and it being warm enough to get out the water play table. 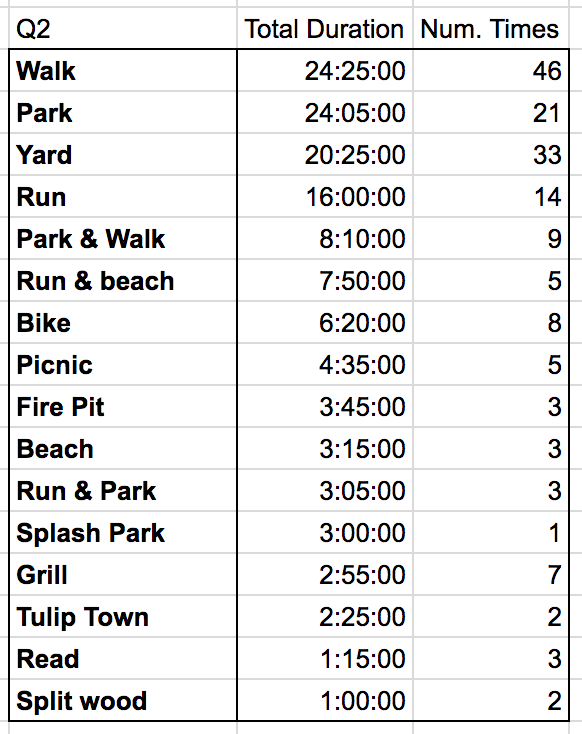 Looking at who I spend outdoor time with – the general trends are the same. I end up doing a lot with my two boys – the two older children. The second most popular is having my wife and daughter join us as well for a full family outing. I did manage to clock time in almost every permutation of family during this quarter, which is cool. 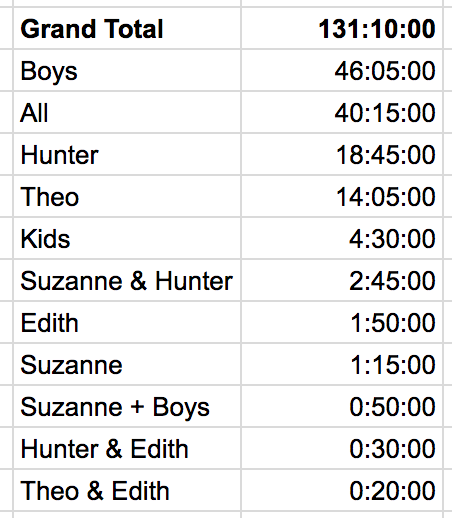 Hunter, my eldest, edged out Theo this quarter for a few reasons – his bedtime is later and it is still light during that time so we often run an errand on the bike or do something in the yard, like splitting wood. He has also only taking afternoon naps 50% of the time, which means there is often a mid day opportunity to do something. I do want to keep an eye on the balance though – an unintended learning from this data set.

Finally, here is a collage that includes pictures of a few of my favorite outdoor activities from Q2: hanging out in the yard, various beaches around Seattle, Tulip Town, local parks and bike rides

I am about to finish the biography about Liddell that came out recently – For the Glory. I want picking an exemplar to involve more than just reading a biography every year though so I have a few more things planned for the second half of the year.

First I plan to read the one book he wrote – a devotional study. It’s creation is mentioned in the biography and one of his close friends and co-workers notes that his character is well reflected by the writing. That should be a good way to get to know more about what made him click.

Finally, I happen to be going to Paris later this year, the place Liddell won his Gold Medal in the 400 meters during the 1924 Olympics. I’m going to see if I can get on the actual track and log a lap to compare splits. That seems like an apt way to walk a quarter mile in his shoes.

I really wish going to China was an option to see the area around Xiaozhang (the rural area he worked in for a number of years) & Weihsien (the internment camp he eventually died in), but that likely isn’t possible in the near term.