I detailed my 2019 focus here (read that first if you want more context). I’ve posted a few updates throughout the year (quarter year, half year & three quarters) and now is the time to do a final review.

2019 was my best year ever for executing a yearly focus. Part of this is certainly due to everything I have learned from having mixed results in the past. I kept my challenge, habit, exemplar and bucket list item all tightly nested with a topic that I was getting plenty of time to think about from everyday life anyhow. That resulted in a nice synergy – never before would I have thought I would use Nelson Mandela as motivation to help me press forward while running around a volcano by myself at 4am, but here we are.

In December I went out in the wilderness of Joshua Tree National Park and fasted for 48 hours. I wrote some thoughts on that experience here. Funny enough, the picture that I decided to use last January is from Joshua Tree, even though I originally had planned to do this closer to Seattle.

I am only giving myself 8/10 for two reasons. First, my total fasting time was exactly 48 hours and wilderness time was ~42. That was the bare minimum of what I had hoped to accomplish. My leaving was mostly due to scheduling issues and not inability to continue so I don’t feel like I got as close to my max as perhaps I wanted. The second reason, which likely resulted from that first, is I didn’t get quite into the headspace that I wanted to. I’m not sure if it just takes me longer to get there now because I have more in my head or if I’m unwilling to go there, but I don’t feel like I quite did it.

I ended up averaging 1.98 hours per week of digital entertainment, just slightly under my goal of 2 hours. I stayed under my target amount (which varied by quarter) on 37 of the 52 weeks.

I had been making great progress into the summer but saw a bit of a regression this winter. Some of that is expected seasonal patterns. I had originally hoped to maintain my low summer levels of digital entertainment as winter set in, but ended up relaxing my target a bit as reality kicked in. Even with that, I can tell I regressed a little more towards the end of the year. I had a plane ride where I watched shows I didn’t even care about and I signed up for Disney+ which got me hooked on one show I hadn’t planned on (The Mandalorian).

Here are the results from Q4. In the beginning of 2019 I had planned on having Q4 have a 2 hour per week target, but after a successful summer I decided to shoot for one hour. After the first few weeks, I decided two revert to the original 2 hour plan – mainly due to the reality of long, dark, cold days (and Baby Yoda). 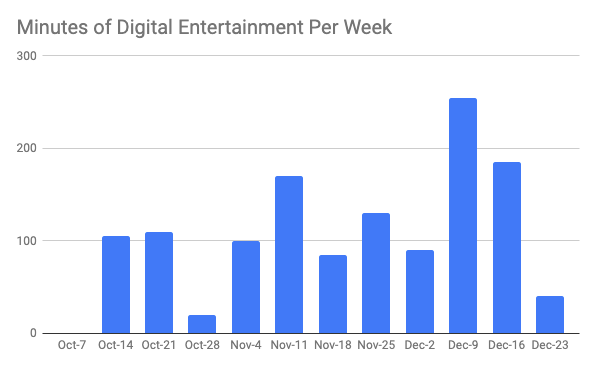 Here is the full year’s worth of data, including the average line, which finished at just under two hours. 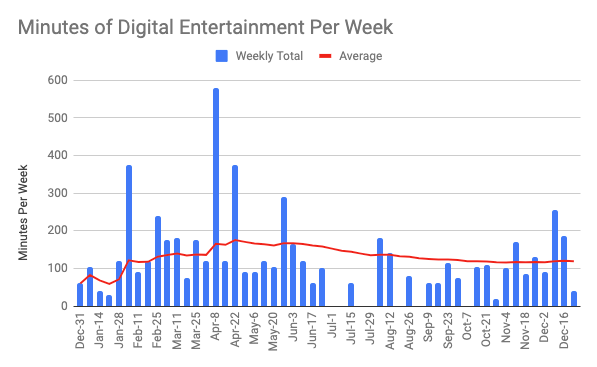 Related to this, in 2018 I had tracked a secret goal that I wrote about before and after to reduce the ratio of consumptive vs productive entertainment activities.

So this is forward progress.

Interestingly, the consumptive number was actually down a lot from the previous years, and I read more books than either of those years. The thing that hurt me was not writing as many blog posts. If I had written three more blog posts, my ratio would have dropped to under 1:2. I think that means my weighting is a bit off as I can usually write a blog post in a night or two where as reading a book often takes me a few weeks to get through.

This year I learned a good bit about Mandela and in July I published my exemplar review for him.

One of the things I learned from him was the ability to remain engaged in a debate but to let time, rather than talking, win it.

I’ve gotten a chance to put this into practice a few times at work. One recent & unannounced project is near to my area of expertise and it was originally heading in a direction that would have resulted in a lot of extra work for my team and frustration for customers. I didn’t own this decision and due to the number of things on my plate, wasn’t able to devote a major portion of my time to it to help steer it.

Instead I was clear about my top concerns and a better solution. I periodically communicated that 1:1 to the right people, even when it seemed like the critical mass of people involved were spinning a bit. The end result (so far, we’ll see for sure when it finally goes live) is essentially what I was pushing for. Getting there took much less of my effort than being deeply engaged would have though, which was the big win.

Despite encounters with a mountain lion, two bears and a sprained ankle, I managed to complete the ~93 mile run, self-supported in under 48 hours. It wasn’t pretty, but it counts. Read the adventure report here.

As a bonus bucket list item, also appropriate to the long-suffering theme, I rode my bike around Mt. Rainier. The one day 150 mile ride, called RAMROD was something I’d had my eye on for a while and when a few coworkers signed up, I decided to join them. Read the ride report here.