Every October, some Google employees host a walking competition called Walktober. The idea is to set a walking goal and see if you can hit it. It predates me by a decade and as of 2021, over twenty-five thousand Googlers participate. In 2020 I helped create a new category of competition for most steps in a day by walking and running for 24 hours straight. I set a record but later in the month, someone broke it and raised the bar. In 2021 I returned to try and break the record again.

What am I proud of from adventure day?

What areas could I improve for future adventures?

I trained more for this years event than last year. I had been training for the Cascade Crest 100 miler this summer which I ended up dropping out of, but still had a lot of my fitness. My training peaked in early October with two 150 mile weeks (combination of walking and running) at which point I tapered for the event.

I had done a few dedicated days at my fast step cadence, one hour on a track and another four hour day on the track. The trick was to go slow but keep my feet moving fast, which felt incredibly awkward but conserved energy. 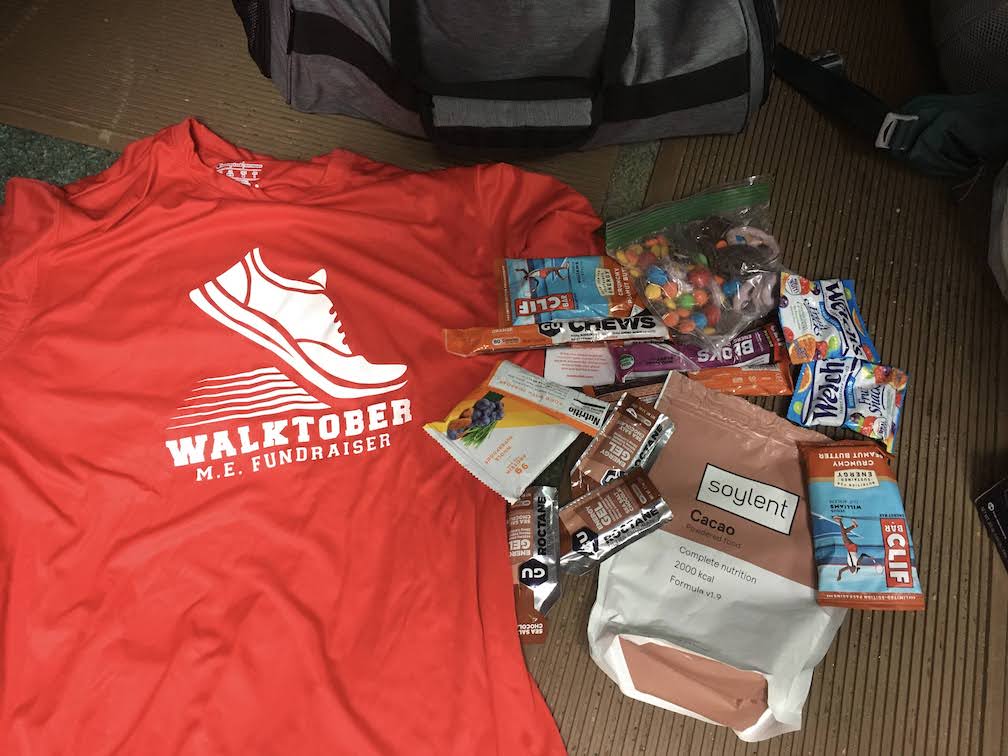 Below is the live feed of updates I posted during my run. Usually I have to write a recap after an event but the nice thing about an event where I’m mostly walking and have cell service, is that I can provide updates in real time.

Oct 29th 8pm – one of the harder parts of this challenge is the midnight start time. You basically end up awake for a full day before you even start the 24 hour run. Going to see if I can nap a bit now.

Oct 29th 11:45pm – suited up and ready to go. At about this point in a challenge I always find myself asking ‘why do I always sign up for this sort of thing?’. But then I smile and remember I love it. 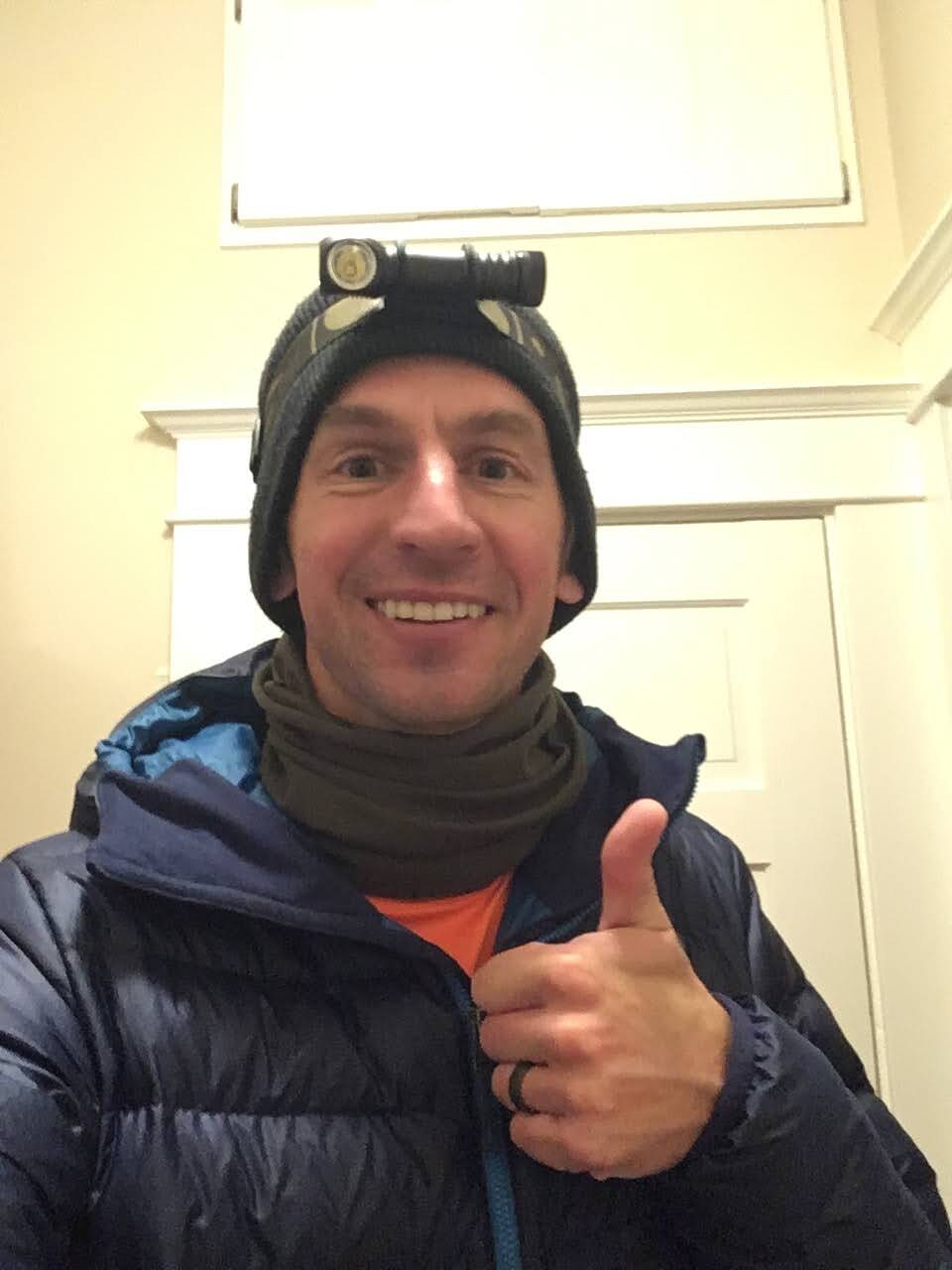 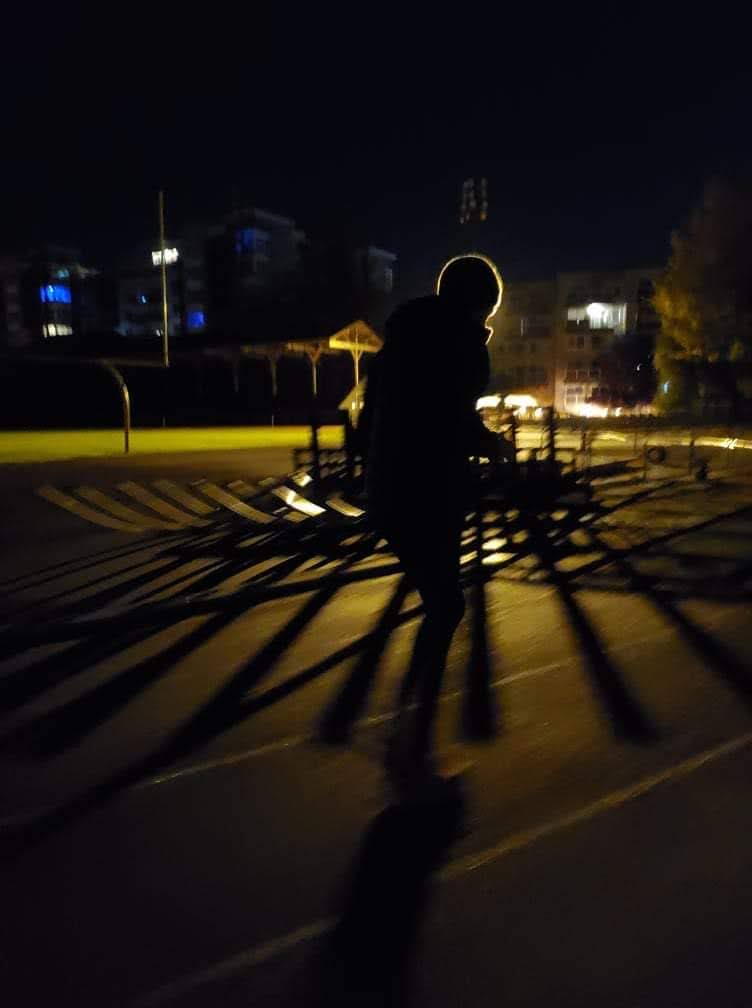 Abram joined me for some pre-sunrise hours and helped set up my aid station table. 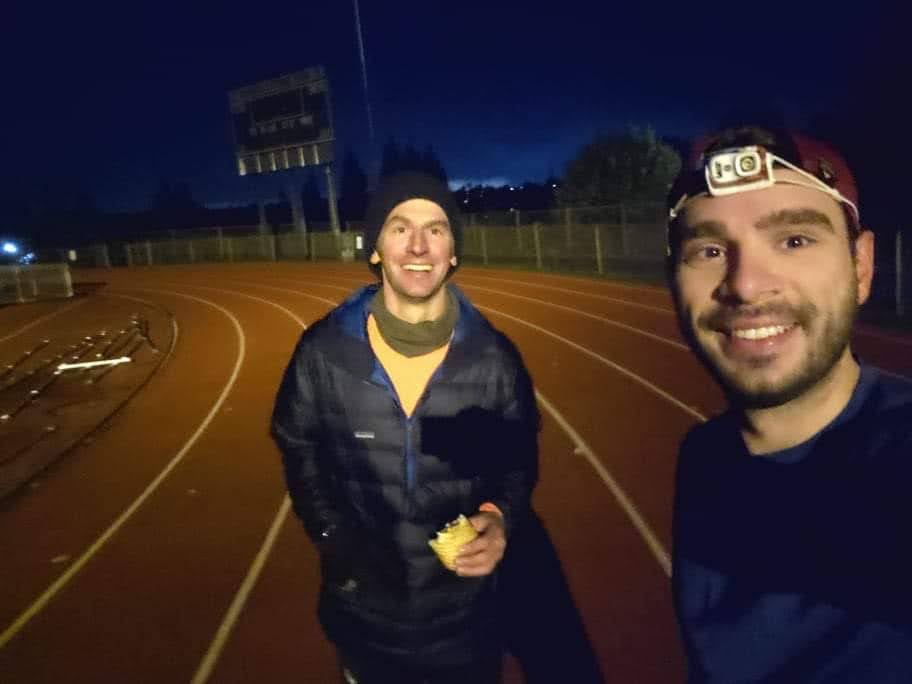 6am -60k lost some time to setup the aid station, but excited to have this every 1/4 mile for the day 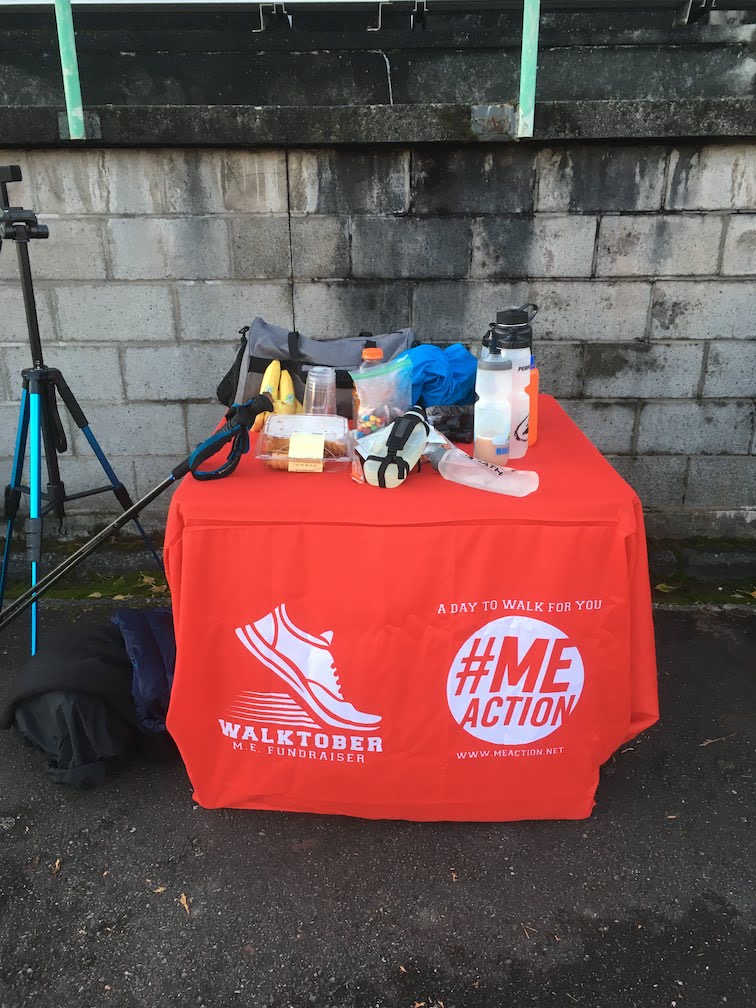 8am -76k had some knee issues but took a few ibuprofen to see if I can shake it off. Sun is up and the coldest hours are behind me! 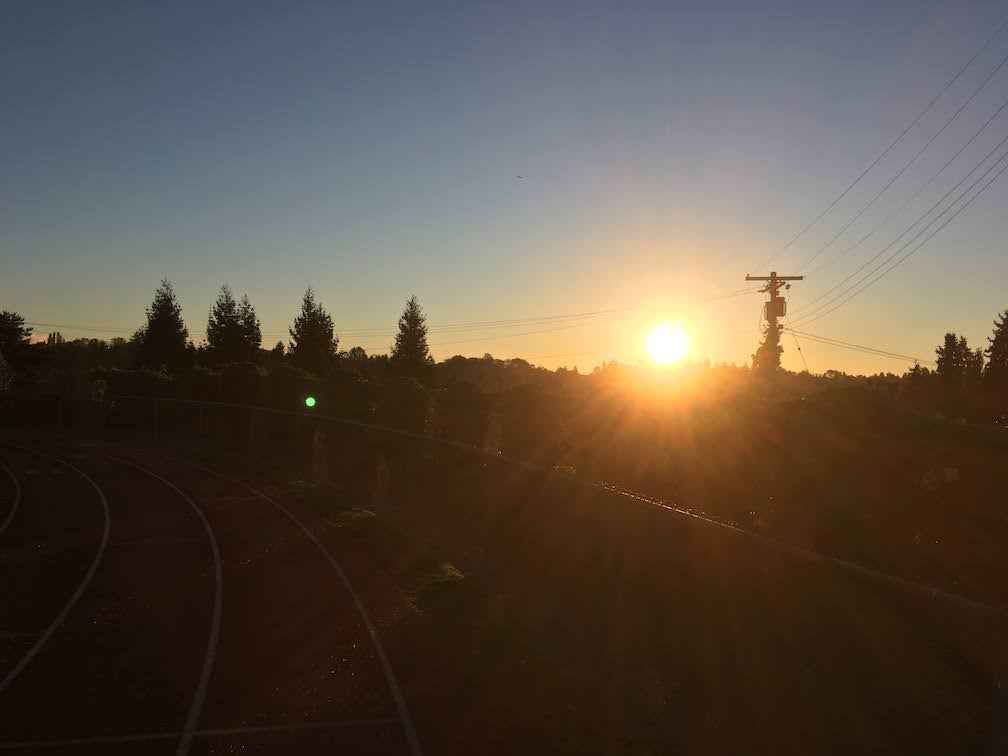 Mt. Rainier watching from the distance 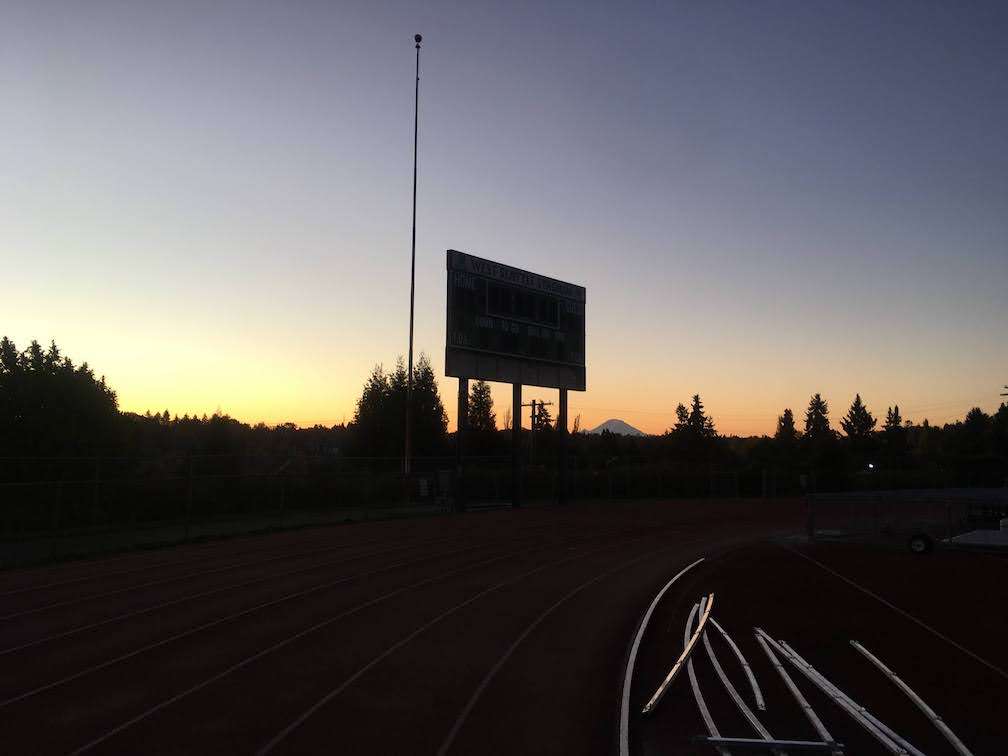 Brian got me back on track, like he always does 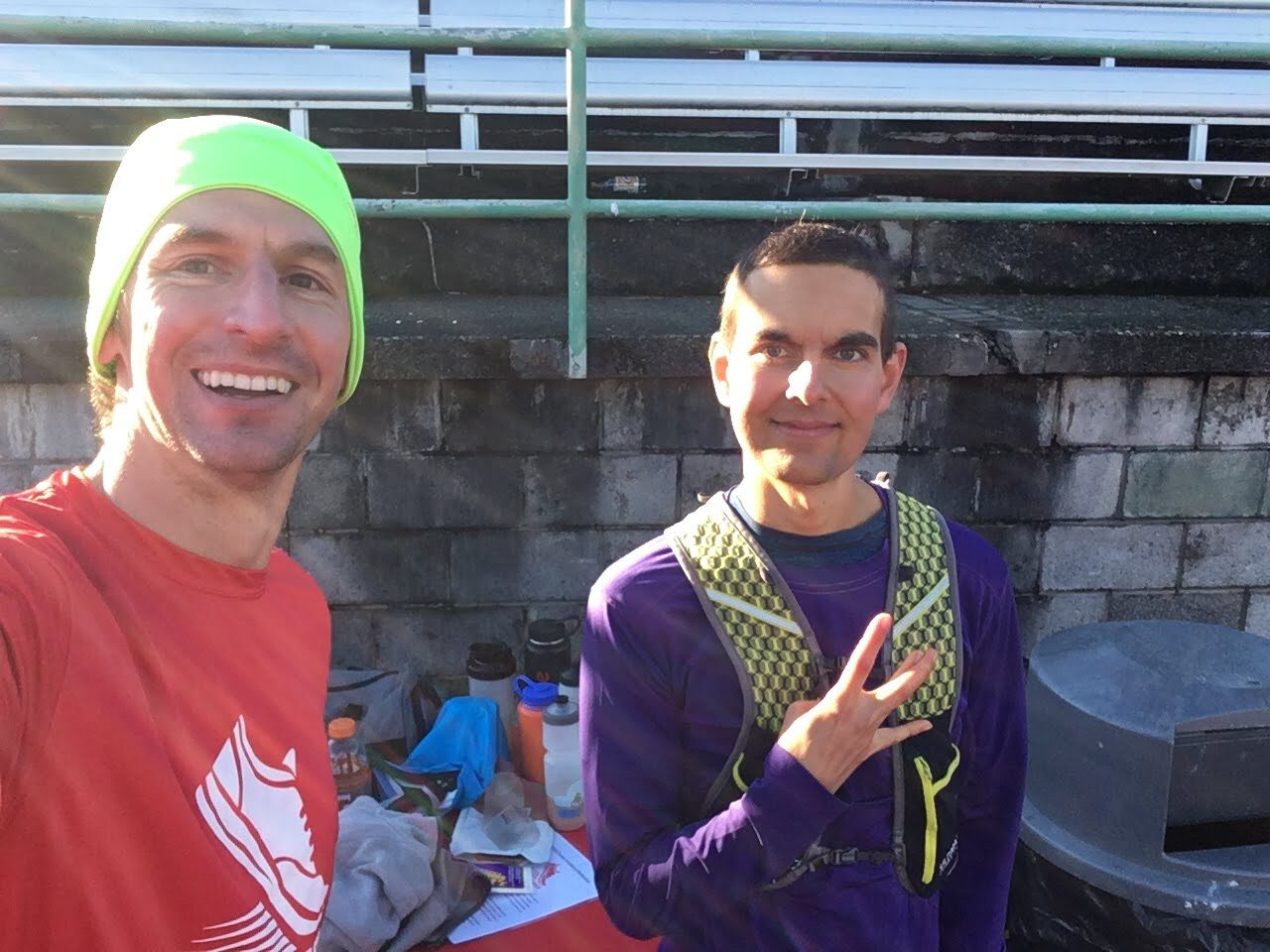 A big group of Googlers I didn’t yet know just showed up to pace me for a few laps and refill my cider supply. Thanks for coming out 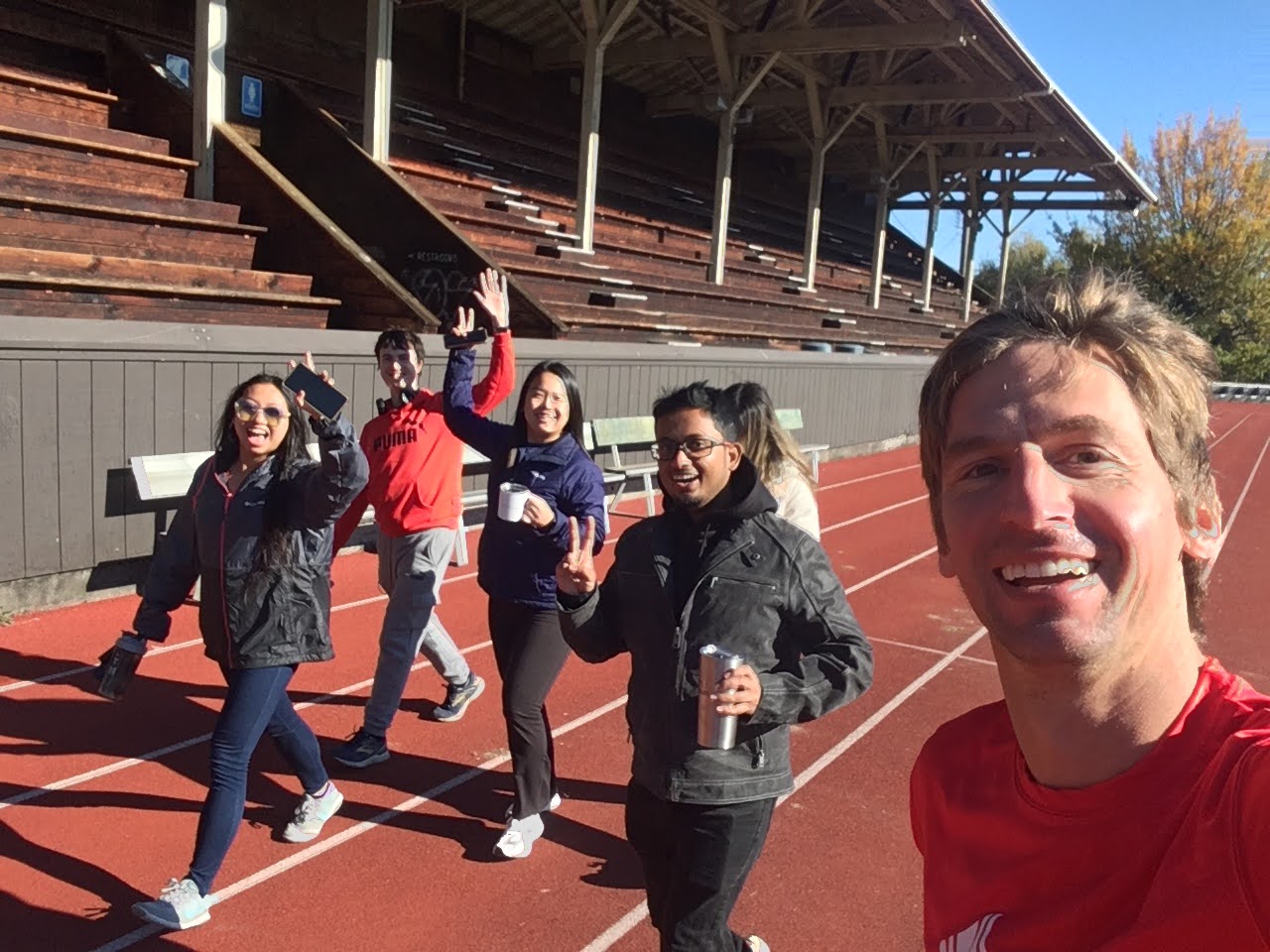 Yiwei from my team was here too 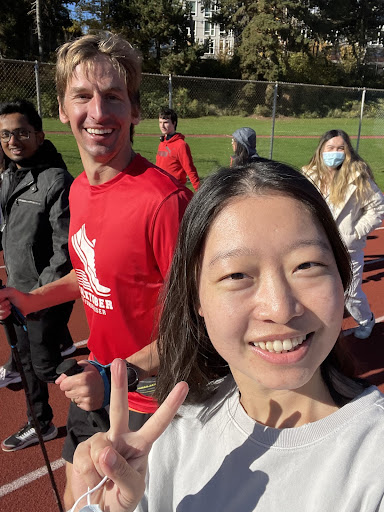 12:30pm – Jennifer swung by with sweet potato fries, bananas, gatorade, and a jug of water 🙂 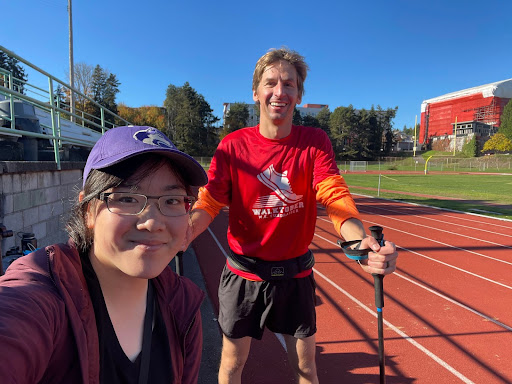 Full belly and lots of sun, but I’m feeling it now.

My Garmin app let me know I’m moving more than on a typical Saturday. That is some machine intelligence right there 😉

Great to meet the Christen family, who heard about the event and decided to drive over to say hi. 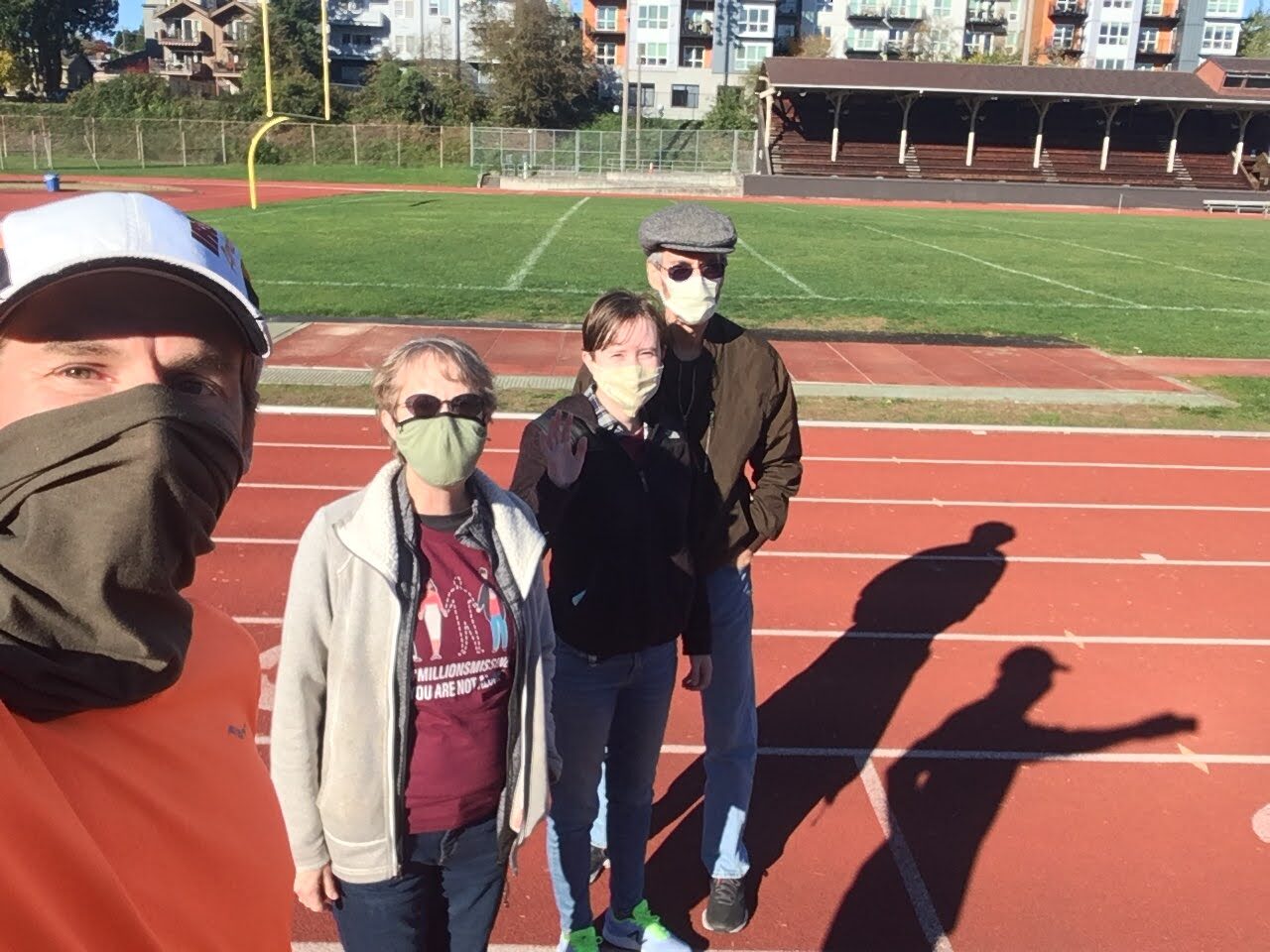 Up until I broke the record last year, the most a Googler had walked in a day during Walktober (that we can find) was 135k steps. I just crossed that mark and have 9 hours left in the day. 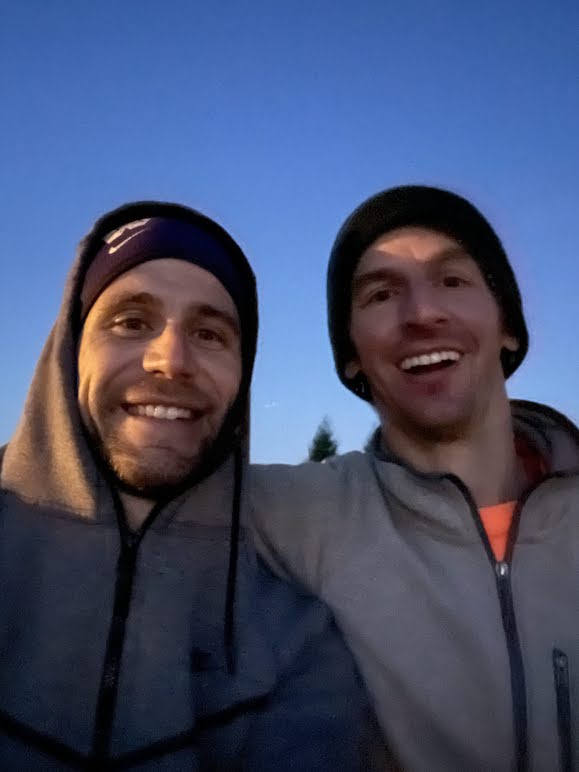 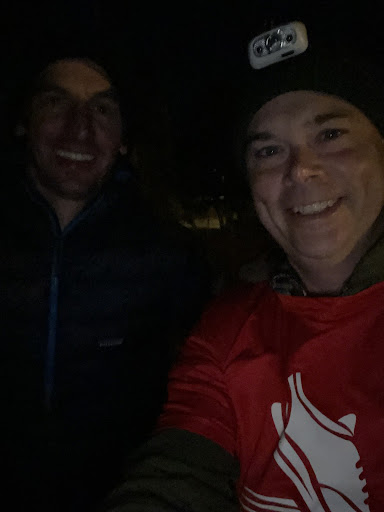 8pm 174k and some change. Things are barely hanging together. Had the hiccups for an hour and some stomach issues but still in pace to get the record, so pushing through it. John is getting me some Pepto Bismol 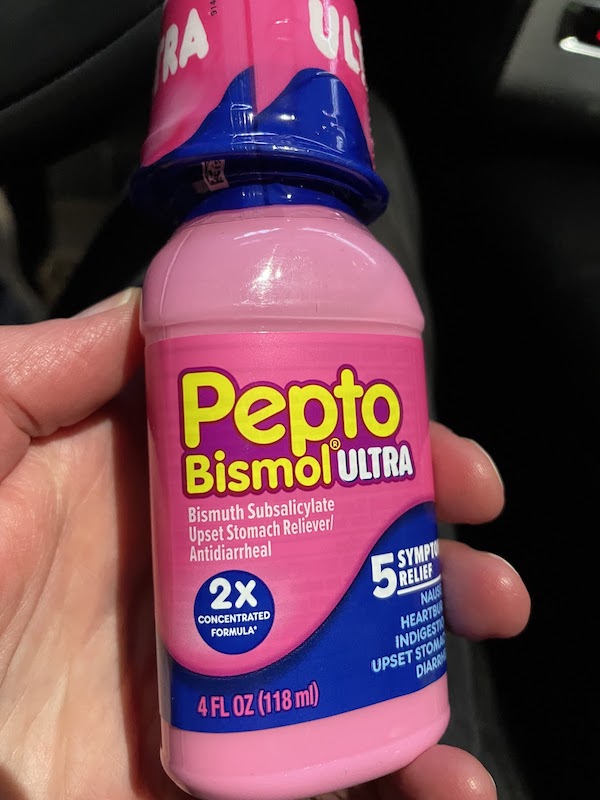 9:50 crossed 187k which was my best last year, so this is a new personal record for me 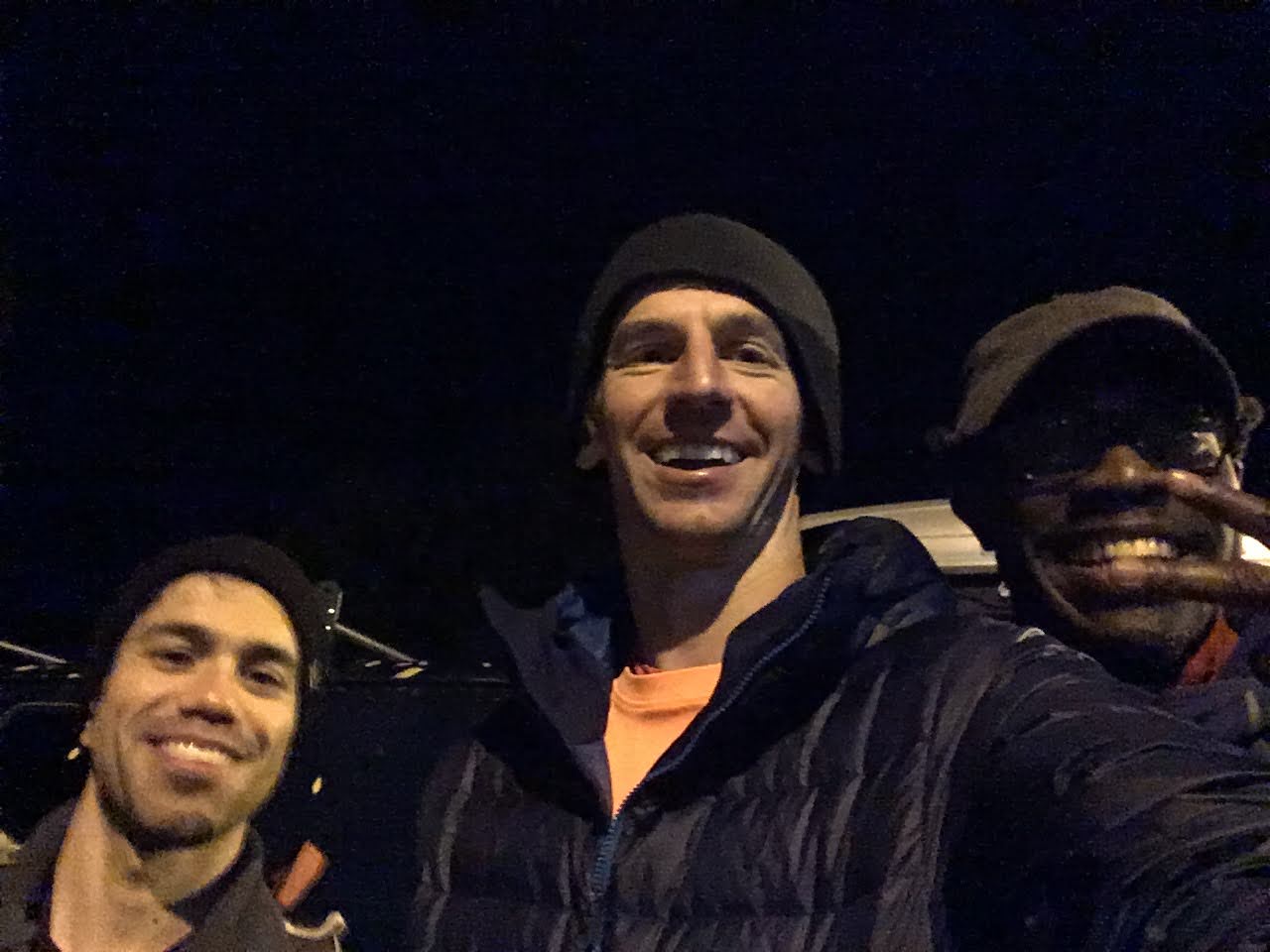 Thank you Armando for coming out for the last 3 hours and Kwaku for joining for the last hour and cleanup. (Big congrats to Kwaku too who is on my Walktober team and also got his highest step day for thee month yesterday)

That is a wrap! We set a new Walktober record today for most steps in a day, we had a lot of fun doing it and we raised awareness for an important cause. Now for a long overdue good night’s sleep.

Official number is 204,371 (there was a period earlier in the day that hadn’t synced properly until I got home)

The day after I set a new Google Walktober record for most steps in a day, another Googler broke that record and raised it to 214k. That probably means that I’ll be out again next year trying to set an even higher record.

In terms of races, the last few years I’ve been enjoying doing new types of challenges and stretching myself in new ways. I’ve expanded from roads to trails, increased the mileage, played around with maximum distance, elevation and steps challenges. One thing remains constant though, my need to keep my body in good shape and dig deep in order to complete these challenges. I really like those aspects and even though I can’t train as much as I’d like, I’m happy I still get to get out there and push myself.

That said, I’m not a huge fan of 24 hour races, they are so long and impact my sleep, which is already fragile. I feel like I can have just as much fun with a shorter event. Nonetheless I’ve been eyeing a few 24 hour races that take place on tracks or short loops and now that I know I can do that without getting bored, I might need to see what my distance limits are.