On November, 2017 I ran the Gobble Gobble Kids Dash with my two oldest boys. Here is the race report.

This was the first official race my three year old ran – he got his own bib & everything. My two year old was technically too young to register, but we let him run some of the race with us as well.

This is part of me exposing them to the sport of running and what it has to offer. My kids have been watching me be a runner as long as they can remember (my two year old asks ‘are you going running daddy’ whenever I put a synthetic shirt on) and going in the stroller for just about as long (this past summer they even got to participate in their first race, riding in the stroller), but this was their first time where they got to be the runner in a real race. I wanted them to experience all the things I love about racing, but hopefully not traumatize them.

While the race ended up being pretty rough, and tears were shed – both boys already look back fondly on it (sort of like our first camping trip). Now when they hear me telling racing stories to friends, they have their own to chime in with.

Thanksgiving brought with it a cold spell. We had just had the first frost one week early and up until then we’d still been having days every week hit the 70s. That morning when we woke up, however, it was 18 degrees. It wasn’t something we were prepared for – we hadn’t had practice dressing for the cold and were about to run an 8am race.

We bundled up as best as we could in foreign winter clothes, garments we weren’t used to as Californians.

I had previously planned to run the adult race but was coming down with a cold, so opted out the day before. That meant the kids dash was the only thing on our mind that morning.

We left the house at 7, plenty of time to pick up some breakfast on the way at our favorite bagel place, who also happened to be a sponsor of the race. Unfortunately, they were closed because it was Thanksgiving. I guess that makes sense, but it wasn’t planned for.

Ok, backup plan, Burger King. It isn’t great pre-race food, but at least they’ll be open… But of course, they were closed to.

No worries, the race is happening in the historic downtown, there are a bunch of coffee shops down there that will be open because of the big race that is happening… right? 20 minutes of walking around and nothing was open.

We’re now 30 minutes to race time and my three year old is starting to complain he is hungry and cold. I messed up. My choice now is to try and get him to hold out for the race and solve both of those afterwards, or fix them now and forget the race.

Like any good dad I told him to toughen up and that he could eat when he finished the race.

We got in the car, cranked the heat and drove until we found something that was open. A fine dining establishment called Sheetz. He had a few bites of a breakfast sandwich in the car and I carried the rest so we could have it post-race. As fast as Sheetz is at making sandwiches, and as fast as I ran from our car, we got back just in time to hear the race starting. We’d missed it.

We were about 50 yards down the course and as the runners passed us I told my son we should just hop in and start running. He broke down crying. I was able to gather from a few barely-comprehensable \ words that he wanted to go across the start line. So we ran backwards on the course to the starting line and I counted down.

On your marks. Get set. Go!

We’d been practicing race starts and finishes over the summer on the track. He knew to lean down over one leg to start and to throw your hands up at the finish line. This was an immutable part of racing is his mind and to neglect it would invalidate the entire experience.

So here we are running on the course, a good 200 yards behind the lead pack. The course went straight for one block, around the court house building and then back that same street we were running down. We were far enough behind that as we neared the turn, the 12 year old boys, the oldest allowed in this race, were coming straight at us with all of the caution and calmness you would expect from a group of 12 year old boys that are amped up on holiday excitement and competitive juices.

Despite us staying to the side of the course, closest to our turn, my three year old nearly got trampled by boys four times his size. Thanks to a few stiff arms from me, he stayed safe.

Only sort of kidding.

As we rounded the court house we actually passed some people. Other young runners who had decided they didn’t want to go any further. Some parents were negotiating, others had picked up their kids. My boy was loving the experience. I’m just glad we weren’t in last place anymore. 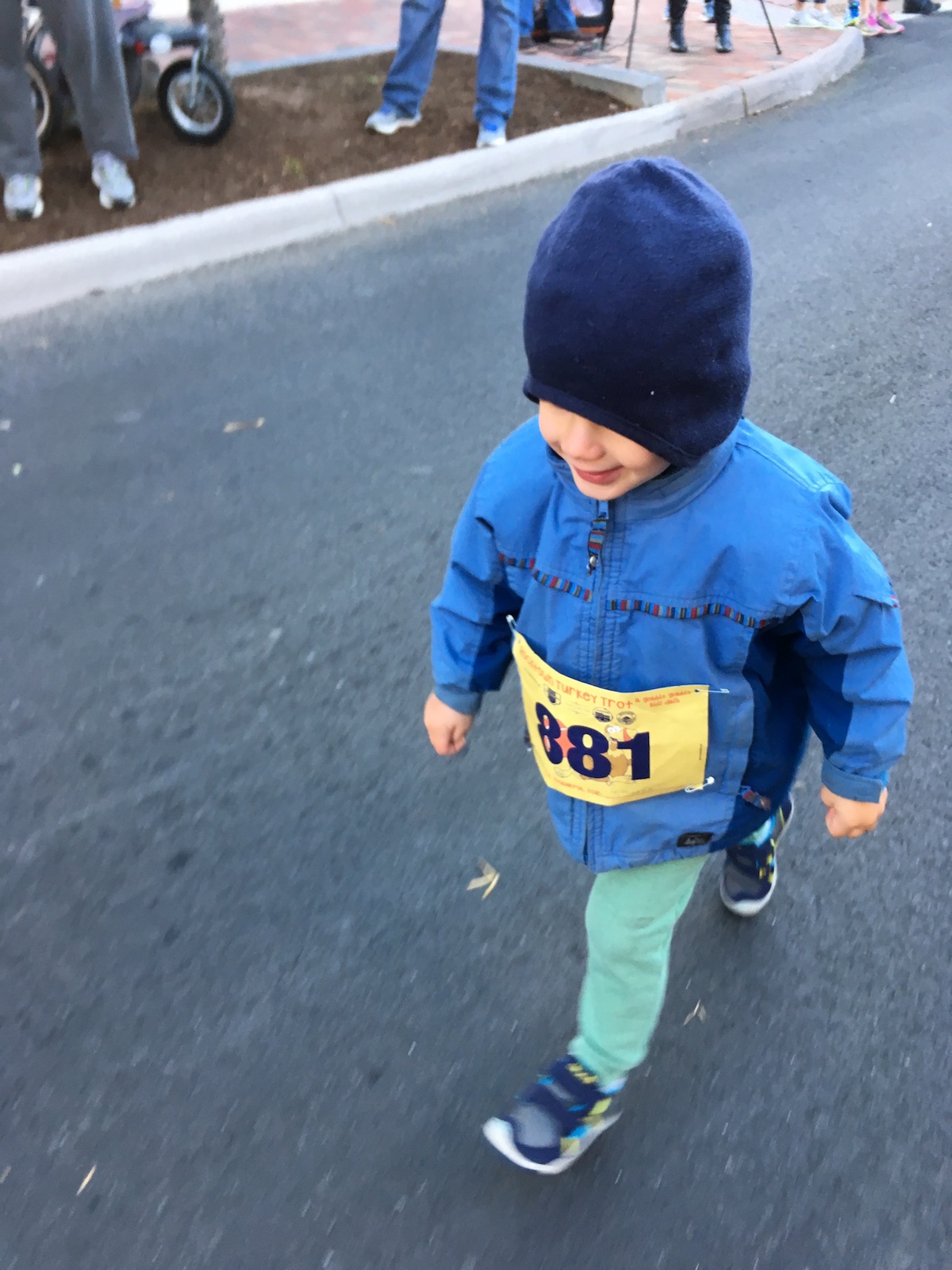 I was so proud of my boy during this stretch. He was so focused and working so hard, but he just isn’t fast at all. Even for his age he’s kind of slow, he bounds too much and doesn’t drive forward enough. My two year old has some speed, but he’s unpredictable, just as likely to stop or run the opposite way. Maybe I can get them to train together, the focus of one and the fervor of the other would make a runner that could surpass me.

We turned the fourth corner and were looking straight at the finish line, now two blocks away. My son asked if we were almost done and I pointed out the inflatable black archway that marked the goal. I got to watch as he processed for the first time a feeling I am addicted it. The relief that comes from seeing the place where all of the pain I have willingly subjected myself to will finally end. I took his hand in mine and said ‘we can do it’ and we re-doubled our efforts. 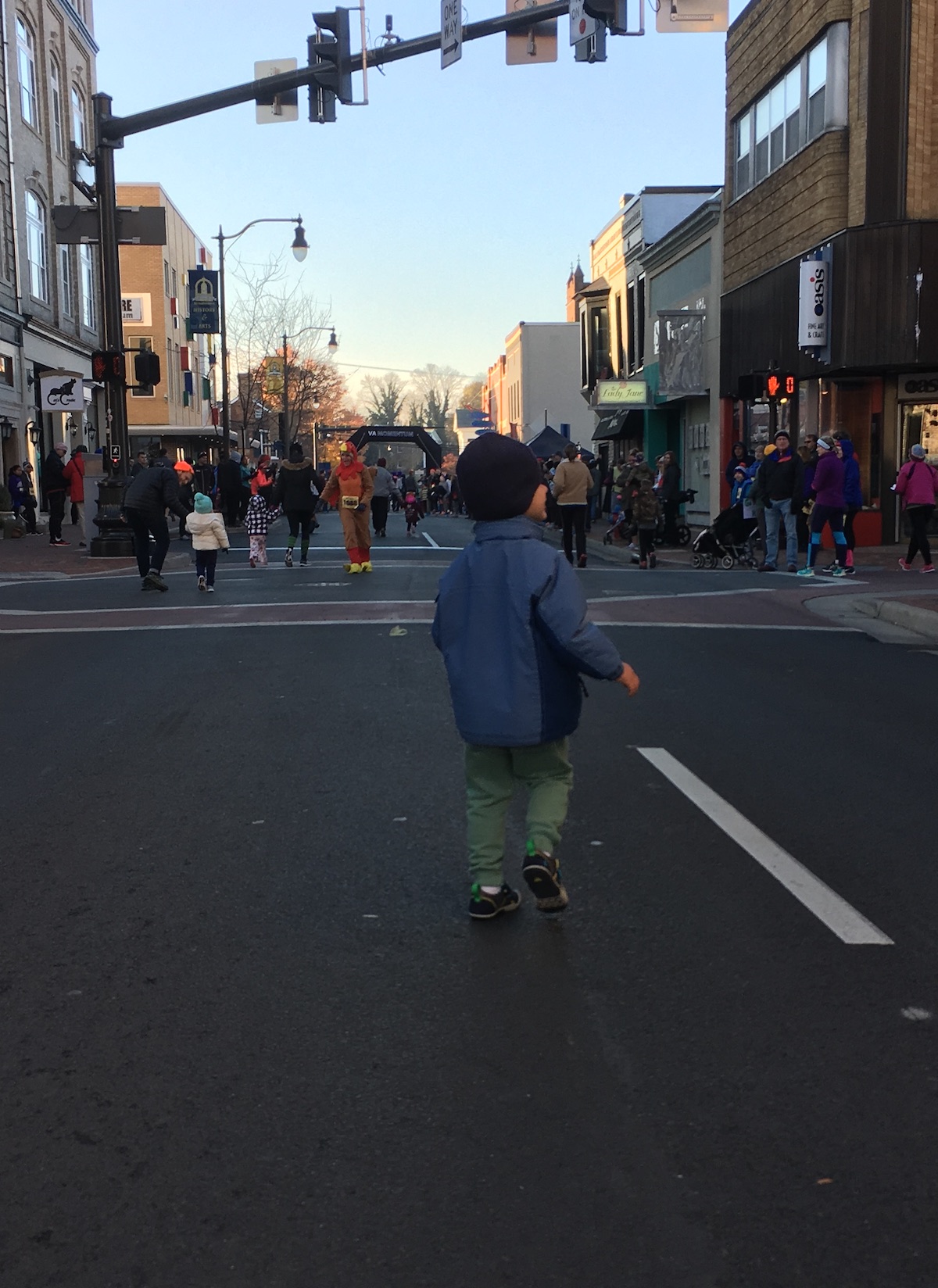 One block from the finish my two year old, who had come with grandpa, saw us and wanted to join. There was a brief moment where I was holding the hands of my two oldest boys, running to the cheers of a surprisingly large crowd. I look forwards to moments like these in the future and hope they’ll indulge me in a few bigger races when I’m well past my prime and they’re in the middle of theirs.

Half a block from the finish and we had a breakdown.

Here is the start of the breakdown. Notice the subtleties of this image. Despite tit being 18 degrees, none of us have gloves – great parenting. I’m carrying a bag of Sheetz food during a race – something I’ve never before seen in a race. Despite both boys crying, we are still mid-stride. 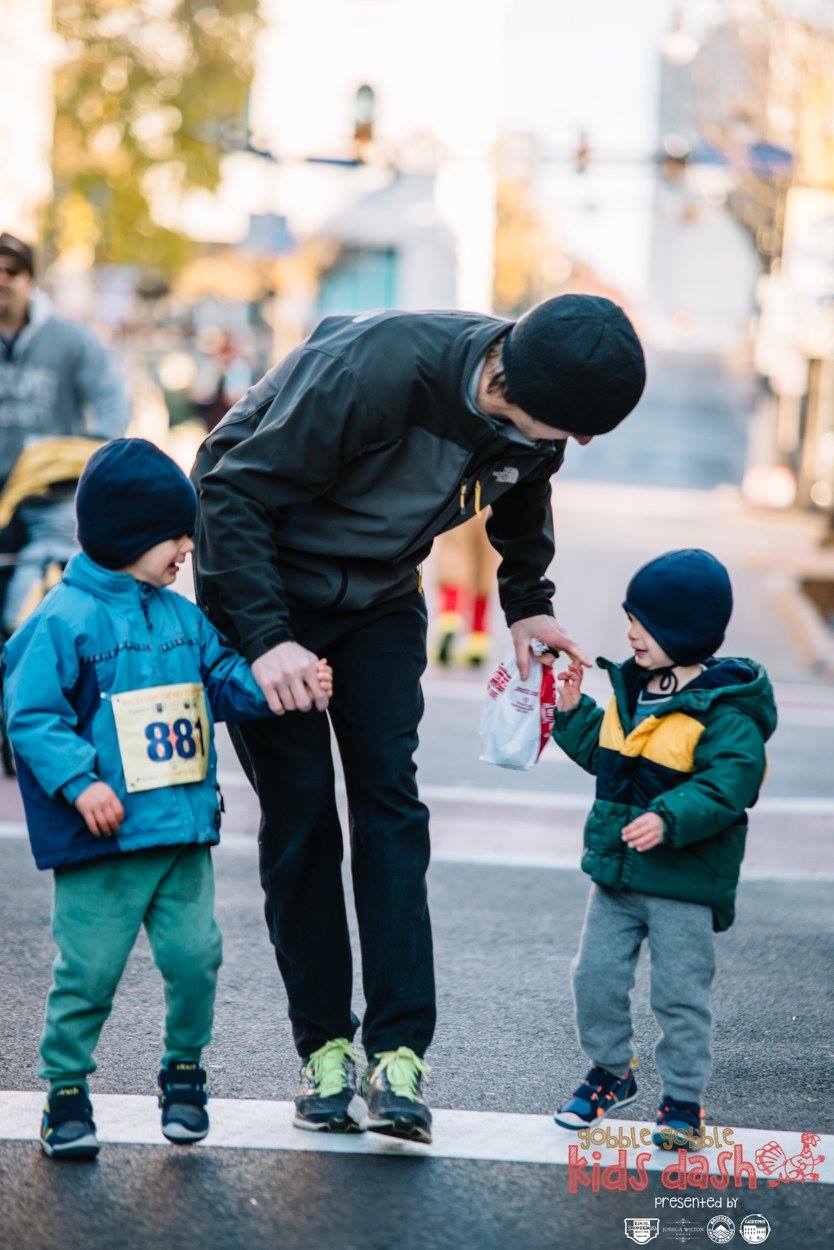 My youngest would decide he no longer wanted to run (I told you he was unpredictable) and laid down on the street. I carried him the rest of the way. My oldest was eventually convinced him to run across the line though.

Afterwards they ate their sandwiches. Look at their poor pink fingers, it was really cold out. 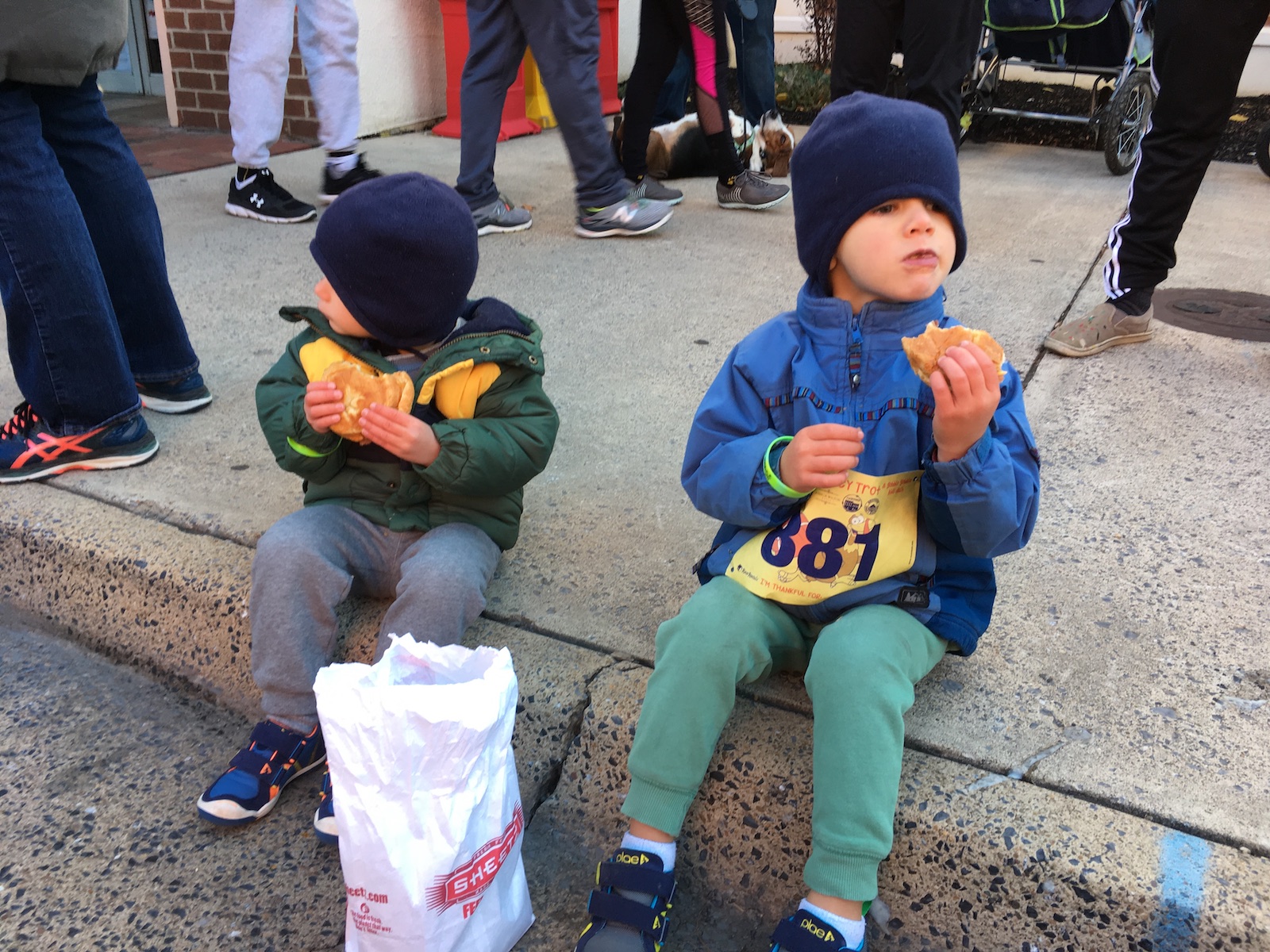 We then celebrated, got our finisher bracelets and watched a real live turkey get pardoned. Someone grabbed a nice shot of my oldest sitting on my shoulders. By this time he was having fun. 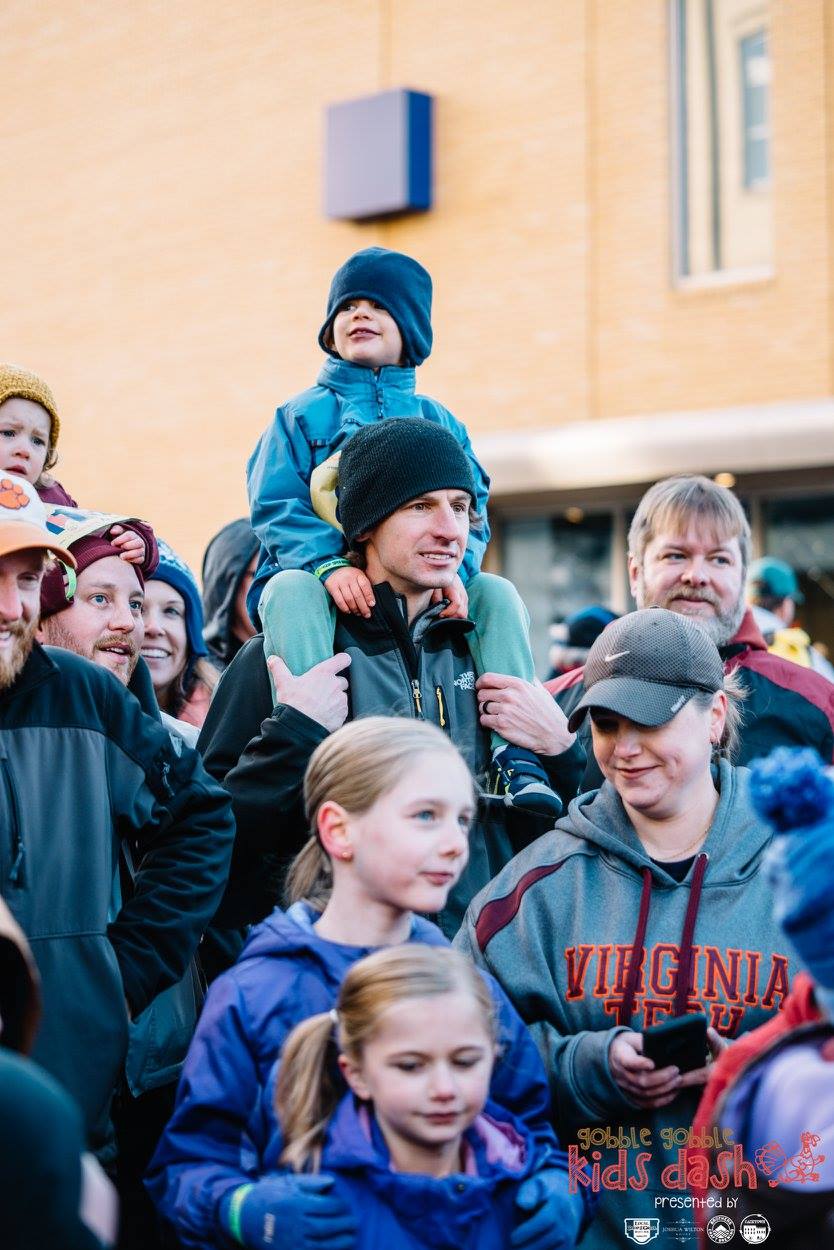 I had been told there would be pumpkin pie cups instead of water cups at the race and so I had told the boys. There was not pumpkin pie as far as I could tell, but again, young expectations. So when we got home we had pumpkin pie, in a cup. They were so happy.

Later that day, when calling grandma, we asked how he liked the race and he only had good things to say. Mainly he was focused on the fact that he had pumpkin pie.

Along with many other ways I messed up that morning, I completely forgot to track this race. It would have been cool to see how fast my oldest boy ran and how evenly he split, but I guess I can do that next time.

I suspect this will not be their last race, I’ll do better being a race parent next time.

What Makes a Good Challenge