My first ever race with a running stroller. I was invited by my friend Abram (who is also my brother-in-law-in-law) who was putting together a group of dads that were going to run the race with strollers. 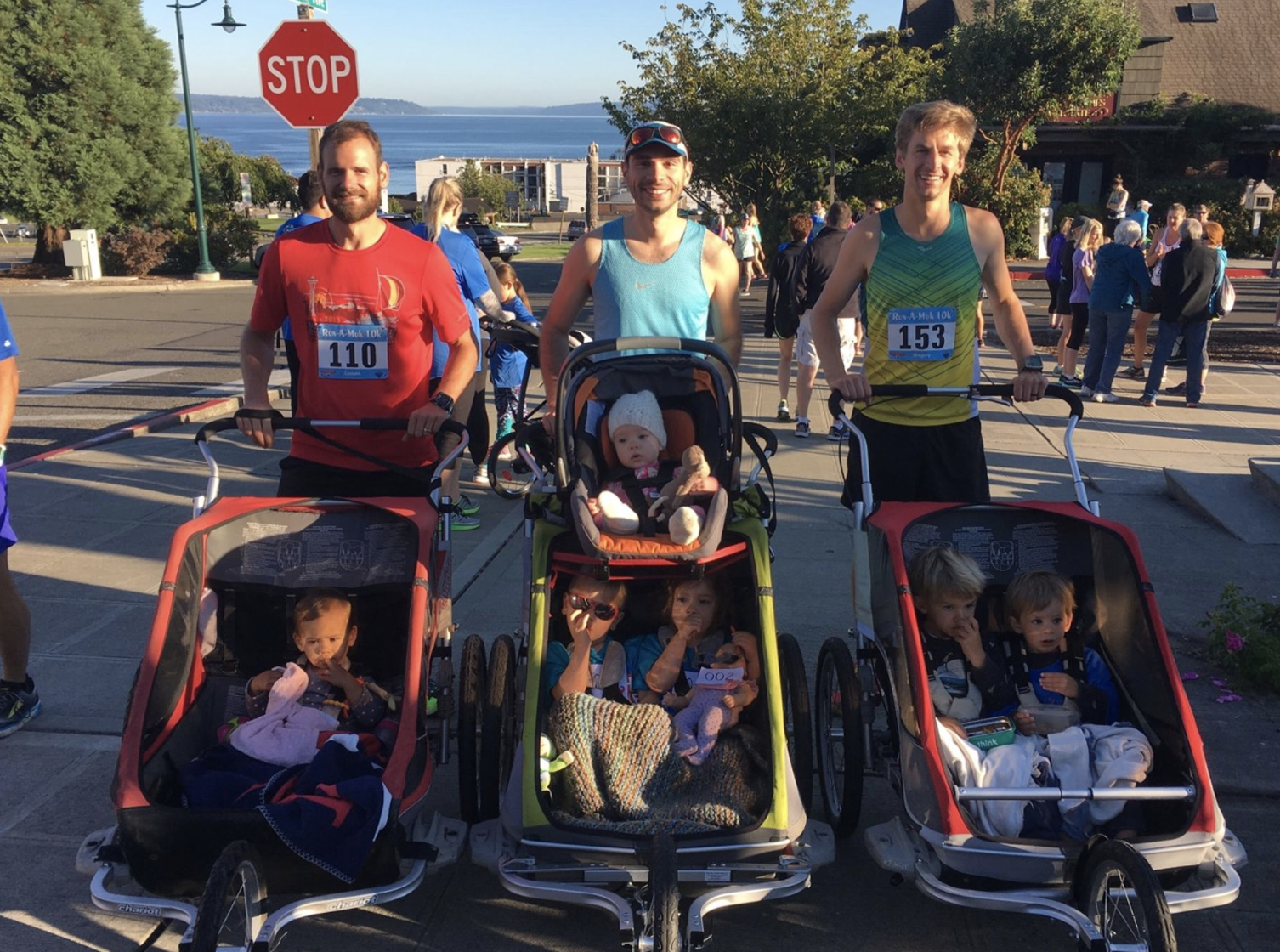 Throughout 2017 I got pretty good running with the stroller, bringing one or two kids on more than 50% of my runs. I had mastered the art of snack management for keeping kids occupied, I had made adjustments to the stroller to allow me to clock sub-6 miles, I had even turned my kids into an onboard cheering unit, ‘run faster Daddy’ their cry whenever I slowed down (even if because of a hill).

This race let me put that all to the test. I write this race report with my tongue in my cheek, it was a local fun race, mainly an excuse to get our families together, but I ended up winning my age division and getting 5th place overall, despite my 90lb handicap.

I would be running with my 2 & 3 year old for this race. (~30 & ~25 lbs for those wondering) My stroller of choice is the Chariot Cougar 2. It is a multi function child carrying vehicle that can be used as a bike trailer, running stroller or sled. It weighs in at ~32 lbs, bringing my total weight to 87 lbs). I modified the handle to get it a bit higher and farther out which lets me run at full stride without kicking the back – I found that with the original handlebar I would kick the stroller if I dropped much below 6:30/mile.

Getting into position at the start of a race when you have a stroller is a bit tricky. Usually, without one, I just slip in at the front after doing some strides just before start. With the stroller, I had to line up a bit early to block out enough square footage for my profile and I couldn’t move at all once I was there. A few people stumbled over the stroller, as most people are used to shoulders marking taken space in a start corral and weren’t expecting a wheel. 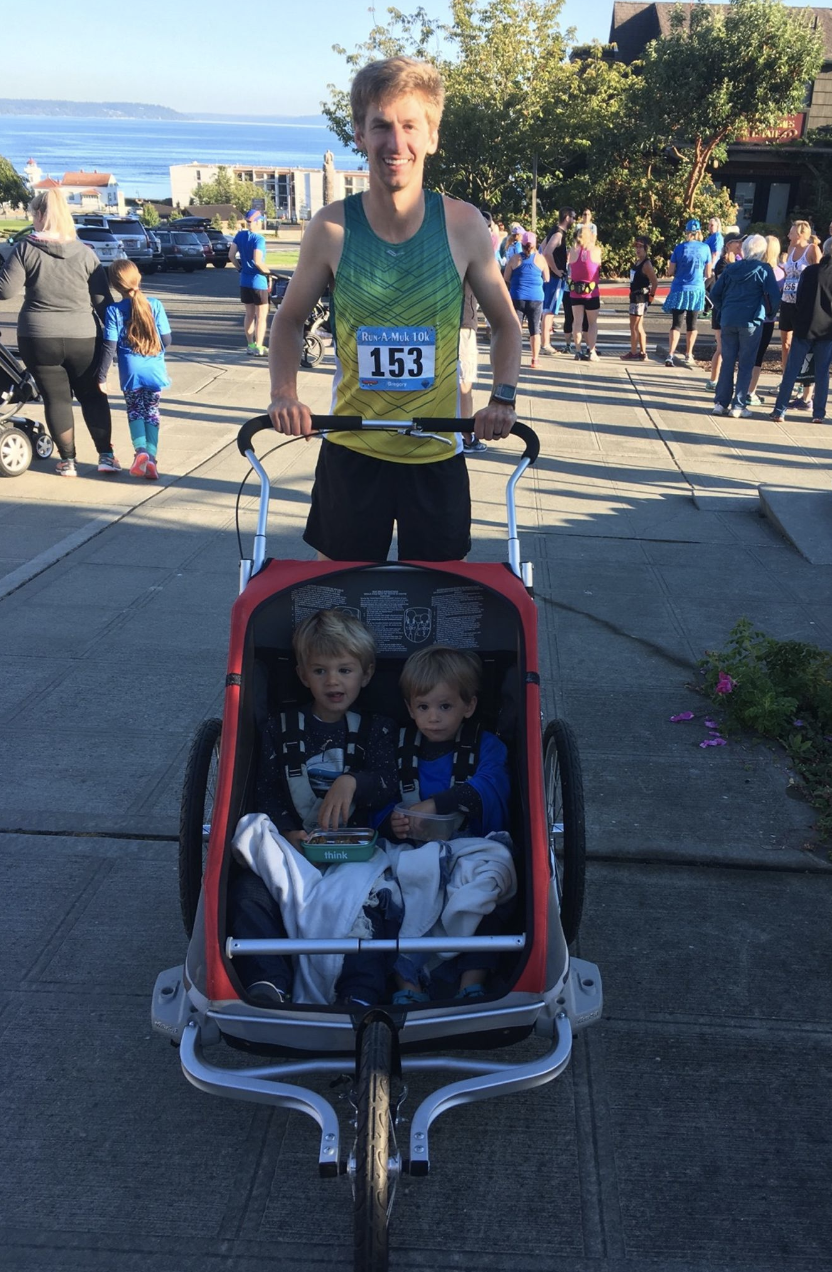 I brought three things for each child: a container of cereal with berries (it is small, so it takes them a long time to eat), a container of goldfish & raisins (their favorite, so promises of it motivates them) and a lollipop (it fully occupies their mouth for as long as it lasts, so there won’t be any crying or complaining). I had planned to use the cereal at the start, the goldfish at the turnaround and the lollipop for the final miles.

Turns out I hadn’t planned for breakfast so I used the cereal & berries pre-race and they had mostly finished it before the race started.

The gun went off and like always in a local 10k, everyone raced out of the gates at a pace much faster than they could maintain. Someone made a quick lateral and almost ate it on our front wheel, I ended lifting the wheel to move it out of the way, but that maneuver caused me to veer off course and almost resulted in me taking out the starting gate arch. I recovered though and nobody (nor any structure) went down. 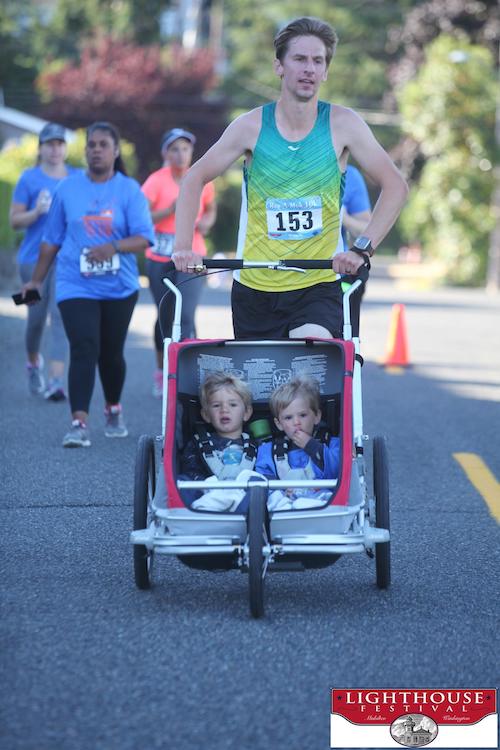 The first 1/10 a mile is downhill and I was swerving to pass people. The next half mile is really flat and I used a bell I had brought to call people out of the way. I worked my way until I realized the leader was just a bit ahead of me. I hadn’t planned on being that close to the lead but though that now that I was, I should see if I could grab it.

That is when we hit the 1 mile long uphill that climbed just under 200ft. Normally I do really well at uphills, but the thing about gravity, is it slows you down more the more weight you have. Having a 90 lb stroller in front of me down by over a minute per mile, and the other runners started passing me back. I crossed 180 beats per minute and was really working hard.

The next mile was downhill though, 100 ft change, about half as much as the uphill I had just come up. As soon as I crested the hill my speed picked up and I started passing those runners back. I then attempted a very advanced move: putting away the empty snack containers, and getting out a new snack while holding a 5:40 mile. Worked like a charm. Only problem is that snack was supposed to be used after mile 3 and I was only at mile 2.

By this point of the race I was in 5th place and as it would turn out I wouldn’t pass anyone or get passed for the rest of the race.

Mile 3 and we turned around. The race had started on a road but eventually dropped to just the bike lane & sidewalk. Cars were still using the road, and despite them being careful, it meant that crossing the line was a major no no.

Heading back, I was in the same bike lane I had just been, except now I was running straight at the 129 people. Thankfully most people were very kind and hopped up onto the sidewalk to let me keep running – hopping up onto the sidewalk with a stroller wasn’t really possible. I did pass the other stroller-dads and we gave each other some good cheers.

The path back was the exact opposite, up the smaller hill first and then down the bigger hill. I held steady around 180 bpm and kept chugging along. Sometime around mile 4 I handed out the lollipops and prepared to give it all I had to see if I could catch anyone else. I gave it a good race effort & ended up crossing sub-5 a few times on the downhills.

I was zeroing in on the 40 minute mark, which was 6:30 per mile. I had thought would be appropriate based on a recent marathon effort at 6:30 per mile – this was shorter and the equivalency charts predicted me at 6:00 per mile, I added ~30 seconds for the stroller.

At the finish chute I got bottlenecked behind two 5k runners. They had slowed down to celebrate and I didn’t want to ruin their moment by passing them, but the clock was ticking down, 39:50, 39:51… 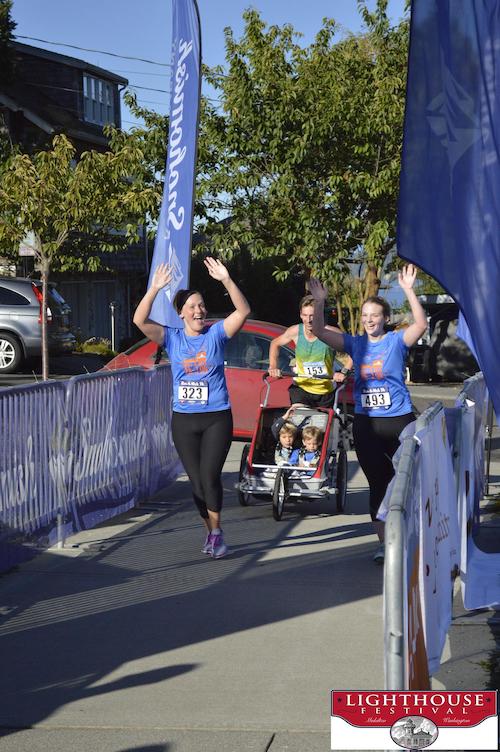 I ended up crossing at 38:58 and hitting my 40 minute goal. I guess it wouldn’t have mattered if I didn’t, but I’m glad to be able to have come in just under time. 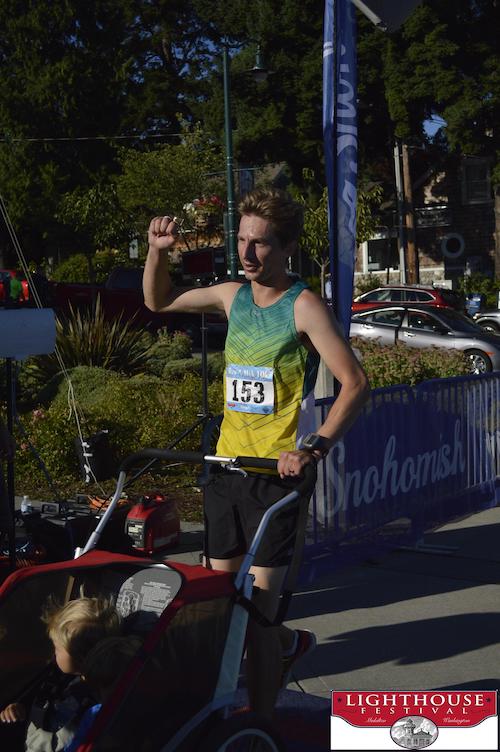 Post race, the kids go the experience the joys of all sorts of snacks and a medal they took turns wearing. I think this was a great way to expose them to racing and it went along nicely with a race they watched me run earlier in the year and a kids race they would both run later in the year. 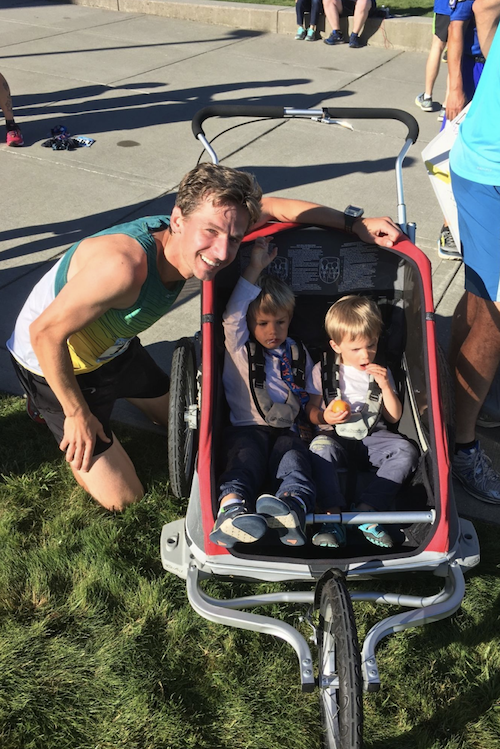 Here is our full group, four dads, 8 kids it tow and two others on the way. A great time. 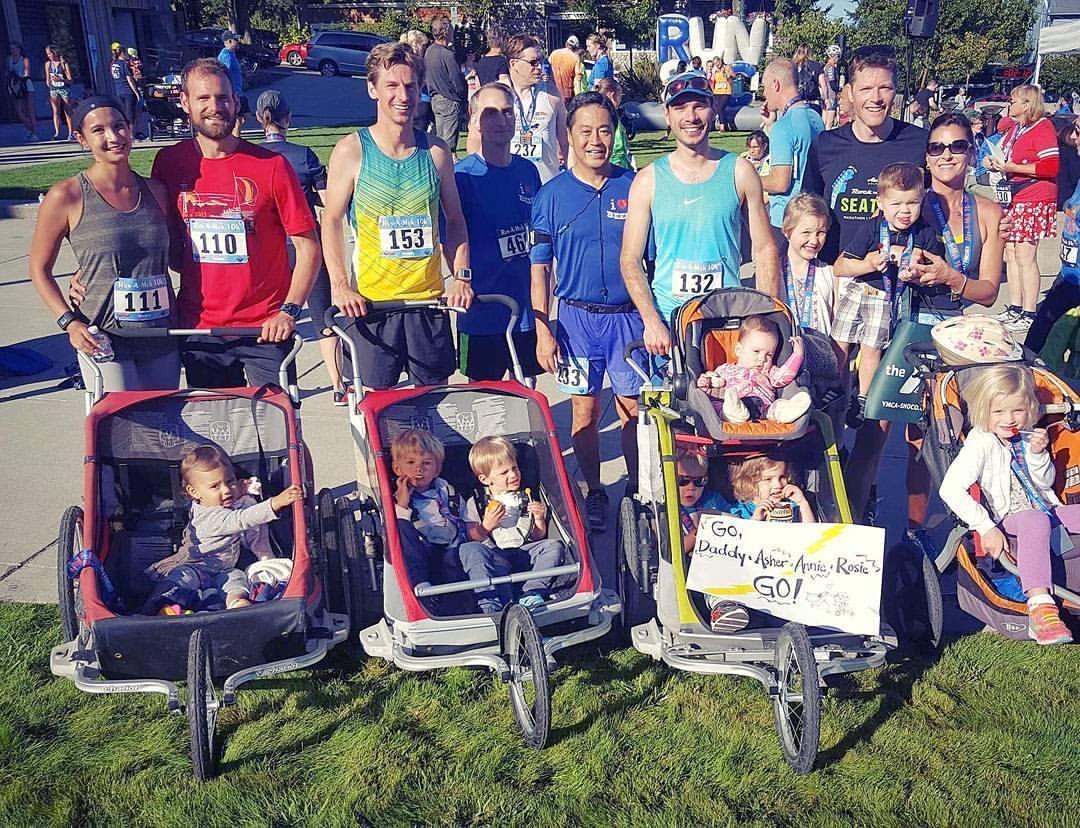 I ended up winning my age group, here is me with the other age group winners post-race. 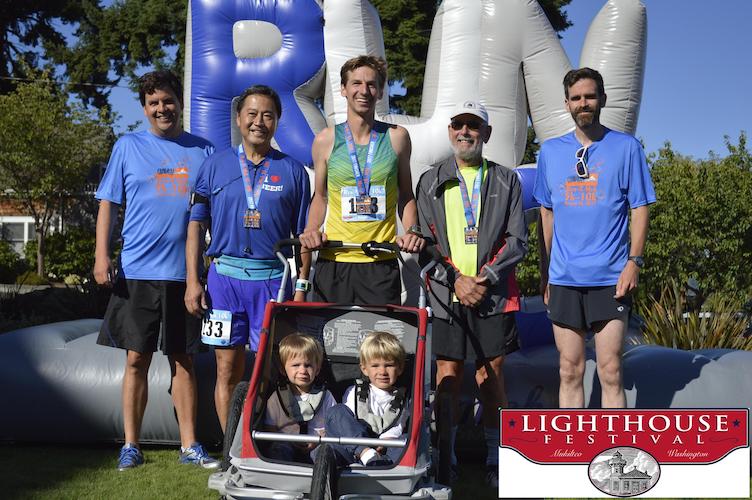 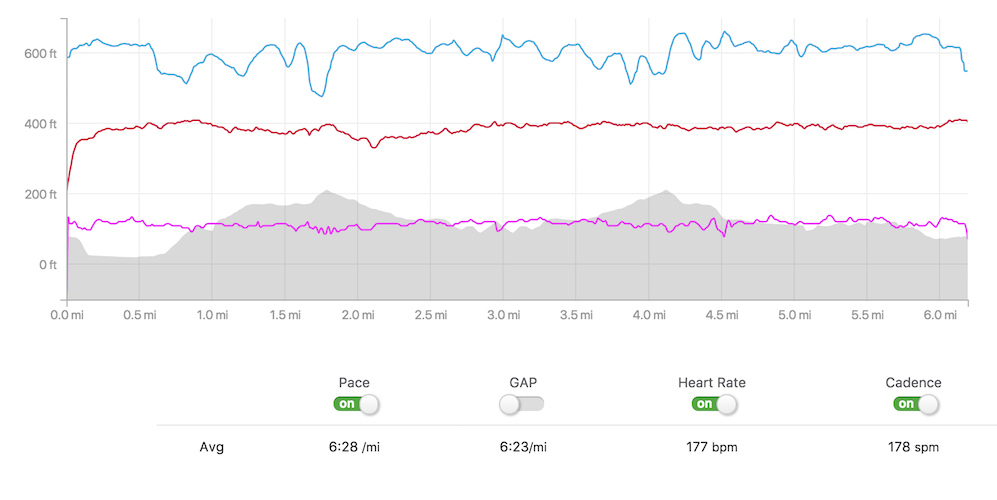 My pace bounced around a good bit, but that is because the extra weight of the stroller made uphills hurt more than usual and downhills help a bit more. The fastest speed I hit was 4:47 and my fastest mile was the final one, which came in at 5:56. Average was 6:28, which is where I wanted to be.

Heart rate wise, I quickly spiked to over 180, which is where I want to be for a 10k. I let off the gas a bit as I peaked the first hill, after that brutal climb with the stroller, I was glad to catch my breath, but shortly thereafter started working my way back up. From mile 3-6 I stayed pretty steady in the high 170s for an average of 177. I think I could have been a bit higher.

I really liked doing a stroller race, it was fun having the kids with me, the stroller added some extra mental stimulation and the handicap meant I had more competition to run with in a race I would have handily won otherwise. I’ll definitely consider it in the future for local races I’m running for fun.

A word of advice though, not all races are good for having a stroller. This one worked out because there were only ~150 runners and it very much had a local vibe. The website mentioned it was stroller friendly and we contacted the race director ahead of time to clear it. I’d suggest doing the same if you intend to run fast with a stroller as opposed to staying in the back, which is what some races expect.

What Makes a Good Challenge