Today is a great day for Atlanta Falcons fans. All-Pro tight end Tony Gonzalez announced he is coming back to play for one more year!

To celebrate, lets take a look at some stats from Tony’s career and see why he is often praised as the greatest tight end of all time.

Here is a preview image so you can look at something while the full thing loads… its kind of big. For the full infographic keep scrolling… 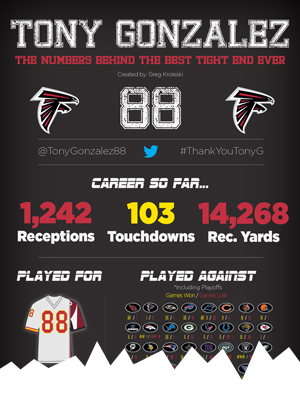 And here is the full infographic, which hopefully has loaded by now. To see it glorious full size, click the image below and then magnify it on the next screen. Enjoy!

I originally started this project as a way to dig into Tony’s stats to show that he should return for at least one more year. When I realized that his decision was largely based on personal matters – not stats – I decided to call an audible and instead make an infographic to either celebrate if he announced his return or to look back on his career if he chose to retire. I for one am glad we get to watch him play for one more year.

If you want to read about the process of making it, check out the other posts about it, here: Making of the Tony Gonzalez Infographic

Thanks for enjoying my work!