This weekend I took my Mavericks gun out for a paddle in the small waves on Bolinas, CA.

To give some back-story, about a year ago I decided I wanted to surf Mavericks and took the first step I normally take when facing new challenges; I bought a surfboard. I named her ‘Hail Mary Mother of Grace’ because some day when I take her down off the wall racks to surf, it will be accompanied by much prayer from my loved ones. 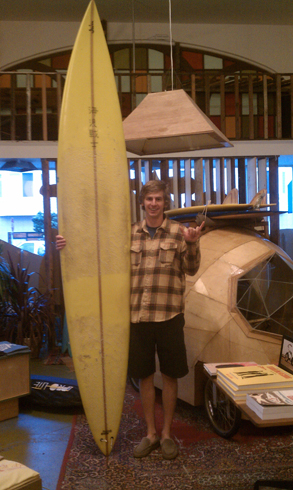 This weekend wasn’t that occasion, but it was the first time in a year she left her perch in my living room. I wanted to get familiar with how she paddled, how hard it was to duck dive and how the rails held the face of a wave.

Paddling a gun is different than anything else I’ve ever been on. It sits high in the water like a longboard, but it is so narrow that it rocks easily, requiring a lot of core to keep it stable. The nose has a ton of rocker, meaning it sticks out of the water, but there isn’t much foam, making it easy to get too far forward while sitting. Finally, whenever I’m on a board with that much foam, I’m used to having at least 10″ of fin beneath me – Hail Mary has a thruster setup, so there wasn’t the hold I expected.

It’s a good idea to be familiar with equipment before trying something new though, so I’m glad I had the chance to paddle a bit.

One last note on Hail Mary. The script below is written on the deck. I have no idea what it means, though. Anyone have an idea what it says, or even what language it is? 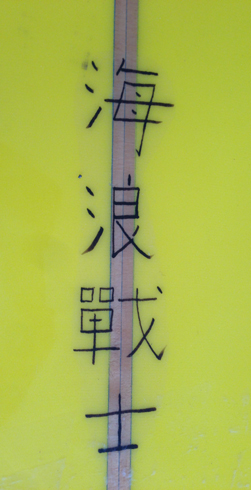 Here is how I’m doing at holding my breath:

As I neared the 3 minute mark my vision started to go blurry so I started breathing again. Getting that next minute and a half will probably be a combination of being familiar with the feeling of being oxygen deprived along with additional lung capacity and decreased oxygen need.

Shoulder: Wrapping up PT, more strength training needed to keep stress off of the joint