This is the third post in a series about my fantasy football auction strategy.

I first wrote about the strategy here.

Then after the season I started with part 1 of the retrospective.

The Importance of the Draft

Below are the positions each team ended in and the difference between their expected and actual results. 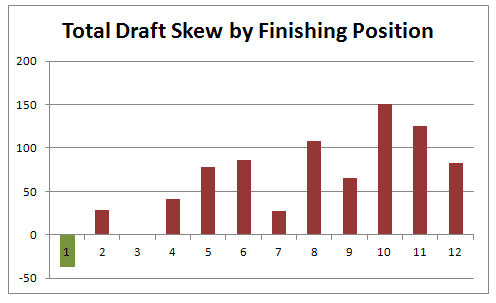 We can see that in general, teams that predicted well on draft day performed well in the season. The r squared for the linear trend line here is .63 which means that for my seasons we can contribute about 63% of the final results to draft performance.

What accounts for the other 37%?

I would simplify the decision types in fantasy football by describing three.

Looking back at my draft I realize that I optimized for a scenario where the draft accounted for >90% of the final results. I assumed a greater level of predictability than was possible and minimized the importance of in-season transactions. I also created a coaching nightmare for myself.

Thinking about in-season transactions, it is important to understand how many players went undrafted but ended up being extremely valuable. In fact of the $1,945 of actual skill player value my league saw, only $1,553 was drafted. About 75%.

Knowing this we can see that trying to draft a team with a lot of mid level talent can actually be detrimental. Lets think back to my scenario where some teams drafted 10s & 1s, while I tried to draft only 6s & 7s. We now know that 25% of the value of the season had yet to be discovered. Many of those were 5-7s though Knowshon Moreno was arguably a 9. On my team of 6s & 7s I had a hard time acting on the emerging talent because it meant giving up an equal player from my team. Another teams with some 1s however would have easily given up those duds for a mid level prospect.

The pre-draft % of money spent I had allocated to starters was 90% of my budget. Next year I’m going to consider spending all of my money on 70-80% of my team, knowing that I’ll have a few duds in there for the first weeks, hopefully to be quickly dropped for emerging talent.

So as I think about a strategy for next season, that is one more factor to take into account.