Here I am again. Race week.

I was gifted an extra two months to train when Ironman Lake Tahoe was cancelled in September. Once I found out I was going to race Ironman Arizona in November, I decided to extend my training by adding another build phase followed by a taper. Here is how that went.

Instead of just trying to extend my peak, my plan would ideally allow me to push myself even further before getting race ready again.

Those extra miles pushed me over the 4K mark. 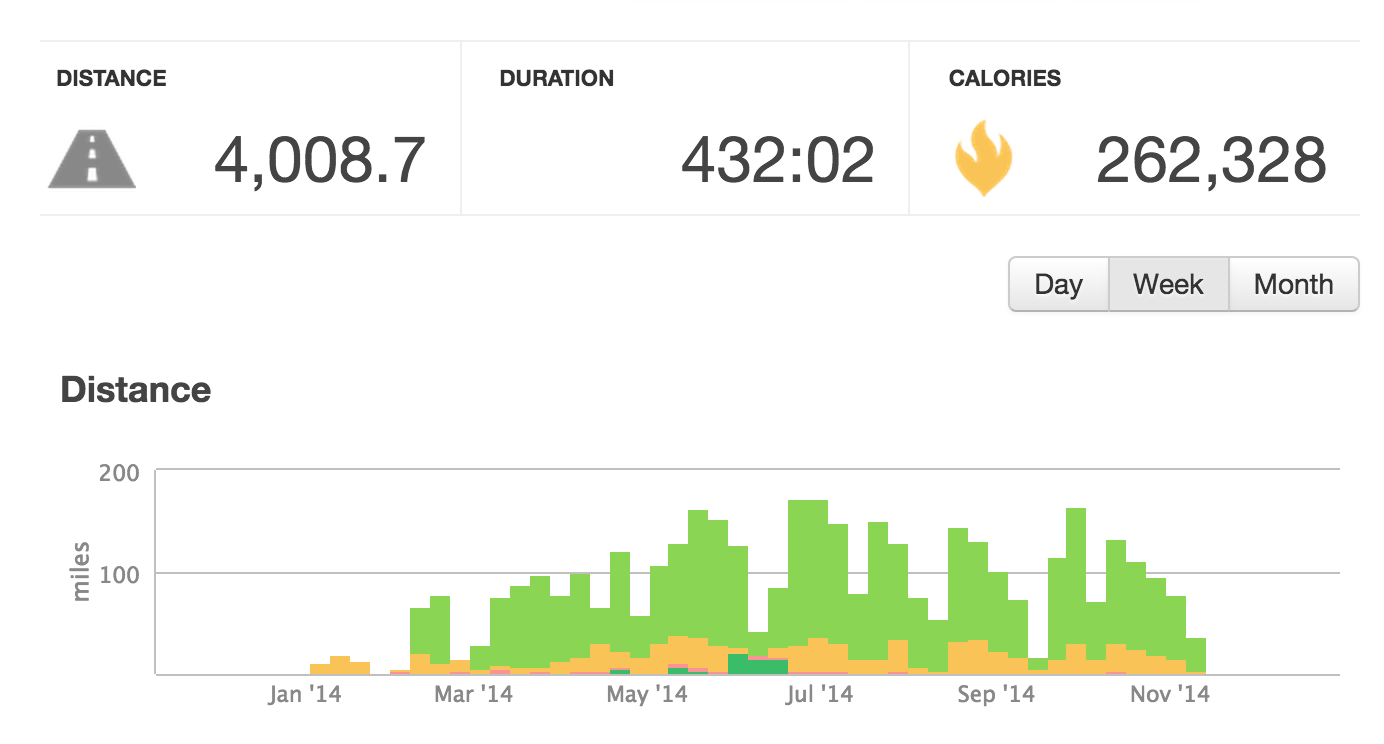 You can see the really low week in September – that was when the last race was supposed to happen. After that I built back to my max milage over the next two weeks. I planned to build for a third week, but was getting a bit burnt out and took my rest week early. That then allowed me a nice 5 week taper in which I still got plenty of quality workouts.

Along with adding miles, I also worked on a few specific areas to prepare for this new course – which is quite different than my previous one.

The swim is by far my weakest event. I will be happy to finish in the top 20% of my age group (Compared to the run where I want to win)

The two things I wanted to work on were my technique and swimming in open water.

I had been meaning to do some more technique work before the planned race, but never got around to it. Given some extra time, I finally brought my GoPro to the pool to film my technique from a few different angles.

Though I’m not a great swimmer, some of my friends are. I got feedback from a few people that among them boast years of coaching, D1 pedigree, D3 championships and an appearance at the olympic trials.

The feedback was that I have decent body form but need to work on my arms. Specifically the catch & pull. I focused on that a bit and was able to make some improvements.

The second part was swimming in open water. This year while training I’ve swam 88 miles. Only about 6 of those, prior to the last month, were in open water while wearing a wetsuit – the conditions the race will be in. Swimming open water is quite different than a pool and the wetsuit changes things a bit so I wanted to make sure I was more comfortable.

Thankfully the pool I swim at closed for repairs and over the last month I’ve done all my swimming in the bay. That gave me a chance to get more miles in while wearing my wetsuit. There is actually quite a bit of resistance in the shoulders while wearing the wetsuit and since I am coming off of a shoulder injury last year, this was one thing I was worried about. Along with a few quality workouts I did one race simulation where I swam a full 2.4 miles at race pace without any problems.

Compared to earlier this year I am now 1,000X more comfortable swimming in open water. I’ve gotten used to the cold, don’t worry about not being able to see what is below me and am much more efficient at spotting & navigating. Most importantly, I am comfortable and can get in my rhythm, which is so important for swimming.

The nice thing about the Ironman Arizona bike course is that it is flat. That comes with a down side though – it means I’ll have to be tucked in aero position for the whole ride. The Lake Tahoe course alternated between flats, uphills & down hills. That meant I could change positions periodically which is nice.

Since the course was hilly, I trained on hills. When my race plans changed, I realized I needed to spend more time on flats and get used to being in aero position for a long time. To help me with this I changed up my routes a bit and decided to do some of my quality workouts on a flat stretch of road by the coast instead of going up hill like I usually did.

Here is one such workout – you can see from the top elevation chart that after I got over a few hills to get there, the road was perfectly flat. I did 5 loops to extend out the distance. 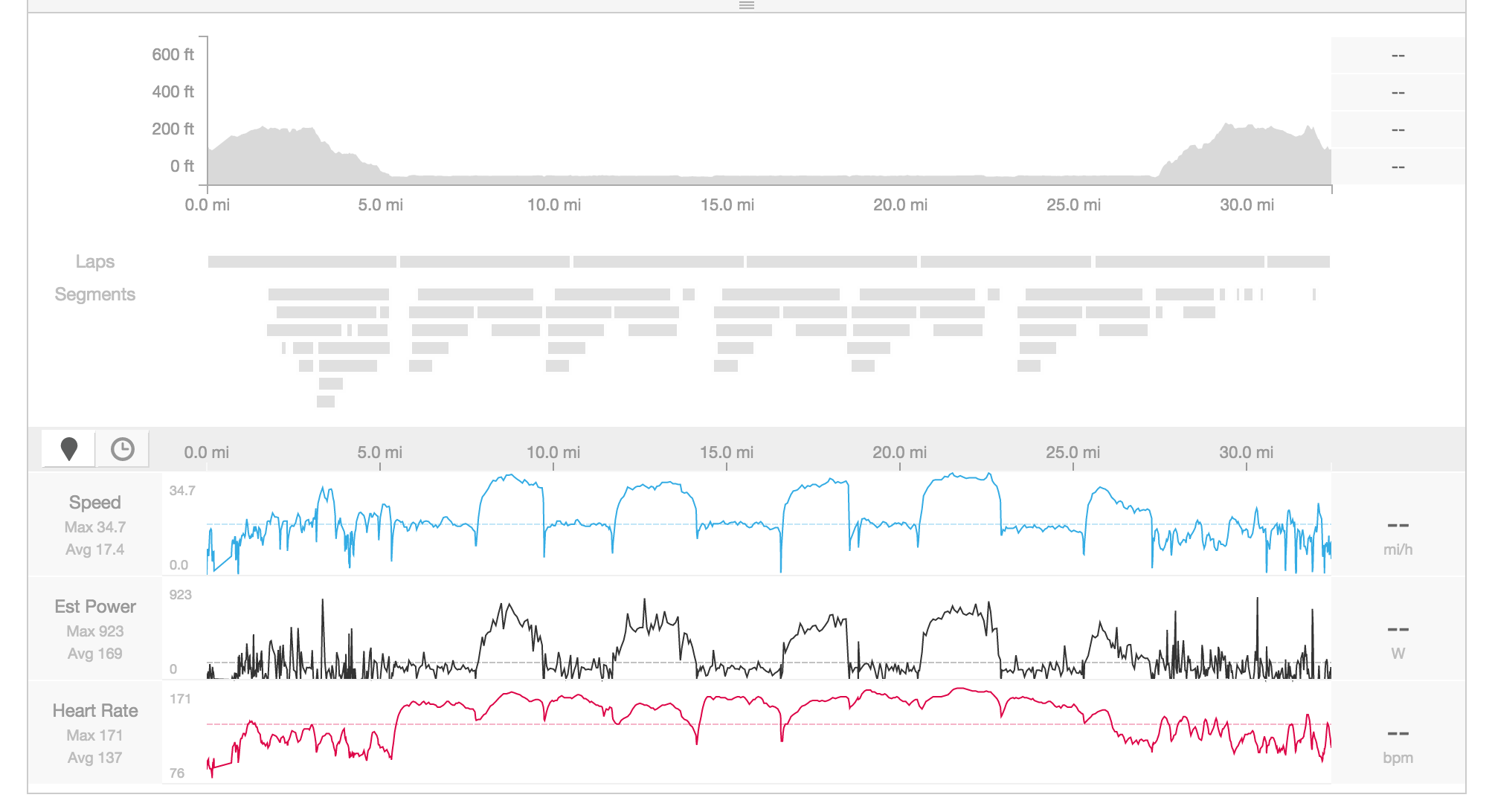 Now another thing that Ironman Arizona is known for is the wind. This particular workout gave me plenty of practice at that. You can see my speed, the blue line, varies dramatically as I changed directions, though my effort, the pink line, stayed in the same range.

In fact, the wind helped boost me to my first KOM – meaning of the thousands of people to bike that stretch and record it with Strava, I was the fastest. I averaged 30mph for that stretch.

While running is my strongest event, I haven’t actually ever run a marathon. My racing background is mostly in the 2-6 mile range.

While training for Lake Tahoe my longest run was 18 miles. Typically coaches recommend you hit a long run of 20 miles for a marathon. For an Ironman, even longer is probably recommended. I had attempted to run 20 miles once but ended up stopping after 17 that day on account of a cramp.

Having some extra time, I was able to get in some more long runs. One such run was the day after a 90 mile bike. I attempted 20 at race pace and was pretty consistent except for a few hills around mile 15 & 19. 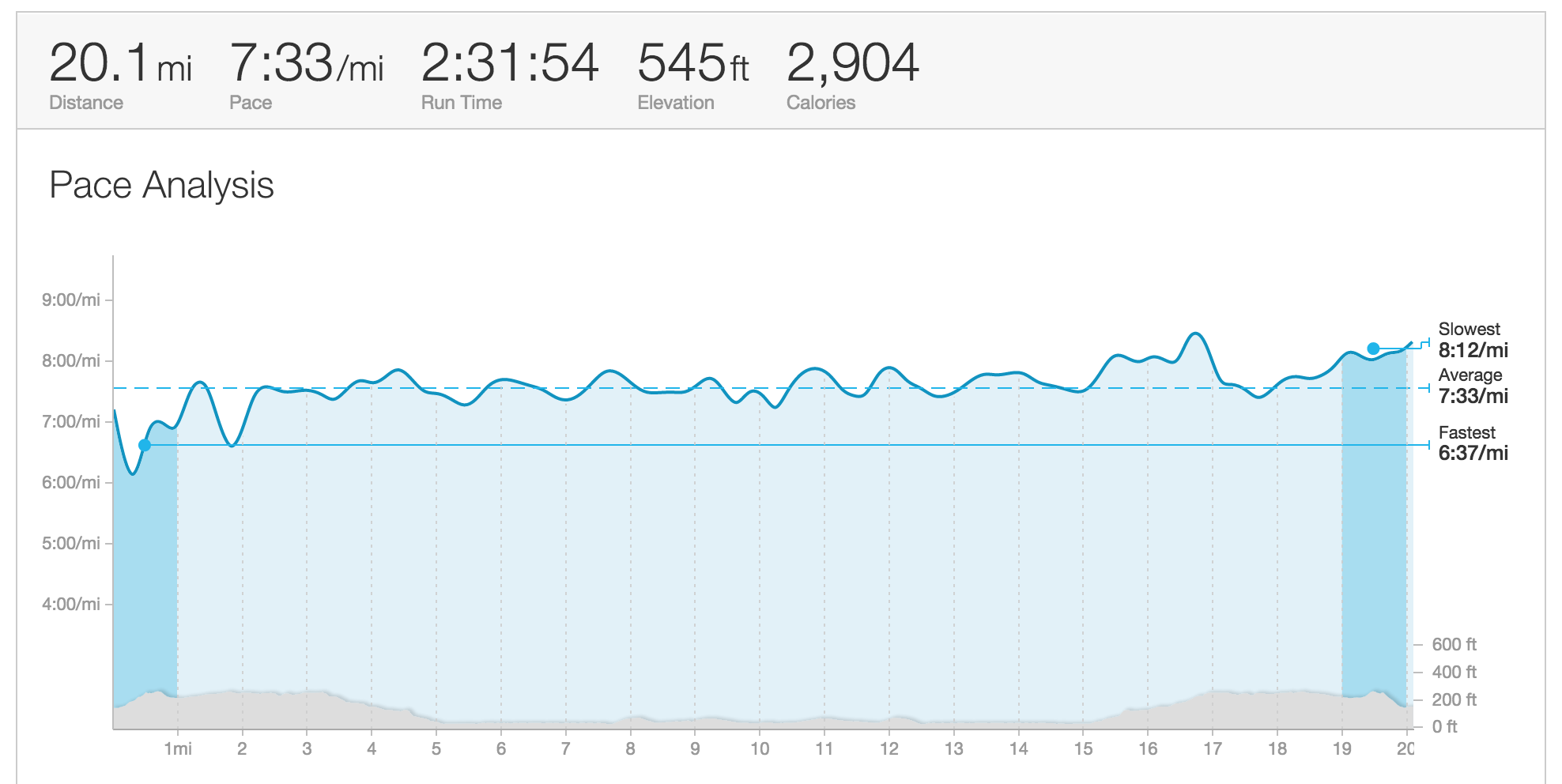 The workout that broke me before my last race was a metric Ironman. It is a brick where you bike 70 and then run 16 at race pace. I tried it up at Lake Tahoe and around mile 12 of the run everything broke down. I’m still not sure what caused it, whether it was something I ate, how much I ate or just the altitude. Either way, I wanted to redeem myself.

The bike went great – I hit my milestones.

The run wasn’t what I was hoping for.

I had been sick the previous week with a bit of a respiratory thing & had taken two days off – which is extremely rare for me. Despite that I decided to attempt this race after only one half day back.

As I started the run my lungs felt extremely tight. I was struggling to breathe against the constriction of my heart rate monitor strap. I pushed through it and actually held a decent pace until I hit the hills on the way back. I ended up walking a few stretches and finished the run at an average of 9:09 which is a minute and a half slower than my goal.

Here is the second attempt (above) compared to the first attempt (below).

This is the one thing that is still haunting me. I’ve had plenty of good workouts at each of the sports, but this is by far the most grueling and it has broken me twice. I’m worried that race day, which is even more intense, will do the same. At the same time, both broke down for different reasons and neither of those reasons are a concern for this weekend. Nonetheless, I am nervous.

Before Ironman Lake Tahoe was canceled I posted about my race strategy. I won’t repeat everything here – just the parts that have changed.

A good race is one in which you conquer your mind and do something you didn’t think was possible. That is what I’m going to have to do on Sunday because I don’t think the following is possible.

I think any one of those is possible, but stringing all three together seems impossible. If I miss though, I’ll likely still be in a good position to finish in the 10 hour range, which I would be pretty happy with.

Thankfully, this is not an issue like it was in Tahoe. I don’t have to deal with a temperature range of 40*. Instead, most of the day will be nice and hovering between 70-80*. These are great racing conditions.

I plan to wear my tri suit the whole time to save having to change.

I have been training for this race for over 10 months. I am ready to be done. I’ve fought off burnout a few times and thankfully been able to avoid any serious injury. I’ve put in the work and as nervous as I am now, I know I can trust my base.

When the cannon goes off tomorrow all I can do is stick to what I know and log miles at a steady click.