I got in to Ironman Arizona! On November 16th I’ll have a second chance to complete my 2014 challenge.

I am particularly excited because Ironman Arizona was actually my first choice back when I started looking into races in January of this year. It is such a popular race though that it was full almost as soon as registration opened last November.

This changes a lot of things though. Before we look at that though I’d like to take a second to talk about the Lake Tahoe Ironman.

Immediately after the race I shared some of my thoughts. Having a race canceled 15 minutes before the start is a rough way to start a morning. Especially a morning you’ve been looking forward to and training towards for 9 months.

After the fact though, I learned a lot about air quality. Here is a screenshot from Wednesday when things were decent. If you look at that top graph you can see that starting on Saturday, things were mostly in the green and yellow – which is an acceptable place to be. Sunday night though, levels shot up. They stayed in the red, unsafe zone, for most of the next few days.

Since this chart didn’t update in real time, I actually learned how to get a pretty good read by looking outside so that I could find time to train. You can see that there were some clear spots in Monday and Tuesday, I managed to get rides in during those stretches.

Stopping the race was 100% the correct decision. I wish it had been done a hour earlier, but understand that the race officials were hoping things would change. Unfortunately they didn’t.

While we’re on the topic of air quality, I wanted to show something else I learned this weekend.

I was googling a lot about air quality and the effects of it and it so happened that world leaders were gathered and talking about that topic. President Obama called China out and I decided to check the data myself. Here is how our countries compare. 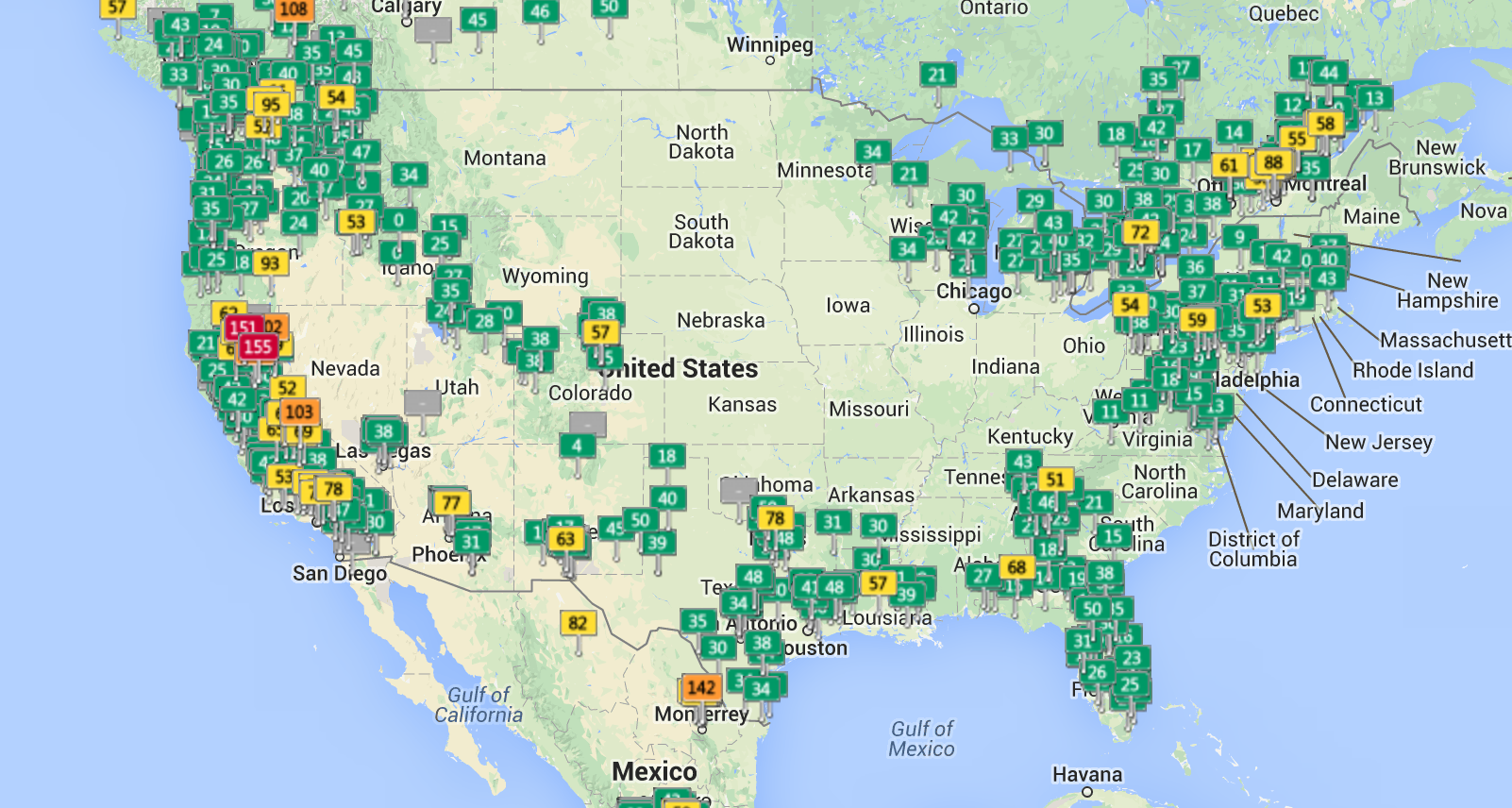 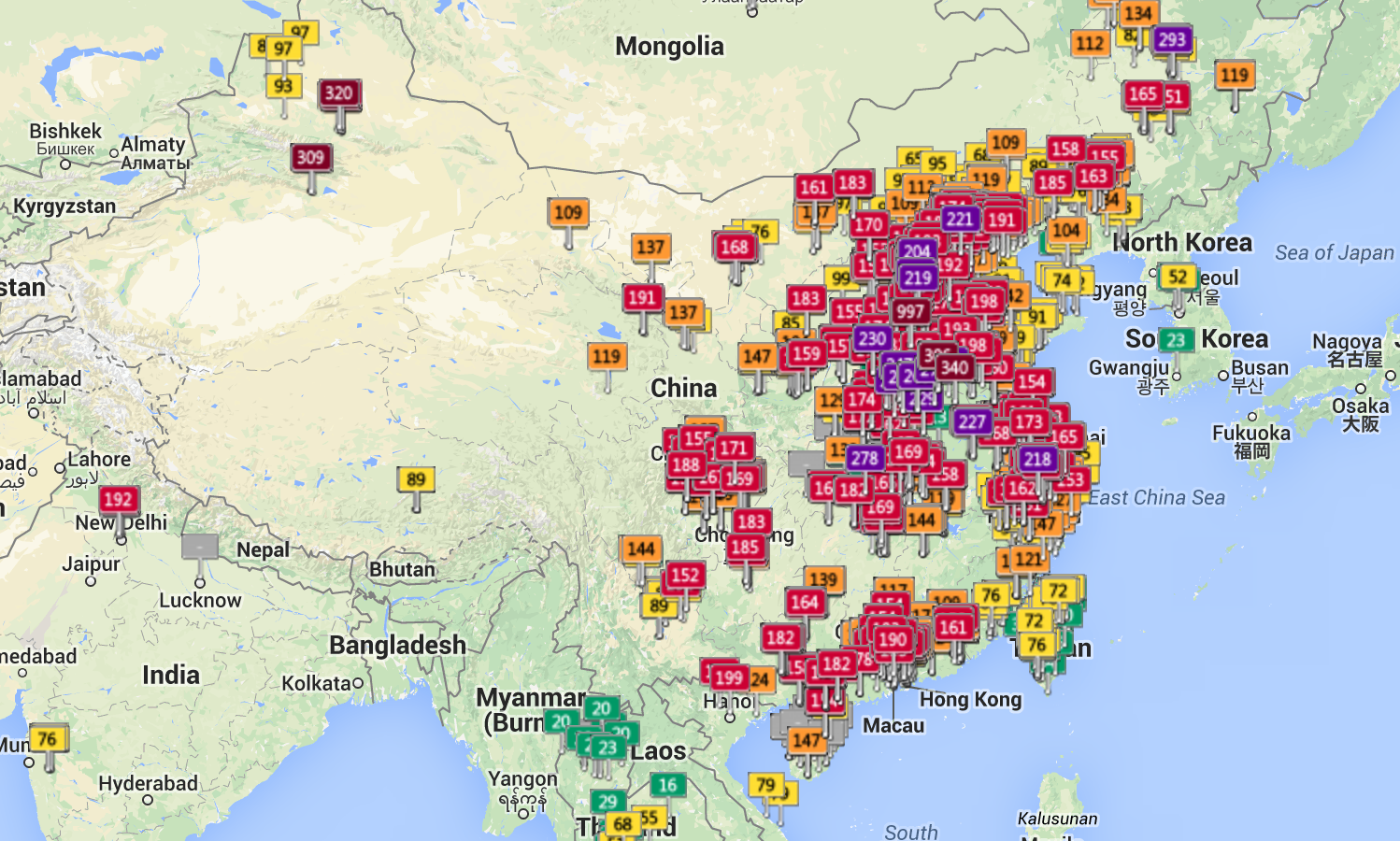 China, get your act together. Most of the country is in the red zone with a few places in the even worse purple or maroon. That needs to get fixed.

On the topic of fixing things, I wanted to publicly state how impressed I am with the way the WTC handled the post-cancelation.

All of us athletes get our choice of an entry into another race this year for just $100 (usually costs $700), entry to next year’s Lake Tahoe race for $100 or 50% off another race next year.

On top of that they opened up spots for previously full races, like Ironman Arizona. They are raffling away the 50 Kona qualifying slots and we all get a free lift ticket to Squaw Valley for this winter.

The raffle to Kona puts us all at about a 1/30 chance of racing at the world championship. Those are the best odds most of us will ever get.

Customer service like that is what builds brand loyalty. As soon as I got home on race day I started looking for other races. Since most of the remaining 2014 Ironman races were full and the rest were out of the country, I started looking at other options – races of the same distance put on by other companies. Had they not reached out with that offer, they would have lost me. Now I’m going to another Ironman race and will be wearing my Ironman gear proud.

I’m calling an audible. The game is changing. Lets look at how.

This is going to be the biggest change for me.

I have been training for 9 months to ride on hills. Lake Tahoe’s course (blue) boasts over 6K feet of climbing on the bike. Arizona has 2,500 (orange). That is a big drop. Arizona’s course is a lot less technical as well, it is three out and backs at a mild grade with a 300ft kick at the end. Much different than climbing Brockway Summit twice.

Even though the second chart looks steep, pay attention to the axes. The first covers 1,400ft, the second only 400.

In some ways this is awesome. Less hills will result in a faster ride time.

On the flip side, NOT having hills is actually mentally really challenging. On a hilly course you get to switch positions frequently between riding tucked on the flats, climbing on the hills and cornering on the downhills. By breaking the course up you don’t get as tired of being in one position for too long.

In Arizona I’ll have to be in my aero tuck almost the entire time. I haven’t trained for that and am going to need to get used to it fast.

It isn’t quite as flat as Florida or Western Australia, both options I might have ended up with if I didn’t get Arizona, but it is pretty darn flat.

I’m not even sure where to ride to practice flats as all of my training has been hills. This is going to be the biggest adjustment.

Another thing that I’ll have to get used to is passing people while in tuck. Since the course is three out and backs, but the third I will certainly be passing people on their second. I hear it gets quite crowded and collisions aren’t possible. I’m going to try and avoid that.

The final aspect of the bike to deal with is the wind. I hear it is hit or miss. I’m told 2008 was so windy the DNF record for that course was set but 2012 was calm. The good news about wind is it affects all of the competitors – I just want to make sure I’m even more prepared for it than they are.

People have described the run course of Ironman Arizona as unforgiving. The imperfect concrete path and heat probably have a lot to do with that.

Despite that, I think it is going to be much easier than what I was planning on.

Thankfully the lake we swim in for Ironman Arizona is cold. That means I get to use my wetsuit. I don’t think I could have made the adjustment to a non-wetsuit swim on such short notice. I’m not a strong swimmer so I’ve been depending on that buoyancy to help me complete the course.

One change I am excited about is having one loop instead of two. That will help avoid any instances of catching others and having to swim around them. I don’t think I was at risk of getting lapped, but it is good to know that won’t happen either.

I’m not, however, as excited about the water I’ll be swimming in. Lake Tahoe is pristine. I loved training in it and seeing the bottom crystal clear, even if it was 20 ft below me. I don’t think the run off reservoir of Tempe Town lake can boast that.

I am really excited to be racing 5,000ft closer to sea level. I found that at elevation my performance was hindered about 10% at my race pace. Now that I’ll be at a level with much more oxygen, I should be able to go much faster.

I live and train as somewhere between 0-2,000ft of elevation, so having a race in that zone is nice.

Additionally I won’t have to worry about acclimatizing before the race which means I can show up a few days later.

Since Ironman Arizona is in 8 weeks, I’m going to have to make adjustments to my training plan.

I have mixed emotions about the fact that I have to train more.

On the one hand I was really looking forward to being done and getting to relax. No more 6:00am swim sessions or 7 hour bike rides. In my original plan, this week was going to be all about catching up on some missed ice cream. That isn’t going to fly anymore and I’m kind of sad about that.

On the other hand, the competitor in me loves that I get one more chance. As I approached the race I started to have some regrets – I wished I had done more or X or tried a few workout of Y. Now I get another chance to do that and I’m really excited about that. I’m especially excited to train using my new heart rate monitor which I got only a few days before the race. Now I can actually get even better estimates for what to expect during the marathon by monitoring my heart rate on a few long runs.

Here was my original training plan. You can see that for the past 5 weeks I’ve been wrapping down my milage though my intensity was still high. I need to reverse that quickly unless I want to risk losing fitness.

What I am going to do is add in one more block of training followed by another taper. The next three weeks will be a replica of my hardest weeks of training. I’ll be at near peak volume of miles and full intensity.

I will then rest for a week and start the taper process over again. Hopefully a few more turns of the crank will get me in peak race condition.

It actually isn’t that uncommon to have two racing peaks during a season. When I got back home I hit the books and found some tips for doing this. I’m actually in an even better spot than the books talk about because I didn’t actually race. If I had, my body would be stressed now and need a break. Since the race was canceled, I got right back to training (once the smoke cleared).

When I committed to aiming for a Kona qualifying spot, I had Lake Tahoe in mind. Arizona is a different story.

First, my age group – Males 25-29 is the fastest one at Arizona historically. Additionally, since by volume there tend to be less Ironman participants in their 20’s, the number of slots awarded is much lower. Last year they only got 3. Surprisingly, the most popular age group is 40-44 and so they often get 5-6 slots.

Qualifying times for Kona over the past years for my age group have been in the 9:30 range and even as low as 9:15.

So what is my goal?

I’m going for it – I’ve got 8 weeks left and I feel great. No reason I shouldn’t shoot for the top.

I was aiming for 11 hours last weekend. Subtracting the 10% decrease the altitude caused would put me at 10 hours. 4K ft less of climbing on the bike should account for another 15 minutes. The final 15 I’ll have to make up in fitness, technique and aerodynamic improvements. I’ll be getting some feedback from a professional swim coach and professional bike fitter to help.

One thought on “Complete an Ironman: Update 12 – Ironman Arizona Here I Come”