My Thinking On Various Topics

Is Clinton Support a Gender Issue?

I just finished reading some great points in this Salon article about sexism and how it has changed/improved but not disappeared and how that relates to the Clinton campaign.

It bothers me that this is the key conversation about Hillary though. Her campaign is doing a great job owning the discussion, knowing that most people don’t want to be sexist & using it as a sort of shame tactic – ‘if I don’t vote for her they say it means I’m sexist, so I guess I’ll vote for her.’

The fact is, millennials don’t support her because they don’t trust her – that is what they keep telling everyone. She is viewed as the least trustworthy of all of the candidates – including Trump.

It isn’t surprising. She is involved in (as of my last count) four federal investigations and won’t answer important questions about connections to large institutions that the same millennials also don’t trust. Male politicians and CEOs often resign for much less than what she’s being accused of.

Making this a gender issue would be as unfair as making the 2012 election about gender. The reasons most people did not want Palin to be VP wasn’t because she is a woman, it is because they didn’t think she was/is competent based on her actions and words.

Most people actually think she is quite competent. This isn’t the subtle sexism described in the article. The ‘oh, you run your company all by yourself’. This is cut and dry – people think she is the most qualified but the least trustworthy and the fact that they are voting for Bernie shows that trust is a higher weighted issue with them right now. 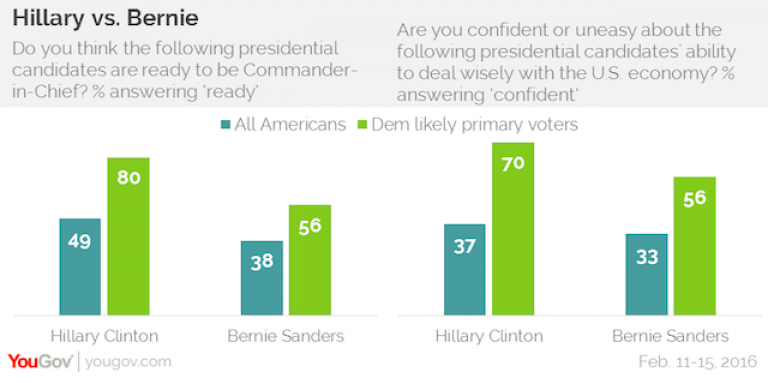 Overall, this conversation about sexism and how it relates to this election seems like a simple case of bad sample size. We have one woman running for president and are using it to extrapolate our feelings and actions towards 50.4% of the population. Perhaps if a woman that was deemed trustworthy and competent was running, we would have a better indicator of the current state of gender related biases – which absolutely still exist.

Lets keep working on discrimination and gender bias. Lets get a woman in the oval office. Lets not sacrifice our values in hopes of jumping at the first chance to do that.