How Are You Liking Seattle?

Since I moved to Seattle six months ago, I’ve frequently been asked one question.

“How are you liking Seattle?”

Sometimes it is just meant as a polite question. Perhaps I’m catching up with someone from work or an old friend. Asking about something recent in my life is a nice gesture. There are even time where the question reflects real curiosity. With the cost of living in the Bay Area continuing to rise, many people are fleeing for the north & looking to gather some data before they make the move. Often the question is honest. There are people that truly care about my state of being and how I enjoy the place I live.

I don’t mean to be impolite. Nor would I want to point someone in the wrong direction – many people love it up here. But when I’m honestly answering an honest question, my answer isn’t completely positive.

Seattle was always intended as a temporary trial for our family. We figured we’d try it for a year or two. Though we didn’t rule out the idea that we might love it and want to live here for a long time, we figured that wouldn’t be the case.

Sometimes even making it through a year seems impossible.

I’m not a rain person. Nor a cold weather person. I grew up in San Diego. I wore shorts & flip flops every day. I have never developed the habit of checking the weather because San Diego doesn’t offer surprises.

Now I have to check the weather. That is a new habit. Not a delightful one. Here is a screenshot I took earlier this year. I didn’t even know there were that many ways to describe rain. (Bonus points if you know the difference between ‘Showers’ and ‘Light Rain’) 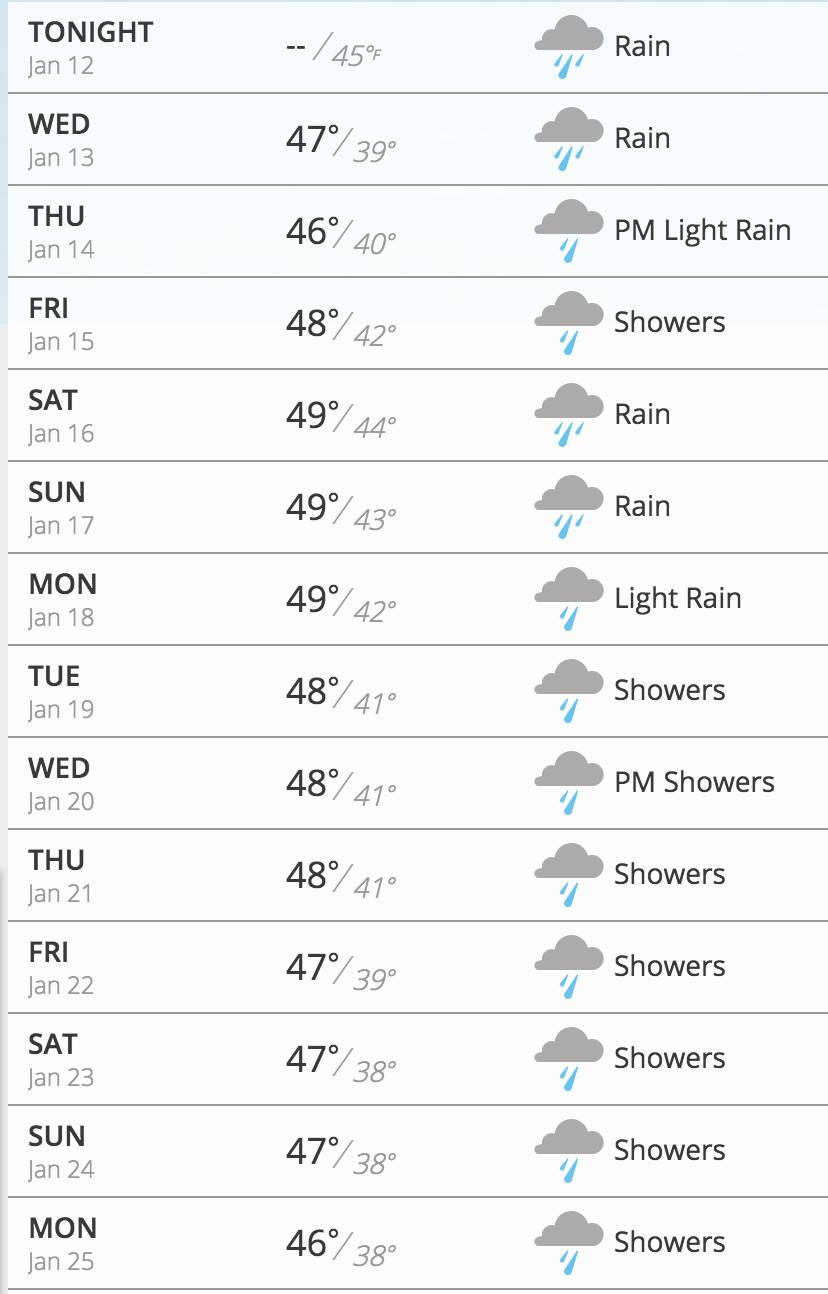 I’m a sunshine person. I like keeping my hair long and sun-bleached. A trophy of the time I spend outside. In fact, being outside is something I value so much that I track it in a spreadsheet. Seattle has very little direct sun, only a few days a month in the winter aren’t cloudy. The days are pretty short too – in the winter we only get ~6 hours of full daytime.

Here are some great charts that show the difference between Seattle & San Diego. I’ll include a few of my favorites. The difference is so stark that I don’t even need to tell you which side is which. (Note: I skewed the second image because the & axis scales were different, now they line up better) 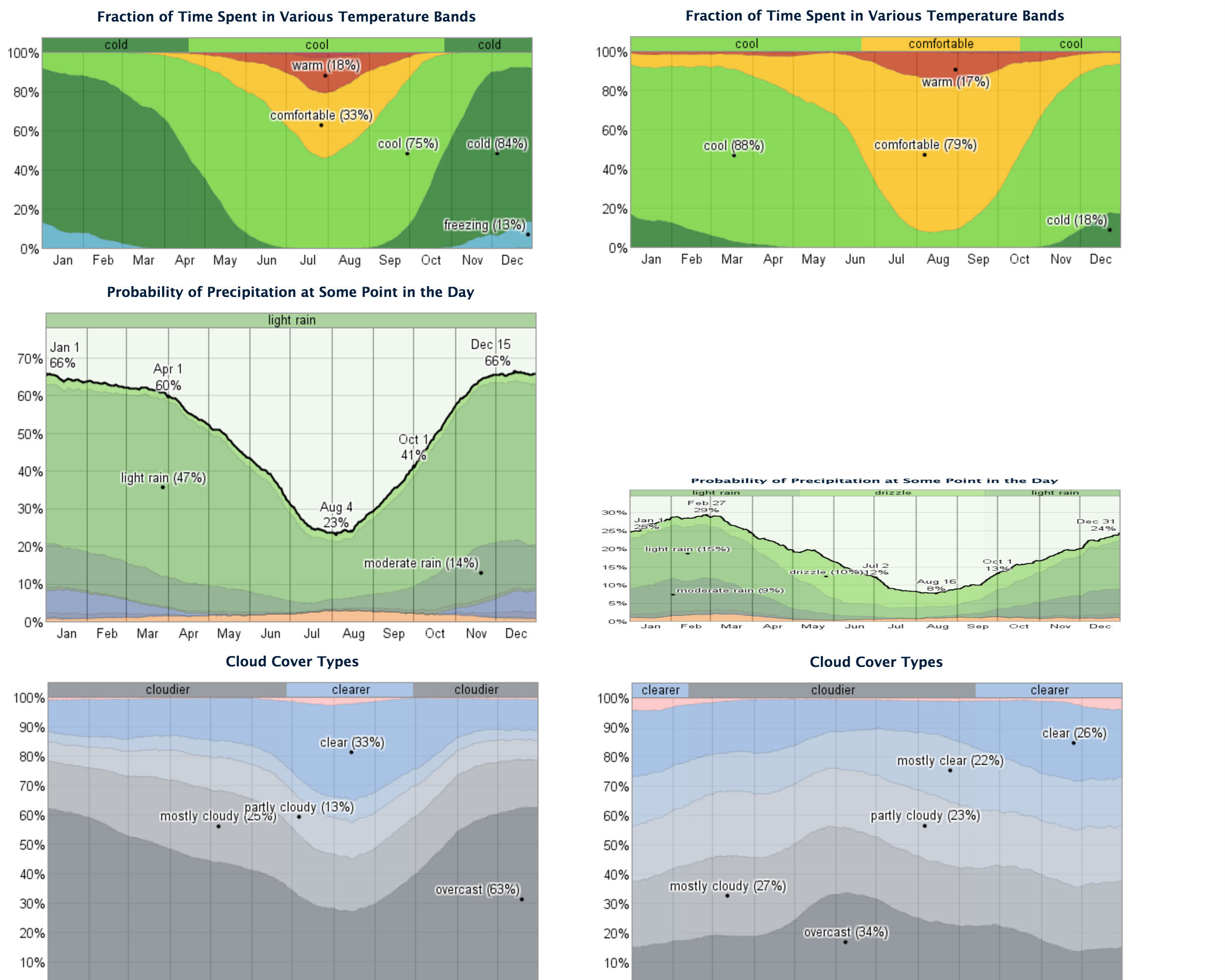 Sometimes charts can say it better than I can. It is just colder, wetter and cloudier here. In fact the Seattle summer, which everyone looks forward to, is really comparable to a San Diego winter.

There is, of course, no surfing in Seattle.

It isn’t all bad though. There are plenty positives about Seattle. I wouldn’t be here if there were not.

Seattle is much more affordable. For a little more than the price we’d be paying now for my old 400 sq/ft studio apartment in San Francisco, we’re living in a two bedroom house with a finished basement, yard and garage. Nearly 4-5X the house.

There is also no state income tax, which is nice.

When it is sunny, hardly a place compares to Seattle. The blue water of Puget Sound with green trees surrounding it white snow-topped mountains in the distance. Every time I see it I have a glimmer of hope.

Mt. Rainier, when it appears, is a thing of beauty. Few mountains stand alone in such stark fashion. Its glaciated cap towering above the city, even as it stands 100 miles away. If I had write an equation for my attitude toward Seattle, my enjoyment of it would be equal to the percent of Mr. Rainier I can see on that day.

For my family, we have direct family here. That is what drew us. My wife’s sister is here with her family, including young boys similar in age to ours. Since they are both full time moms, they are able to see & help each other.

Even outside of them though, everyone seems easier to connect with. People live at a slower pace here – kind a like a more open-minded, crunchy, mid-west.

Compared directly to San Francisco, an extremely transient city, people in Seattle also seem more planted and thus willing to get to know the people around them. It is hard to want to get to know your neighbors when they are renting and likely to move out in a few years. It is easier when most people are in homes they own and intending to stay for a bit.

Behind all of these thoughts is a larger idea though.

Seattle isn’t a place I would chose to live on my own accord. As a family man, however, I can’t make decisions solely on what I want any more. Each drop of rain is a cold reminder of that. Sometimes it is the reminder of that fact and not the rain that is hardest to come to terms with.

I have to remind myself of the other side of the trade-off. The reason I gave up that freedom in the first place. The family I have waiting for me at home. The mutual joy exchanged by wrestling on the living room floor or kicking a balloon around.

It is getting better. We’re through the worst of winter and every week brings a new glimmer of hope. Flowers and trees are blooming. The days are getting longer. Summer is almost here.

2 thoughts on “How Are You Liking Seattle?”