In 2017 I set a goal to spend 7 hour a week outside with at least one other member of my family. As I’ve tracked this throughout the year, most things have been pretty straightforward, but on many occasions I’ve run into a situations of ambiguity.

Am I Inside or Outside Right Now?

Reading in our living room? Easy. Inside.

Throwing rocks into the water at the beach? Again, easy. Outside.

Sleeping in a tent in a National Park? We’re sort of ‘in the great outdoors’ but we are inside of the tent. Does that thin sheet of nylon make us inside?

Sitting on the porch eating? What if the porch is covered? What if it is also screened in?

At what point do we cross over from inside to outside?

Is being deep in the woods more outside than sitting on top of a 100 square foot patch of grass in front of our house? Is a rooftop in the city as outside as a dock on the lake?

Is being in a natural cave inside or outside? Surely it was the first sort of inside that humans lived in, but being in a cave seems pretty outside-like these days.

What we’re presented with is the idea that outside is less of a binary and more of a spectrum. I’ve come up with a rough litmus test to help me define the outside-ness of an environment.

As the number of those statements that are true increases, so does the outside-ness of a place.

Thinking back to my examples from earlier in the post.

Is being deep in the woods more outside than sitting on top of a 100 square foot patch of grass in front of our house? 7/7 vs 5/7. So, yes, it is more outside.

How Can We Use This Litmus Test?

Aside from measuring the outside-ness of the place we are, this litmus test can also be used to help us design our inside spaces feel more outside.

I personally feel more at ease when I am outside and so increasing the outside-ness of the spaces I most often occupy would likely contribute positively to my mental well being. This makes a lot of sense, our species has spent most of its existence outside and is better adapted for that. We can’t expect to be fully comfortable in a space that our bodies are not optimized for.

Probably because of that, the idea of space that blends inside and outside has fascinated me when I’ve encountered it.

Visiting the famous Frank Lloyd Wright designed Falling Water, I was fascinated with how there was a stairway from the living room leading down to a river. At the top of those stairs, with the glass closed, the outside-ness starts at 2/7 and as you open the glass, and walk down the stairs, your outside-ness increases to 6/7. 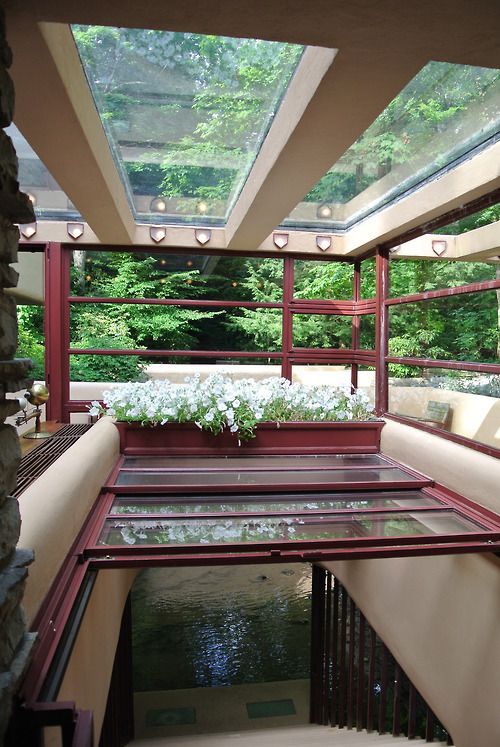 I will periodically stumble across other images of houses that blend inside and outside, like this one, a house with a tree growing in the middle of it. It would seem that just a step, not even through a doorway or barrier, could put you from 2/7 to 6/7.

I’ve seen other houses with interior courtyards, retractable roofs, sliding walls or no walls at all. In places where the weather creates a habitable temperature, rainfall is light and bugs are rare, it might be possible to design a living space that doesn’t have very much inside at all.

Would we be happier if more of our living spaces were a bit higher on the outside-ness scale? What would the downsides and challenges be? How could we minimize them? Would they be worth the benefits produced?