Better every year. That is my goal. I believe that through focused effort I can keep improving and ensure my best years are still in front of me.

With that in mind, at the start of a new year, I take the time to set my focus for the coming year. By being selective about where I direct my energy, I can achieve results that are exponentially greater than if I split my attention.

This is the sixth and final year of my current sabbath cycle, a six year period where I am focused on preparing for my calling.

As I entered this six year stretch I had the belief that there are four generic skills that are highly valuable to do anything well;

In essentially everything I do, success comes down to those four things – winning a marathon, growing a billion dollar business at Google, surfing mavericks, living in a studio apartment with two kids, fasting in the wilderness for two days, etc.

In my current chapter of life, I want to improve my proficiency at each of those generic skills as a way to better prepare me for whatever challenges I decide to take on in the future. With that in mind, last year I focused on the skill of forecasting, the ability to have an accurate picture of what might happen. This year I want to focus on strategy, the art deciding how to approach the situation in order to achieve a goal, given limited resources and many things out of our control.

My goal this year will be to learn more about strategy, to figure out what the common patterns are, how to improve them in myself, and how to be a skilled strategist. I am not completely unfamiliar with this subject – I generally am very strategic in my thinking, use strategic planning often at work and love playing strategy board games – but I’ve never formally studied it. This year I’d like to apply some more rigor to my pursuit of understanding strategy so that I leave the year more skilled than I enter it.

I have avoided chess for a long time. Though it is regarded as one of the best strategy games, in my experience it isn’t super fun to play because often, with the types of players I compete against, the winner is the person who has spent the most time studying. I tend to prefer to play games that aren’t as well studied so the activity is more about deducing the optimal strategy rather than just following heuristics discovered by others.

Nonetheless, this year I’ve decided to take on chess to see how good I can get in one year. From some quick reading it seems like getting to Master level in a year would be unprecedented, so I’m going to aim for an expert level, which is roughly described as the top 10% of players.

This challenge is a bit meta for me because along with chess being a strategy game, I’m going to have to design a strategy to let me improve the most in a short amount of calendar-time and with limited wall-time invested.

As of today I’d describe myself as below average for someone that plays chess – something I validated by playing a few online games and watching my skill score drop from the starting level of 800 into the 600s on the Chess.com Rapid rating system. Though I learned to play chess as a kid, and perhaps can be described as the type of kid that would have fit the mold, I haven’t put much effort into learning the optimal strategies.

My starting point for the year is pretty basic. I know the moves pieces can make including more complicated tings like castling and en passant. I know that it is important to control the center of the board. I know that you want to always defend your pieces and make sure they’re not moving to places where they are left alone and vulnerable. I know that trading pieces is a common part of the game and that generally there is a value associated with pieces where the queen is worth more, the rook, bishop and knights next and then pawns at the bottom. I know there are names for approaches like the Queen’s Gambit or the Sicilian defense, but I couldn’t show you exactly what those are. I can execute a few important tactics like the the rolling rook strategy to get checkmate. Basically, if you know the rules to the game but have never played in a tournament, I’m probably about at your level right now. If you were on the chess team at your school at some point or ever went to a tournament, you would probably beat me.

We’ll see how far I can progress in a year, hopefully I’ll at least be above average, and if things go well, I might make it into the top 10% of players.

One way to get good at things is to spend a lot of time practicing it and marinating in environment rich in it. As I formally study strategy, I want to also input a lot of strategic analysis into my brain to give me material to mentally chew on. For my habit I’ll be devoting one hour per week to reading strategic analysis.

I’ve found most strategic analysis is either related to military or business pursuits (somewhat correlated with the century it was written in) so I expect most of my reading will be of those types. I suspect HBR articles, industry analysis, military briefings and such will all be a part of that reading.

By the end of the year I’d like to be experienced enough where I can be critical of the analyses, have a few extra frameworks to draw from and be skilled at adding my own red arrows to images (apparently that is a big part of strategy according to Google image search).

The list of the great strategists of all time is full of military and business leaders. Many would be fine examples, but Genghis Khan stood out as he is known for defeating much larger armies with a scrappy crew. I tend to like being in that underdog position, so I think I’ll have something to learn from studying his strategic approaches.

None of my exemplars are without controversy, (who really is?) but Khan is the first of my exemplars that is responsible for millions of deaths, so I’m sure there will be some sensitive aspects and other areas I steer away from completely in my study.

Khan will be the most ancient exemplar I have ever focused on, so it will be interesting to see how much relevant material I can find. As I understand, he never even allowed an image of him to be made during his life (so the image above might not be accurate, but I decided to use an image anyhow). He is accomplished enough, though, that many people have attempted to write biographies, film movies and even create historical fictions based on him. While some of those will be enjoyable, I’d like to make sure I’m getting at content that is accurate and not apocryphal, so the lessons are actually applicable.

My bucket list item isn’t always related to the theme, it is just something I want to cross off my bucket list that year. I figure if all else fails in a year but I accomplish a bucket list item, I at least have one thing to show for it.

For 2023 I’m going to attempt a SUP trip into untouched wilderness. In 2020, I previously did a 100+ mile SUP and running adventure on Ross lake, a part of a National Park that sits on the border of the USA and Canada. It was difficult, remote, and beautiful, but it certainly wasn’t untouched or unexplored. There were signs, trails, docks, bridges (like in the pic below), road access on either end of the 20 mile long lake and even installed pit toilets at the designated camping spots. I was able to read up about it ahead of time and I saw other people there (though I was the only SUP and I certainly covered more distance in a shorter time than anyone I talked to). 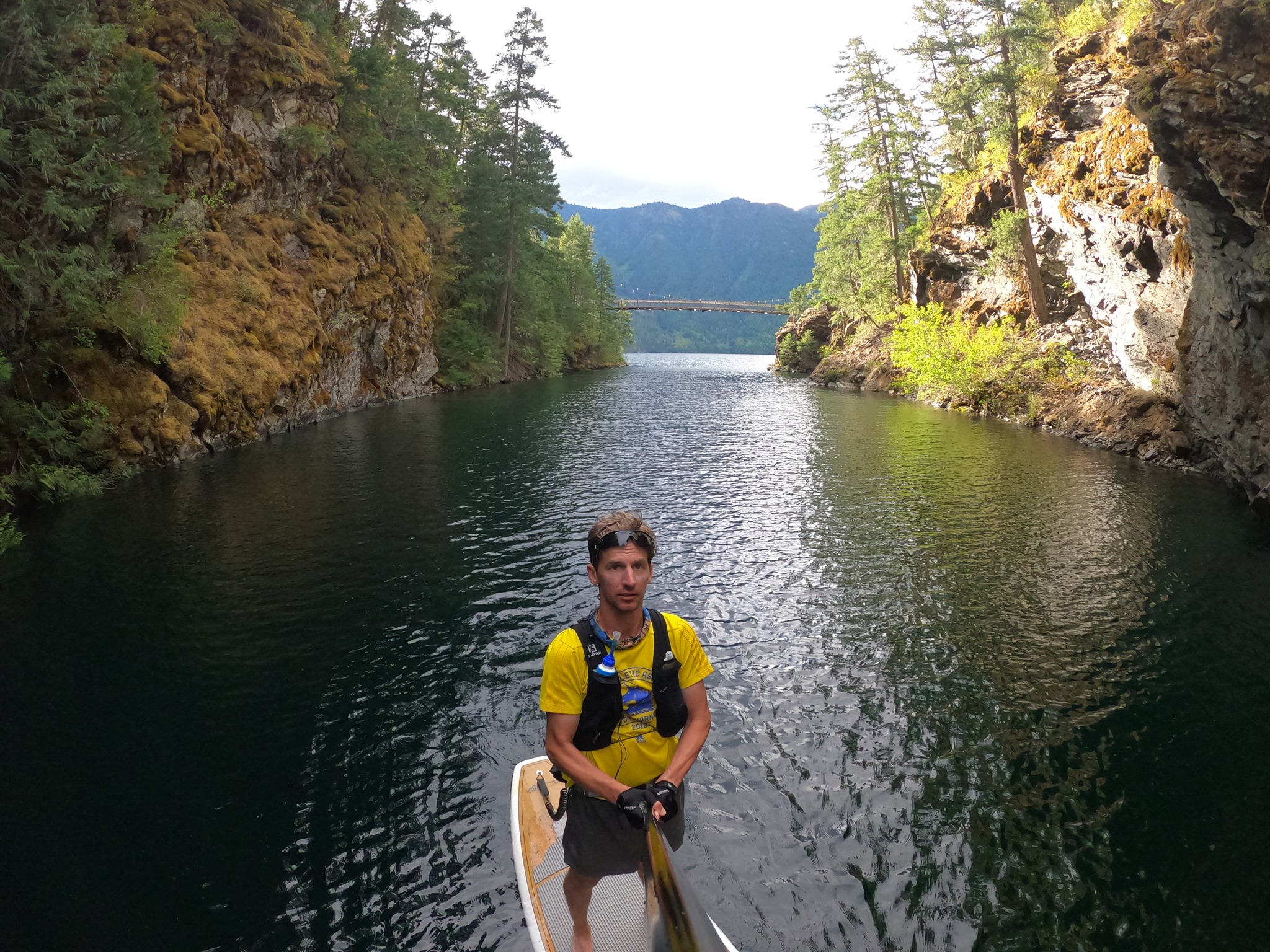 This year I want to go to a remote place where there are are no roads, no signs, no trails and generally no sign of humans ever having been there. In a way I’m evolving from, ‘I did a difficult thing that other extreme people do’ past ‘I strung together a few difficult things to do something unique’ on to  ‘I did something both unique and uncharted and explored a place that I’m not aware of anyone going before me’. Maybe I’ll be lucky enough to find a spot where I’m the first human ever to step foot. The type of place where you would need a helicopter to get to if you weren’t crazy enough to paddle a hundred+ miles and walk through the woods. Maybe even a spot a helicopter can’t easily get to, just to ensure it is unique.

Safety will be important as I embark on this journey because the most important adventure is always my next one. Along with a few items of new gear, I expect I’ll be making good use of some that I already have. I’ll certainly need backup supplies, my emergency satellite transponder, emergency gear and bear spray. Perhaps a gun.

I have a few ideas that are fairly close to home (one of the benefits of living near the corner of the country) and am excited to plan this one a bit more as we get into the year.