The idea is simple. My wife enjoys fresh flowers. I like my wife and thus want her to be able to enjoy fresh flowers. But I never think about flowers apart from anniversary’s, valentine’s day & her birthday.

Surprise Flower Club solves this. The service will deliver flowers on a somewhat random basis to the specified receive.

I think this is a great idea and I would sign up myself. There are a ton of questions surrounding the whole thing though:

If I were starting this business the traditional way, answering those questions would be my first priority. One by one I would tackle them myself or bring on an expert to help.

Focusing On What Matters

I don’t like traditional though. Before I worry about the rest though, I can tackle the first three. If the answer isn’t yes to all of those, the rest are moot – there is no opportunity. Let me stress that again. The only thing that matters at this point is figuring out if people are interested in this service enough to pay for it. Everything else is local optimization which I can worry about later.

In order to answer the most core question – I”m going to start by getting a feel for the interest.

b) does anyone fill out the interest form, this will let me know if people like this solution

c) when I use the interest form with real $ required, this will tell me if they like it enough to pay for it 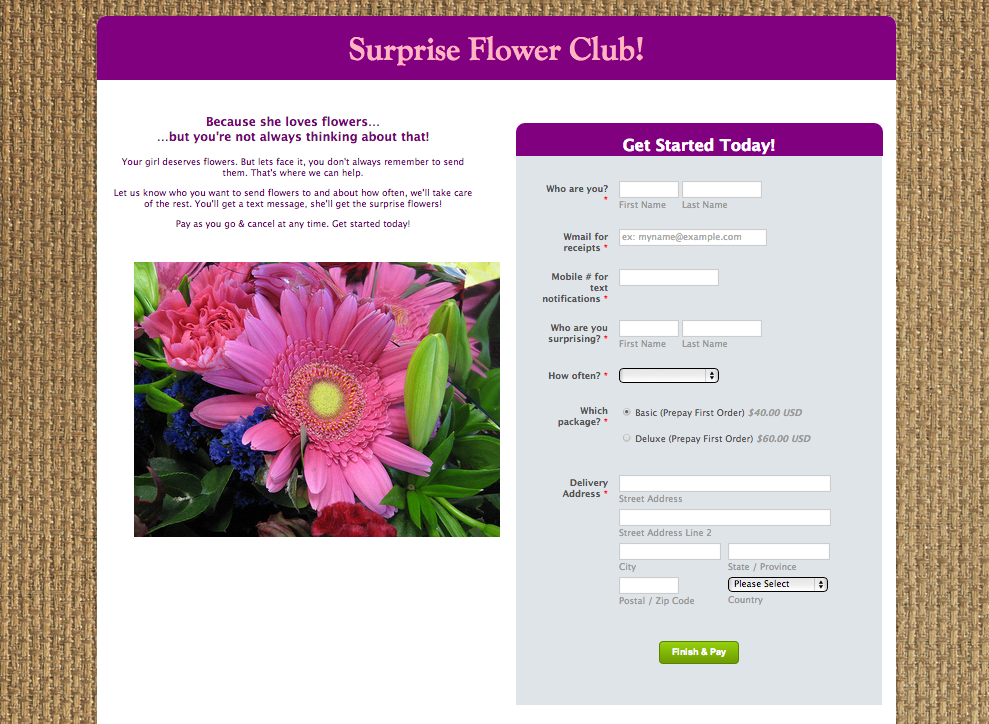 Now, you might ask what is going to happen to all of the people that fill out the form and buy flowers from me.

Those people are going to get flowers just like they expected they would. But how? Did I build in a back end CRM system with random delivery logic and API integration to a flower delivery service? No, its cooler than that…

I have a spreadsheet that I keep track of things in and I will manually call flower shops to have bouquets delivered.

Yes, it will take a lot of time.  Since I don’t have any deals pre-negotiated, I might lose money on a few orders. I’m perfectly ok with that – it is well worth it to spend a few hundred dollars to figure out if something is going to work or not. It is much easier than spending hundreds of hours trying to figure out all of those details first.

If & once this manual process becomes so time consuming that I can no longer do it myself, then I’ve found a company. My first step after that will be to automate everything.

Even if the tests come back negative, that might not indicate the whole things is a wash. Maybe the idea was right but the branding was wrong. Or maybe the shortcut I took by using PayPal to process payments hindered conversion. By closely looking at each step of the conversion process though, I can figure out if it is worth tweaking and taking a second pass before giving up. Sometimes a great idea is hidden just a few layers down if you listen to the data.